en.infoglobe.cz » CZ, Tok: The Highest Peak of the Brdy Uphills

Both Bohutin and Kozicin can be the starting points of a trip to Tok.. In both villages you can park your car or get there by bus. From the starting point, go to Pilska water reservoir. From here the path continues along the blue tourist sign to the crossroads of Pilgrim Well. Here you can go to Nepomuk and Skelna Hut. To reach Tok, however, continue straight. After less than 1.5 km of walking, take the forest path named Cihadelska. Once you cross it you will get almost below the peak of Tok. At a place where the road sharply shifts to the left, turn to a wide forest path. After several tens of meters, you will come directly to the edge of the former Tok military shooting range. 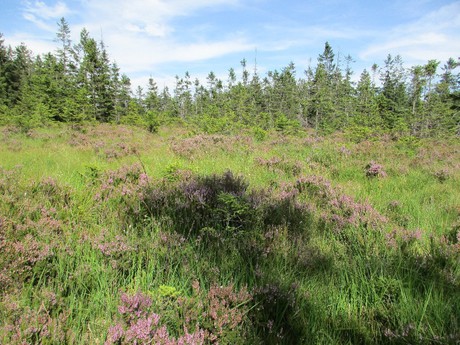 The place is heavily covered by heather and has such a mysterious atmosphere. Tok is just a short walk away. After the beaten track, go down to the moor, around two hunter´s cabins and continue on the forest path. It will take you to the crossroads of forest paths just below the very summit of the hill. From this place, go straight pn and after a few minutes walk you reach the finish line. The top of Tok itself looks inconspicuous. It is marked by a stone pile with a cross and a sign on a tree. The peak is very elongated and flat, the highest point lies at an altitude of 865 m. From time to time Bohutinsky peak (843 m) is considered the second summit of Tok. 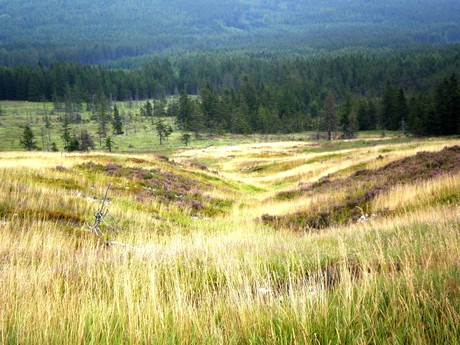 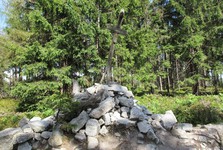 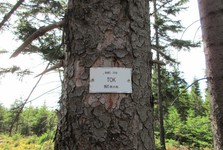 Up to Tok from Obecnice

You can also reach Tok from another village on the outskirts of the Brdy National Park. The car can be left in Obecnice or you can get here by bus from Pribram. The trail to Tok goes around one of the waterworks in the Brdy area. The reservoir goes officially by the name Obecnice waterwarks yet everybody calls it simply Octarna. The path leads along the forest asphalt road called Obrazenecka and Rusinska. It will lead you to a place where the road turns into a forest trail. It rises steeply on rocky terrain. After climbing this stretch you will join a somewhat wider and more comfortable forest path. On the right side, there is Senik pod Tokem cabin which is hidden among the trees. After about 1.5 km of walking along the Cihadelska forest trail , you will reach the same crossroads of the road and a forest trail. 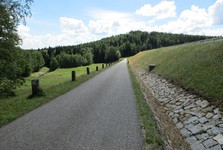 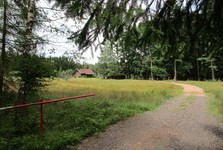 More able tourists and hikers can besides Tok also visiting the ruins of Valdek Castle and continue to Horovice. From the Town Hall you can also continue to Jince. The train station is about 9 kilometers away. Tok can also be reached from Strasice. 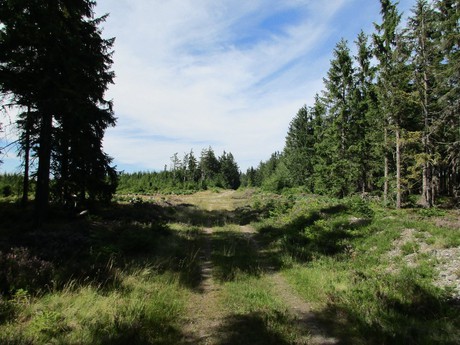 What to Be Beware of? 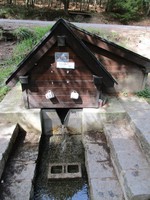 During this tour, you will hike through the Tok shooting range area. Although there has been extensive cleaning and searching for dangerous ammunition that has been left since the times when there was a military area, it can not be ruled out that there has been something left in the woods, so I recommend moving only on marked trails. Please also note that hiking trails are still under way. Missing signposts and tourist signs often emerge in the middle of a forest, and they are still as mysterious as they are. I definitely recommend a good tourist map. Also note that there are no snack chalets in the area of the central Brdy. You only have it in the villages on the edge of the area. You will find a number of wells, from which you can safely drink. If you set out to here in the autumn, you won´t have to deal with this, but do not forget that the Pilsen Reservoir and the Octarna serve as reservoirs of drinking water, so swiming is prohibited.