This amazing medieval structure was completed as early as the 13th century above River Jihlava. Originaly this one was a church dedicated to the Assumption of the Virgin Mary and belonged to a Benedictine abbey.   klášterní kostel benediktinského opatství. However, the war between Jiri of Podebrady and Mathias Corvinus radically influenced the life of the abbacy which ceased to exist effectively. The church was deconsecrated. For over 200 years it was used for non-religious purposes. The neighboring Benedictine church was rebuilt into a chateau by the House of Valdstejn in the 16th century. The Museum of Vysocina is now housed in the chateau.

The basilica was renovated during the Baroque period. Yet it has been preserved till the present mostly in its original architectonic style which carries the traces of the Romanesque and Gothic styles. Experts regard apparent influence of both German and French architectonic schools. Moreover, any layman will appreciate the amazing interior. 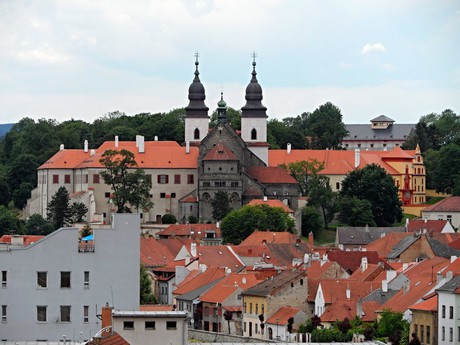 Even those who haven't been inside the basilica can get an idea how does it look like for it was featured in many historic movies which are popular among audiences. One of them was, for instance, recently opened Vote for the King of the Romans. In the movie, the basilica represented Notre-Dame cathedral in the scene where Charles IV marries Blanche of Valois. In the movie about Jan Hus, the crypt in the basilica represented the place where Jan Hus was interrogated in Konstanz. You can recognize the basilica's interiors in other historic movies such as Marketa Lazarova, V erbu lvice, the Night Time Guests &c. 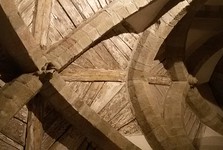 You enter the cathedral through Romanesque portal (similar to the one at St Stephen's, Wien) dubbed the Gate of Paradise. Behind the gate you enter the 13th century. Inside, there are three aisles made of granite and sandstone. The interior is open to the public off service hours. You can see it alone or take a guided tour (in English, Czech or German). I recommend you the tour. You will learn a lot about church's decoration, Baroque statues, pulpit, baptismal font, and be sure to visit the crypt. The latter is the oldest part of the strucutre and it has preserved its original timbering at some parts of the vault. There are thirteen decorated columns which support groined rib vault above vast space. One of the greatest experiences here is the Church Night. You can see the interior illuminated with candles and you will experience here even a service. Also, visit the "dwarf" gallery situated in the gallery along the upper part of the presbytary's wall. The entrance to the gallery is a small door up on the narrow spiral staircase. When exiting the gallery you leave by the similar staircase on the other side. The gallery is really small. 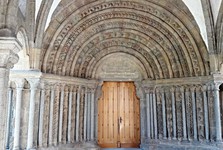 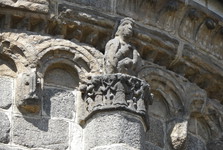 And lastly the mystery – in the labyrinth of underground corridors, there is a Benedictine treasure. When the troops of Jan Zizka approached Trebic, the abbot ordered all precious things to be packed and hidden. Even though Zizka never plundered the place the treasure remained hidden and eventually it was forgotten. Shhh! Don't tell anybody.

itselft, there is amazingly well-preserved quarter, once a Jewish ghetto. This is the only Jewish sight (except the city of Jerusalem) which is listed in the UNESCO's sights list. There are altogether 120 houses which have been built beginning 17th century and ownard.  The houses are small, cramped one next another. People still live there yet many are now restaurants or nice cafes. Criss cross all streets, walk through every pasageway and try to wander so long until you reach the visitor center. Visit the Zadní Synagogue which neighbors the center. There is 1 : 100 scale model resting on the women's gallery. The model depicts the quarter in the 1850s. Audio descriptions to some of the most important structres are available at an infopanel. Seligmann Bauer's house neighbos the synagogue. Inside there is a little kosher butcher's shop museum. There was everything in the quarter – town hall, synagogues, school, mikvah, hospital, sloughterhouse... Do not expectate anything sort of an open air museum. The houses are populated so you can't go anywhere you want. Those who are interested in detailed information and wants to learn more about the life of the Jews and Christians one next to another in Trebis should visit the Following the Trails of Abbots and Rabbis educational trail. The trail has 12 stops, goes across the city so infoboards related to it could be found also on random basis. 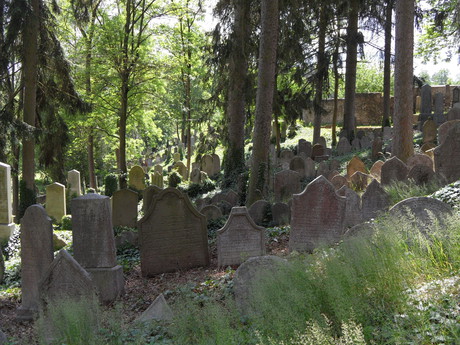 Go down some of the side allyes in the Jewish quarter in the direction to Hradek The direction boards lead to the Jewish cemetery. If you enjoy atmosphere of such places you will like this one. The estimated number of tomb stones is around 3000. Hebrew inscriptions are waiting to be read and disseminated by somebody. The oldest tomb stone was put here in 1625. So, where were people actually buried before? Well, nobody know. As you can see there are still many mysteries waiting to be solved. 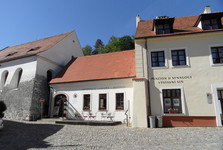 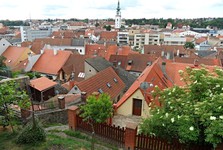 Lastly onto the observation tower

One day is enough to explore Trebic. I recommend to have a bird's eye perspective over the city. There are several options where you can do this. There are several great outlooks on Hradek hill. It is a pleasant experience to hike there as you walk along the river in the nature. The trail takes you around the Zizka burial mould and the ruins of a defense tower.

Perhaps you will be interested in visiting Charles' square in the city center. Close to the square, there is the municipal tower at St Martin's church. Up at 35 meters above the ground, you can have great vista over Trebic. 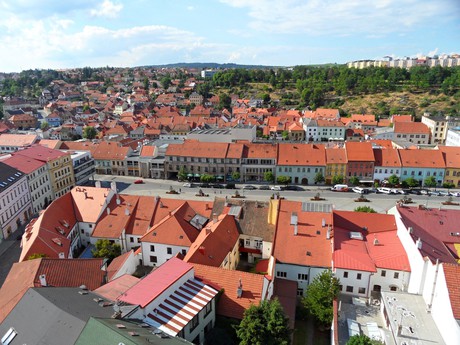 There is a third alternative, the observation tower on Kostelicek hill. The tower was built atop the torso of former water tower. You can reach the tower by followin a green tourist trail. It is about half-an-hour of walk from the city center.