Published: 12.5.2016
Spirit of true genius will remain around Zelena hora at Zdar nad Sazavou unless a church which stands there is removed. It is the embodiment of the spirit of bold, talented architect Jan Blazej Santini Aichel.

Today we take a look at a place where stands an exceptional work of Baroque architecture which has a place on the UNESCO’s prestigious list of world’s cultural heritage. It is church of St Jan Nepomucky on Zelena hora. It is unlike any other building in Bohemia. Santini, a small, physically handicapped master of architecture brought to life his bold vision inspired by Christian kabala, which respects symbols and hidden works of our world. He did it here between the years 1719 and 1722. This was an order by the abbot of local Cistercian cloister Vaclav Vejmluva. He admired Jan Nepomucky even before he was beatified. (To add- Jan Nepomucky died a martyr by the hand of Vaclav IV’s servants; Nepomucky refused to broke his oath and reveal confession). 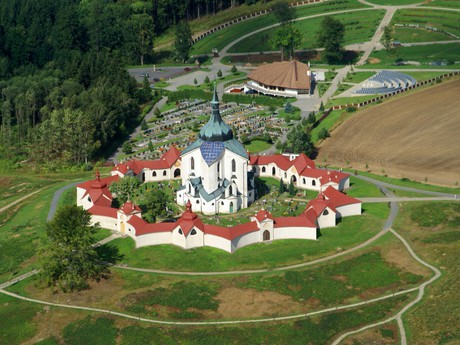 In 1719 preserved tissue (disputably a tongue) were found in the tomb of Jan Nepomucky inside St Vitus cathedrla . The abbot recognized it as a clear signal to start the construction of the church to honor this martyr. Santini had very clear instructions. Therefore, he could apply the symbols related to the saints, mostly five stars which appeared at the moment of his death. Santini loved to work with numbers and a pair of compasses. You can count fives many times at Zelena hora. The second number of his choice was the number three which symbolizes the Holy Trinity. The church is built on the five-pointed star base a. It closes up at cloister of a ten-pointed star with five gates and five chapels. The major statue inside the church is, as you can imagine, St Jan Nepomucky. He stands on the globe and raises to the heavens. The five eight-pointed stars of the Cistercians symbolize five continents across which Christianity spread. A case in the shape of a tongue sits at dome’s highest point. Inside is a bit of a bone with tongue tissue. Some windows in the church are also of the tongue shape. Other windows look like bishopric mitre. This remembers abbot Vejmluva. Another regular three-pointed shape is a symbol of the Holy Trinity. 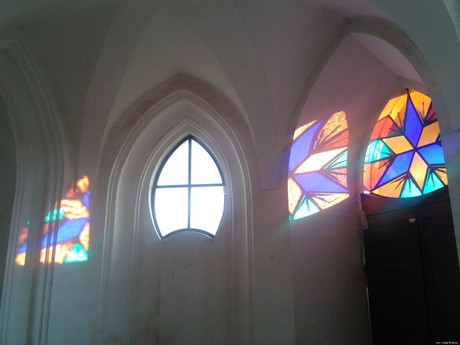 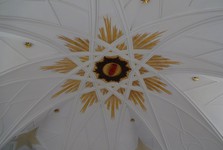 Inside the church, there is a vast amount of symbols and references. Adherents of  hermeticism and its disciplines or St Jan's admirers frequently discuss these. However, even mathematicians, numerologists are amazed by them. Architects find their inspiration in them and historians are excited to study them. Every arch means something. Every detail is a reference to something else. Once you stand alone inside the church try to focus on the effects of light coming through the windows. Indeed, the guide points out to anything you shouldn't miss. The season starting April till October is the season you can take a guided tour. The tour is available in English as well as German.

The courtyard between the church and cloisters used to be a cemetery. Today, there is an initiative to move the graves to a new place at the mountain. 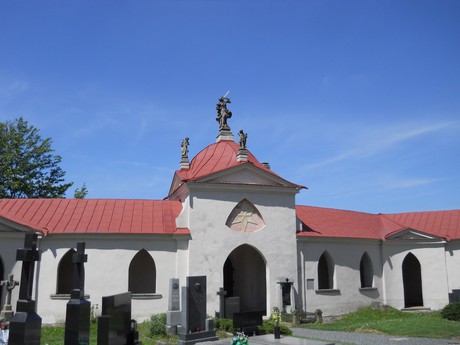 The name Zelena hora (Green mountain)? Well, originally the place was called Cerny Les (Black forest). It was wiped out before the construction began. Today, the mountain is maintained treeless so the church wouldn’t be in the shadow. The name Green mountain refers to Green mountain near Nepomuk. It is the place where the saint was born. Even back then there was a Cistercian cloister.

There are two trails which one can follow in case there the weather is good. The trails are not long (no longer than 3 kilometers). Wheelchair or stroller ride good on them. There are beautiful views along the trails. By following them you can get to Lyra homestead or Dolni cemetery. Santini took part on construction of these objects. Another point of interest is the chateau of Zdar. Originally, it was a Cistercian cloister later rebuilt into a castle. 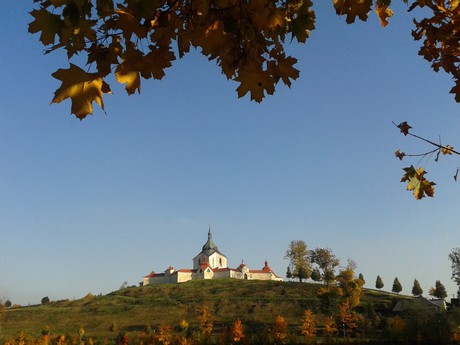 To conclude our story on Santini. There is nobody who would know about his work and ask about individual life experiences and life story of this master. In 1677, he was born to the family Master Santini Aichel and his wife who lived in Prague. It was expected from the first born son 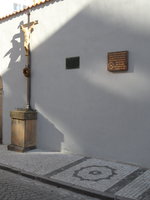 to follow his father’s life path. However, it was clear that his physical handicap would posses an obstacle to his would-be carrier. However, initial disappointment quickly vanished once his talent for art became apparent. He learned to be a painter and architect at once. Once he returned from a three year journey to Rome, he started to work at a cloister. Therefore, we can see his work in Plasy, Kladruby, Marianska Tynice, Sedlec u Kutne Hory… After only 23 years of work he designed about 80 buildings (no exact number is known). All his works are within the borders of Bohemian lands. He was wealthy men and owned two houses on Nerudova street, Prague. He died in 1723. His last wish was to be buried at Malostransky cemetery at St Jan v Obore which is the place of today’s Vlasska street. The cemetery was closed in the 18th century. We have no information of Santini’s remains. And up until know, his admirers haven’t had a chance to lay down a flower to his grave. Since December 2015, there is a small place of reverence on 2 Sporkova street, Prague. A memorial plaque hangs on a wall. Below there is a nice pattern – ground plan of the church on Zelena hora.

Special thanks goes to Mrs Lenka Houbova who is the manager of St Jan Nepomucky church on Zelena mountain.