en.infoglobe.cz » Do You Know That? Conquest Of The North Pole II. 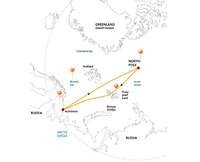 become a popular attraction, and for several weeks after the publication date of this unconventional tour is sold out, despite the exorbitant sum which is forced for an adventurer such modern entertainment spend. Why speak in the singular? Because this trip is possible to implement only three times a year and in late July and August, when the ice is thinnest around the pole, and even climatic conditions of transfer destinations offer interesting possibilities of enjoyment, even in the home port of Murmansk is many things to discover. The travel contract is stated that in case of extreme conditions and thick layers of ice can´t ever dream 90th level to achieve. So you can only hope that the endless ice around you is truly top of that imaginary globe with whom you played like schoolboys. If you're real brave with good condition, there is another way to reach the North Magnetic Pole and almost self: on alpinist skis!

Actually, weekly ski expeditions are although requiring a slightly sportier, but I do not have any concerns about freezing in the icy northern lands. The event is secured from a helicopter, which not only carries all the equipment and unnecessary burden, but also works as a transporter, which skiers take back to the starting base Longyearbyen on Spitsbergen in case of complications. The starting point is the terrestrial polar expeditions Barney base at 89 ° N, from where the helicopter flies over the place to start the march, distant about 18 to 20 km from the Pole itself 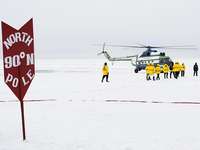 , where in the days move on foot jumping into a desired destination. The following is a celebration of the conquest of the pole, walking path around the world, thus intersecting all meridians and often also the opportunity to call the family by satellite telephone. However, there are various other options to reach the pole and it's up to you what level of comfort and adventure you choose. Investing is always about the same, starting at 450 thousand (CZK). One of the organizers is a Czech explorer Miroslav Jakeš, the first Czech to that pole, which regularly organizes smaller ski trips, and in several performance categories (more on www.miroslav-jakes.cz). After a little excursion we will come back to board of red icebreakers. In previous work we thought some information about icebreaker Yamal, which in today's expeditions, however, slowly replaced by larger and more modern atomic machine 50 Years of Victory. The ship first set sail in 2007 and its comf 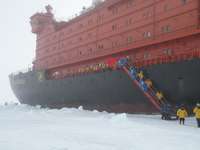 Two weeks long holiday begins by transfer between Prague and Helsinki, where the second day of air continues moving to the port of Murmansk. The third day is already clear a port to gray water exiting the Barents Sea. Ongoing lectures, familiarization with the ship and last but not least, observing how a small pack ice around the boat becomes over time a continuous ice sheet, which passes as an icebreaker but the knife through butter. Such a trip takes about 48 hours. Exactly one week after departure from the homeland, then we are just a few meters from the North Pole. Boat launches bridge and enthusiastic crowds of tourists rolls out. There is celebration, taking pictures, and some daredevils in a special neoprene taps into resurfacing wake behind the boat. Barbecue party, disco and phoning home - nothing special, we're on the pole, and it is necessary to celebrate ... for that money!

8th to 10th day of trip travellers can see the Franz Josef archipelago, consisting of about 190 islands with no permanent settlement, but the excesses of animals, comprising a large group of

polar bears, walruses and polar foxes, not to mention the numerous representatives of arctic birds. 11th to 13 All day has been coming to a close, confined spaces have begun to ship a little bored, as well as the recurrent glacial scenery and very friendly weather. But we are in the north, and thus have no alternative than to fully enjoy everything, even if it be ping pong or volleyball in the bowels of icebreakers ... Sort of looks like an increasingly popular holiday Arctic. Trips to the pole will certainly grow as well as options to achieve it. It remains the question of what type of service you choose and whether the time this kind of tourism won´t be complicated by eco-organizations. For those who do not have half a million, I recommend an expedition to the northern parts of our country, there is also lots of experience and the adrenaline! 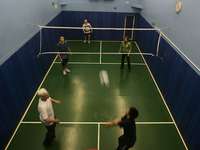 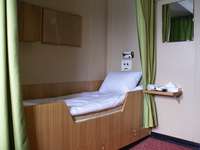 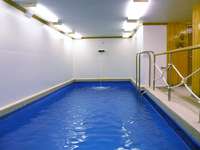 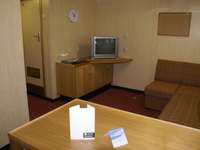