Do You Know That? The Biggest Czech Watterfalls

Published: 24.7.2011
The waterfalls are not to be found only in Scandinavia, you can meet them even in the nature of the Czech Republic. So, let's have a look this time at two most interesting and, no doubt, the highest waterfalls of our country. 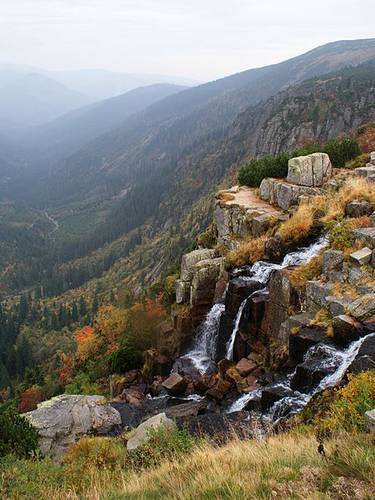 When you say „waterfalls“, everybody would imagine immense water-mass, which fall down, storming, somewhere into the depth of virgin forest (similarly, as it was mentioned in our article regarding Salto Angel Waterfall). Anyway, we have to live within proper limits and concentrate towards smaller, shorter and rather more quiet waterfalls. So, our attention would be drawn to the highest waterfall, situated in the territory of the Czech Republic, but. this time could be rather difficult, as the primacy would be divided among two waterfalls. To tell the truth, the waterfall is not only water-mass falling down without interruption, but falling in cascades, rapids, etc. So, as the highest waterfalls is for long time, and exactly, officially, taken for Pančava Waterfall in Giant Mountains. Its length reaches respectable 148 metres. The waters of Pančava-torrent fall along rocky wall into gigantic Labský důl. The water overcomes the surpass - from 1298 metres into 1150 metres above sea level. It is referred that after heavy rains or during snow thaw at the end of April, its length could reach up to 162 metres!

Just in past, this waterfall became a frequent tourist target, however, the interest fell down. In the middle of 19th century, even a small reservoir with a sluice was created there. The sluice was regularly open, in order to increase the effect of water passage accross. Even a kiosk as well as outlook terrace were available here. However, at the end of 1935, all facilities, including complete hinterland and a basin, were definitely closed.

At present, the access to the waterfall is rather limited, as the complex is placed in close first zone of Giant Mountains National Park (KRNAP). Upper part of the waterfall could be followed from small observation platform, or from near Ambrož Outlook.

Nevertheless, your experience could not be so exceptional. On the other hand, it is worth to visit such monument, within scope of your mountain tour. So, our favoured question comes now, in the second half of our article. This part will be dedicated to less known waterfall but also interesting wonder. Do you know that one of the highest waterfalls could be found in Jeseníky Mountains, inside beautiful Bílá Opava Valley, not far from Bruntál? How you get there? From picturesque spa-locality of Karlova Studánka (here, you can respire the purest air in Central Europe). Small Bílá Opava torrent is winding throughout wild valley, overcoming numerous cascades. Following yellow marked tourist trail, passing directly through its river-bed, you enter into numerous fairytale corners. The path leads you across several foot-bridges, bridges and ladders, reminding a little Slovak Paradise. The whole route is equipped with information tables, describing in detail local fauna, flora as well as the history of Jeseníky Mountains. Cascade system is dominating with Great Waterfall (its height - length - makes 8 meters). Here, the river overcomes, along 40 metres distance, nearly height difference of 20 metres, so, thed final effect would be sufficient, making comaprison to higher waterfall in Giant Mountains. Here, in the neighbourhood of Praděd Mountain, you will be fully satisfied with so big quantity of water!

Published: 13.11.2008
Magnificent Iguacu Waterfalls are located on border of Brasil and Argentina. These waterfalls exceed in its wide famous Victoria Falls, and in its height exceed Niagara Falls. Not far distant from this rapturous nature phenomenon, there is located also megaloman technical work - Itaipu Electric Power Station.

Published: 11.11.2010
Javoříčko Caves consist of three-store system of tunnel corridors and big domes with precipices and chimneys, created by mens of erosive-rusty processes. The caves are situated in Olomouc Region, not far from the Town of Litovel.