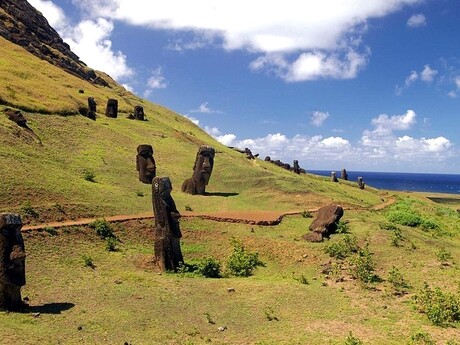 Easter Island is of volcanic origin. It has tringle form, of 16, 18 and 24 kilometres dimensions, and it is located thousands of kilometres distant from any civilization. When first Europeans landed here during Easter 1722, they saw, first of all, stone statues put up along coast, looking at inland. Local inhabitants took very different attitude. Some of them welcomed newcomers friendly and set fires, some behaved distrustfully and collected stones, in order to be defended in case of necessity. When Captain Roggeveen and his Dutchmen crew entered the land, they found, that three races lived here in concord. Some people had their hue of the skin dark, some red and some of them had surprisingly white skin. Some had their ear-laps decorated with special discs, and just these people presented the statues their particular respect. Leaving out of consideration their prone to theft of all subject they had seen, they were very friendly. The thefts let to conflicts with Dutchmen and aborigines, and the soldiers shot down several persons. The discoverers saw very few women, most of inhabitants were hidden in underground caves. So, Dutchmen left an island the next day. 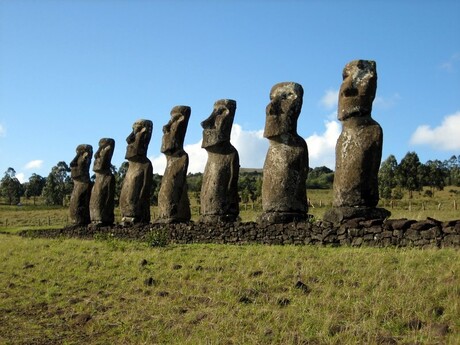 In 1770, Spanish expedition from Peru obtained similar experience. The inhabitants of Easter Island were friendly, and the soil was still cultivated. Anyway, four years later, when Captain Cook landed at the coast, saw completely different situation. The soil was neglected and deserted, people were hostile and demoralized. They took with (as a difference from past times) weapons, wooden cudgels and spears. Big statues were reversed, and it was obvious that nobody prayed to them. In 19th century, the island became a target of slave-hunters. Especially in 1862, local inhabitants very hard suffered  from invasion of slave-merchants of Peru. Afterthat, when this culture was nearly devastated, the Europeans came, in order to study this culture in detail. Christian missionaries tried to bring them over to Christian faith and leave from local Make-Make God. At this experiment, they discovered small God-statues. The people shelted it in their homes. Later, there were found even wooden plates, where even signs of letters were carved on. However, the Europeans destroyed it, as they took it for pagan cult objects, nevertheless, some of them remainded preserved. Thes plates rongo-rongo were written (described) from left to right side, and, in opposite direction, from left to right side. However, it was not succeded to open cipher signs and solve importance of these signs. 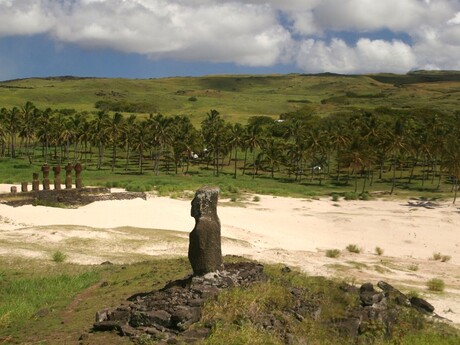 Anyway, most phantastic discovery of Easter Island, there are gigantic statues, named Moai by aborigines. Some of them are four meters or ten metres high. Its height makes even 20 tonnes. Some of them are more bigger and weigh more than 90 tonnes. They have unusually great heads, their chins are pushed and their ears are enlarged, anyway, their legs are missing. Some statues have „hats“ from red stone on their heads. There were discovered even unfinished statues in one quarry. There exist many speculations, how the inhabitants of Easter Island effected the transportation of such statues (people say that the statues came and made their position on places by themselves). 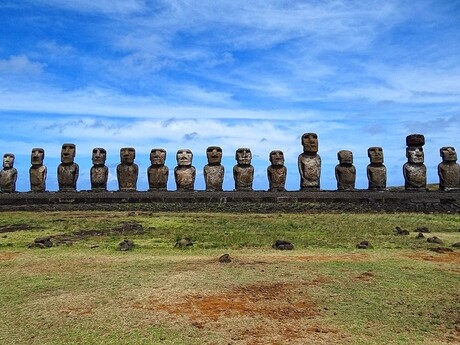 Nevertheless, the scientists found  that the statues have their centre of gravity situated very profoundly. The movement could be reached probably by cooperation of 15 persons by means of long ropes. It is interesting that in Easter Island language exists one word, marking way of movement, enabling slowly shifting, without not using of legs. So, it is no secret, how these statues were created and how the movement was effected. Anyway, there exist plenty of unanswered questions, such as: Why the statues were created? Do they present Gods or predecessors? Why the statues look at inland and not at the coast? However, the statues are silent… 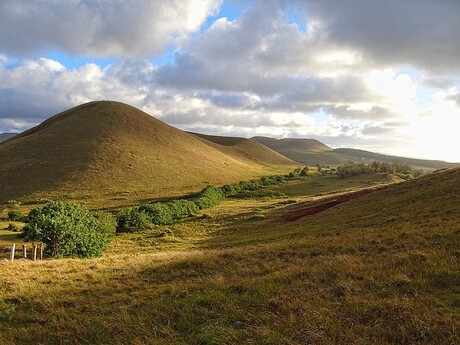