The district town Sabinov is surrounded by beautiful nature therefore wasn´t a problem just go out for a walk somewhere. There are several marked hiking trails, where is no problem to meet a wild forest animals. Just four kilometres from the town you can find the village Drienica, which is known among Slovak but also foreign lovers of winter sports, thanks to the large ski resort. From the foreigners comes there mainly skiers from Poland, from who there is it short trip.

Although that time wasn´t enough of natural snow, skiing of Drienica was fully operational. What nature didn´t do, it was solved by snow makers. But we left snowboards in th

e corner, warmly dressed, took a good hiking boots, caps, gloves and went for a walk in winter landscape. It is true that after the holidays we have a lot of lazy, so we are on the lower parking lot, just below the ski lifts Drienica, arrived by car although we would stroll from the Sabin took just over an hour. The aim of our trip, but wasn´t village Drienica even the buffet in the same ski resort, which we visited on the way back as well, but Lysá mountain (1068 m). On its slopes there is a ski resort Drienica-Lysa, which has its greatest fame probably already behind. Unlike the lower centre Drienica is reliant solely on natural snow, and so at the time of our visit to the slopes instead of skiers were only children on sledges. Few centimetres of snow means enough for them.

From the parking lot, we continued along the main road up to the recreation area Drienica-Lysá.

The path was lined with snow-silvered trees that beautifully complement the breathtaking scenery. After about a mile we passed the station in valley, two-seater chairlift, leading to Lysá. Again, however, did not go. Over the past few years we have seen it in operation really only a few times. It's a shame, it offers a really nice view of the surroundings and had been in operation, they would have after-Christmas trip to Lysá has done a lot more people. But we definitely didn’t suffer from short walk. Serpentine of asphalt road, which was under a layer of icy snow, have really take the car, which scrambled to one of the cottages. But we quite

sharply upward journey passed quickly. We met several families with children, who the road tested as a toboggan run. Around us ran also a group of crazy teenagers, extending behind sleds, bob sleigh and other unidentifiable objects, what should serve to them, as we later discovered, to the same purpose - starting going downhill – as crazy. Just below the summit we walked around the renovated chalet Lysanka, but

that was empty. Only later we learned that it was closed for technical reasons. A few yards above us already welcomed, at first glance not exactly the nicest mountain hotel Sport. With its pleasant atmosphere got us in the past. Also this time the restaurant was full of tourists, who need warm and a cup of tea or mulled wine cheerfully debated. We ran a bit higher to the tourist signpost us to our goal really be considered achieved. It's a pity that we did we did not take with you sled. Icy road descent took us a comparably long as output. Our knees got really confused. We completed the trip in the cafeteria at the lifts Drienica. Outdoor seating unpleasantly surprised us. Why? Judge by yourself :-). 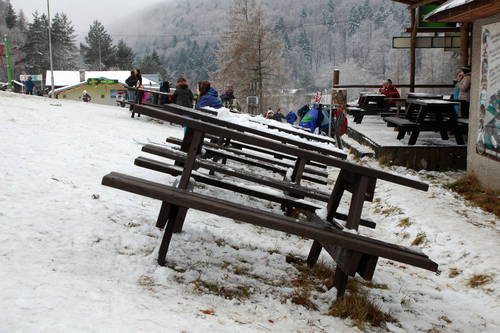