In the morning we had a transfer from your hotel and flight. In our tour of Egypt, we continued to guide Masutem this time, the southern tip of the Sinai Peninsula, specifically in Sharm El Sheikh. From the original Bedouin fishing village has evolved into a modern resort.

And what you can in Sharm El Sheikh?

Everything you want. There are shopping and entertainment centres, bars, shops, cultural centres, the seafront promenade, nightly entertainment, and various monuments. In his spare time, you can try horse or camel riding, visit desert safaris and Bedouin oases, mountain ranges or reddish. This place is a paradise for divers, plus the entire area is characterized by a warm subtropical climate. In some hotels you can log in to the school diving. In addition to underwater activities you can try windsurfing, water skiing, sailing and other water sports. If you go on day trips around the area, do not miss the monastery of Saint Catherine, Mount Moses, and especially boat trips to Ras Mohammed or Titan Island. Overall, this renowned location is ideal for relaxation but also for adventure holidays.

What to do nights?

After the hotel inspection was followed accommodation, lunch, and until dinner then individually all the "snooping" in the hotel complex. In the evening we went to explore the local nightlife. Everywhere were opened - shops, shopping centres, various tea rooms, restaurants, well just everything that lived around us. Everyone wanted to buy something, so we went to the store, which really breathed Egyptian atmosphere. It was a tiny shop with a variety of herbs, mixtures, creams and the like. The bags have sold huge hibiscus, cinnamon, tea for less weight, sleep or good erection, just what you wanted. The salesman was an old Egyptian, who worked as an accomplished shaman. He told us what is in store. He said such a mixture can mix that one need not discuss it more. The walls had a number of antiques. He told us that many people wanted to buy his collection, but he sells. The man would not want to upset. Fearing that my daily instead of cream, blended by a mask, after which the face turns into a monster, so it's not. After shopping, we sat down to tea one where they had water pipes. Sat on the ground, on carpets and danced on the sidewalk young men bounce their Arabic dance. We ordered beer, Coke and some soft fruit mixed drink and it pulled us to the dance floor - or the sidewalk. Our friend was standard and Latin dance at a professional level. She stood up for dancing and the men began to wiggle hips and show something different than they were learning. First, looking at her blankly and then disappeared. After the great fun we came back to the hotel and tired fell into bed. 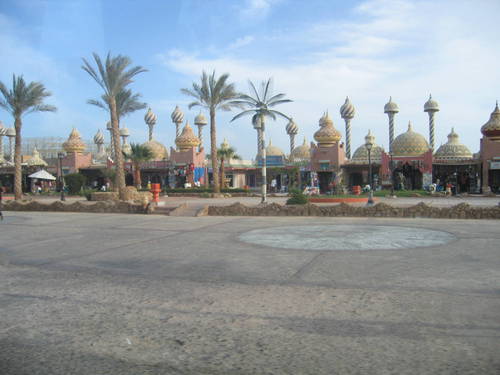 After breakfast a minibus took us to the port of Marina Cairo, where were that many tourists we to rather kept rather together. Who wanted, he could borrow things for diving. Everyone knew about the beauty of the Red Sea, to be sure I took the gear and I, yet not knowing whether to dare into the water. The ship was in addition to our twelve and a few Russians and crew. We, the star of our trip, we rushed to occupy the best places, of course, on the front of the boat. We spread the towels, stripped down to swimsuits and head to the sun. They told us that there are three areas suitable for diving. The boat began to move, jumped on the waves and of course we as well on the front. At first it was quite fun. But only until we didn’t go faster, some of us felt sick. If you do not know how in the course of minutes to empty space on the boat, so I already know ... Plastic bags and slowly ran out about three pale faces and used towels. I tried to lend a helping hand, but it was better to stay without moving. Girls fortunately felt better and even one of them tried diving. Cox on experience with the passengers on the front of the boat, went to another place for quite a normal pace. When staying in second place, I ventured into the water, too.

Tiran, a paradise for divers

If you can, surely visit the island of Tiran, which lies at the Strait of Tiran. The surrounding waters are a paradise for divers. Another reason for visit is the beautiful beaches and underwater landscape beneath them. The bottom of the Gulf of Aqaba falls to a depth of 1800 m. In deeper waters, you have a great chance to meet with sharks or other sea animals.

Among Asian and African continent is the Red Sea, where you can see a number of fabulous coral reefs and marine life. Tourists have the opportunity to admire the wreck of a ship 108 m long Loullia by drunken Russian captain "sit" directly on the reef. Sinai has a triangular shape and is located between the Mediterranean Sea to the north and the Red Sea to the south. The border in the west are the Suez Canal, the east is the Egyptian - Israeli border. The peninsula has an area of ​​61,200 km ² and on the bigger part is desert.

Finally we reached the shore. After returning to the hotel I was still rocking, even in bed, my body was unable to calm down, but the experience of the boat trip was worth all the stomach problems. On Saturday it was off by our imagination. Some went to try the sea, others remained in the pools and still others went to buy the last souvenirs. At night we drove to the airport and waited for our journey home. Egypt is really a place of many surprises. It is a land full of legends and rich history. You will find new, unusual for our fellow citizens, customs, and maybe even try some new dishes. Egypt is definitely worth to see.

Egypt, Luxor: A Trip to Ancient Temples and Tombs

Published: 30.3.2020
Today we will go on one of the most popular trips in Egypt. In just one day we can discover the ancient treasures of Egyptian history. We will look into the famous Valley of the Kings, the Colossi of Memnon, the Temple of Queen Hatshepsut and the temple complex of Karnak.

Published: 9.4.2014
Nuweiba is located right on the Sinai Peninsula by the Bay of Aqaba. It is a hardly noticeable village flooded with sand. Despite its small size, it is a paradise where you will relax and chill out.

Egypt, Cairo: A Trip to the Capital and Pyramides of Giza

Published: 13.4.2020
One of the excursions you can take while in Hurghada is visiting the capital of Cairo, the Egyptian Museum, the Pyramids of Giza and the Sphinx.

Published: 31.5.2012
In the previous article we said a few words about Egypt in general. Today we look a little more on the famous resort of Hurghada. It is the Egyptian city and port on the Red Sea. Originally it was a small fishing village.

Egypt, Part 3: Luxor And The Valley Of The Kings

Published: 7.6.2012
In the previous article, we did a tour of Hurghada. Today we will talk about other interesting places in Egypt and from our guide we learn something about local customs.

Published: 14.6.2012
In the previous article about Egypt, we talked about places such as Luxor, the Valley of the Kings and the Temple of Hatshepsut. This time you can read about the temples in Karnak.

Visitors in Egypt shouldn¨t miss the possibility to visit great cities of Luxor and Karnak, place...

Egypt:  Hurghada - a place for rest

The most favorite tourist destintion in Egypt - Hurghada - lies in area of the Red Sea. It is oft...

Egypt is a favorite site to spend your holiday. Recently tourists from the Czech Republic and Slo...