In the south of country lies the Thuringian Forest, which for mountain lovers represents a green oasis, because it is as perfect for hiking. We went there in the middle of summer, but winter sport lovers love it even cooler months. They can enjoy it the amount desired ski resorts. Marking as the country of poets and thinkers, however, whisper that in our trip won´t only about nice nature, but also about the culture and history. Many of German scholars had lived, studied and worked just in Thuringia.

Erfurt is the capital and in the same time largest city of the Federal Republic of Thuringia. The first mention of the city is from the year 742 under the n 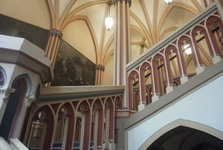 ame of Erphesfurt. During the Second World War Erfurt wasn´t bombed, and therefore today can be proud of well-preserved buildings in the old town. Small streets with old houses breathe thru history. Offers many of cosy cafes, pastry shops and restaurants from which you can already watch the morning coffee around and be in the centre of the action. Right in the middle of the historical centre of the square is the neo-Gothic building Fischmarkt Erfurt Town Hall, which in its present form began to rebuild in 1869. The staircase is lined pictorial cycles from Edward Kaempffer with scenes of Faust and the life of Martin Luther. The decoration of the great ceremonial hall, which is also open to the public, made a history painter Johann Peter Theodor Janssen. In his works has got images of Erfurt´s history.

On the square, there are several notable Renaissance burgher houses. Opossite the Town Hall stands Haus zum Roten Ochsen (Czech: House at the Red Ox), in which is now the showrooms, and on the north side of the square is the Haus zum Breiten Herd (House at Broad furnace) with a richly decorated facade, which is personalized display of five senses. 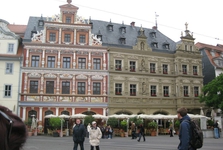 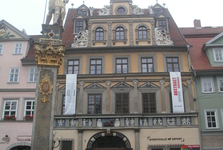 Living on the bridge

Just a few minutes of walk from Fischmarkt separating us from the famous symbol of the city - Merchants - 79 m long stone bridge borne with houses on both sides of which are now small shops with products of artists and craftsmen, antique bookshops and cafes. It's such a charming street full of colourful houses and decorated interpretations. The arched bridge over the river Gera connects Square Benediktsplatz and Wenigemarkt and fulfill an important role especially in the Middle Ages, when it was Erfurt as an important trading city was part of the Via Regia.

The cathedral, churches and monasteries

Another typical feature of the town is the square Erfurter Dom Domplatz. There lead exactly seventy steps, I checked myself. In Erfurt and its surroundings there are numerous other churches and monasteries built mainly in Gothic style. Right next to the cathedral is another, slightly smaller, the Roman Catholic Church Severikirche. At the eastern end of the Krämerbrücke on Wenigemarkt evangelical church Ägidienkirche stands and on the square is Anger Roman Catholic church and monastery. There is also a large shopping centre, a number of smaller shops, but also a huge bookstore. 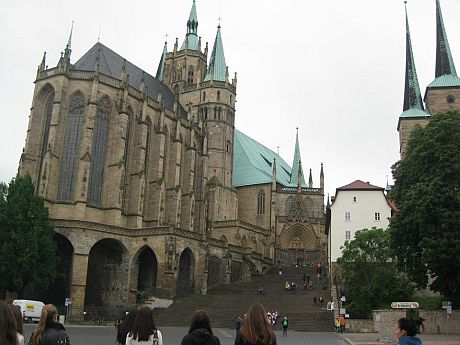 In the historical centre time goes slowly and more relax than usually, rush of tourism stayed behind of gates to capital, it seems. Therefore, if you like enjoying calmly the beauty of the old places, Erfurt will get you, guaranteed.

Published: 6.7.2014
Wernigerode, a German town, is fun to see not only for fans of history, architecture, magical nature and hardcore fans of trains. There is a narrow railroad and also you can take a ride by steam train. The city is also called as “colorful city at Harz " (Die Bunte Stadt am Harz).