We leave in the morning at 7 o'clock. We have about 500 km ahead. Check in is 14 hours. I like to take photos of animals and still "can not" as well. It occurred to me that we could visit a  Zoo in Germany, that was on our way. The choice is clear, Nuremberg wins. Except other things, the local zoo has a dolphinarium.

Initially, there was relatively strong fog. The path along the road to Rozvadov was not entirely pleasant. The traffic was heavy. After necessary filling of gas we purchased Austrian highway stamp and continued to Germany. Finally, the sun was visible. Not long after 10 o’clock we were there. Weather got better, so there was quite long queue at the ticket office. The lady obviously did not manage to do her job. Finally when we got there, we found out that admission for adults costs € 13.50 / person. We bought a map and set off. 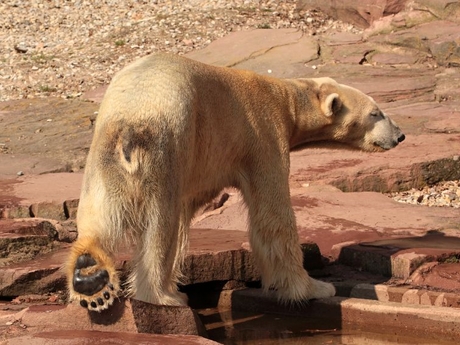 The Zoological Garden was founded in 1912. Allegedly, it is one of the 35 most beautiful Zoos in Europe. There are about 300 species of animals, as I have read in terms of promotional materials. The main attraction is definitely dolphinarium . Another "dolphinarium" in Europe is in Spain. Dolphins are very friendly creatures; look at them always makes me happy. Introduction to the audience is held three times a week. In winter, of course break season begins around March 25th. We arrived earlier, so "no performance".At least, we had the opportunity to enjoy feeding dolphins. For me a wonderful opportunity to take some pictures. 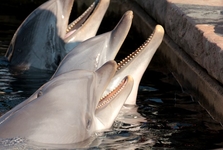 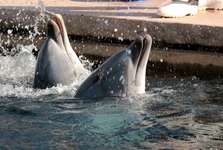 The zoological garden was built in a nice park. Just beyond the entrance, you can enjoy the giraffes and ostriches, there are lots of ponds for wading birds, dolphinarium is also quite close to the entrance. In the zoo, you can watch hippos, reindeer, wild horses, polar bears and black bears, and my favorite felines: lion, tiger, cheetah, lynx snow.

Markings there were, unfortunately, not so great. So we lost a little bit of time and we have to return back to not miss our "main points of interest". Beautiful cheetah was basking in the sun. Eyes half closed without much activity. I try to talk to him, I wish he raised his head slightly turned her around and looked at me. It took a while a while to finally ... Amateur mistake of the photographer - just as the cheetah looked, I could not take the picutre - memory card is full! I just can not prepare photo, so the memory card is full! Before doing things right is after the event, cheetah was happily back in sleep and I got nothing!

Well, what you can do… So we went lions’ paddock and especially look forward to see the tiger - my favorite. Felines properly enjoyed beautiful weather, so the lion and lioness was openly rolled out the middle-range and totally unresponsive to interest tourists. Tiger did not disappoint, however, passes around us and sometimes powerfully roars. Finally, success and a wonderful experience.

It is time to proceed to the place of accommodation, which is a very nice hotel Fürstenhof in the town Holz. But about this we will talk in the second part of the article.