Hotel is perfectly located, both for the summer and winter season. In winter it is a ski area Reutte , and in summer there are great opportunities to visit the magnificent castles around.

There are castles, built by Ludwig II. He was called the fairy king. The first castle, Neuschwanstein , is one of the most beautiful! The castle was the first of three, the construction of which began in 1869. It has been never fully completed. Outside the castle is magical, literally. The interior is no less spectacular - silk, brocade, lapis lazuli, ceramics, gold, porcelain, beautiful coffered ceilings, carved and inlaid wood – really wonderful experience! This fairytale castle probably inspired Walt Disney in the creation of his cartoons. 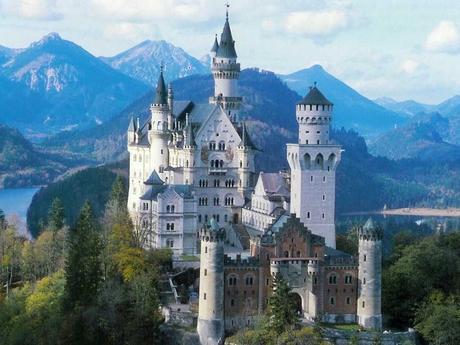 The castle is open all year round. When we were there we even have met

staff speaking Czech. The second magnificent castle, which is really just a short walk from the first one, is Linderhof castle . It was designed as a royal villa, but the appearance is very similar to Versailles. Louis II very loved Versailles and wanted to "build his own". The castle has a square base and from all sides "is the same." The Baroque interior is fascinating, full of gold and bright blue, which was the king's favorite color. Motifs that are repeated constantly represent his favorite animals, swans and peacocks. Around the castle there are small structures, the realization of which meant fulfilling king’s fantasy - Moorish pavilion, a Moroccan house, hunting lodge and Venus cave with a blue cave. The castle’s surrounding is also completed by beautiful gardens and fountains system. All of it are real gems. Here I should probably mention the third castle, which is little bit further from the hotel, it's Herrenchiemsee castle - is really fabulous. I only recommend visiting it. But now we continue towards our goal:

A Czech speaking personnel welcomed us in the hotel. Soon we had learned that the owner is a Czech. The hotel has 4 floors. The accommodation there is really nice, spacious with spectacular views of the surrounding mountains. Not far away (about 300 m) is a cable car that takes you to the highest mountain in the area Hahnenkamm . There are two routes - cabins, pointing to the panoramic restaurant, about in the middle of the route there are intermediate stops where tourists wanting to ski may trasnfer and continue to the top. Or stay in the booth and get off at the restaurant where great views of the greats. Due to the fact that we went without skis, just rto elax, we used a cable car, a return ticket for EUR 5, - per person.

In the area there are also many opportunities for swimming. Right in the town of Reutte, about 15 minutes from the hotel, they opened thermal spa Alpen Therme . In town Schwangau, which is near Neuschwanstein castle, the Royal Spa Kristalltherme-Schwangau of these baths can watch the fairytale castle from any point. In summer it is a wonderful opportunity to swim in the vast and beautiful lake Plansee in crystal clear water. 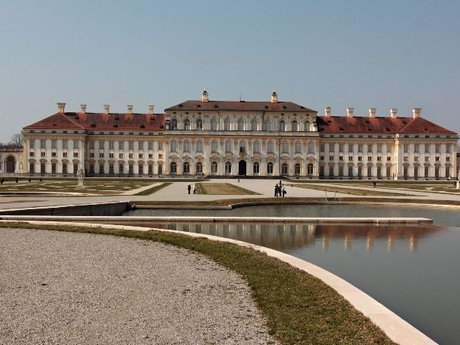 For the way back we chose the route via Munich, with a stop atSchleissheim castle. The castle is about 20 kilometers from Munich.It is a magnificent baroque complex, which consists of two palaces and beautiful gardens in the French style. The first is known as the Old Palace, the equipment is not spectacular, unfortunately, was largely destroyed during the Second World War. Second - New Castle was built around 1848 and its sumptuously furnished managed to largely maintain. The castle is a baroque gallery (Barockgalerie), which contains the most important collection of Baroque paintings inGermany. The palace can be viewed separately without a guide. The gardens are beautiful fountains that add even more charm to the whole space.