We headed to the Baltic Sea, northeast of Germany, to the largest city of Mecklenburg-Western Pomerania (Mäkelborg-Vorpommern) - the former Hanseatic city of Rostock. 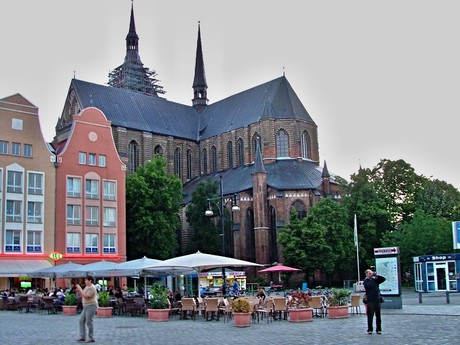 This major port city is protected by a bay into which the Warnow River flows. The location of the city influenced its name (in translation: the division of the river) at the time of its founding by the Baltic Slavic tribes (6th century). Subsequently, the city resisted the attacks of the Vikings, but ultimately succumbed to the Danish king Valdemar I the Great (12th century). German merchants settled in this area, who founded three cities here, which in 1218 merged under the name of Rostock. Rapid development recorded entry into the Hansa Association (1251) and soon became a major business center and important port. Over time, Rostock did not avoid the horrors of the Second World War when the historic part of the city was destroyed after the bombing. After the division of Germany, the city became the largest East German port and in 1960 its historic center was restored. 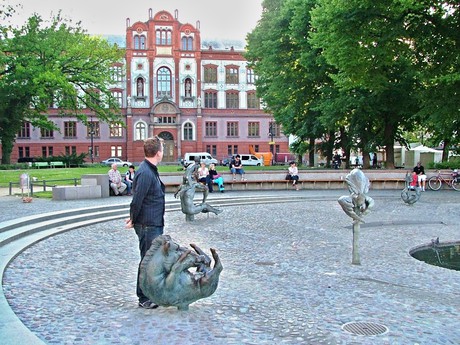 Rostock is also the center of education. The Poor University in 1419 is one of the oldest and largest universities in the Baltics. We are touring the city at its main building at the Universitätsplatz. In the center of the square near the small park is the interesting fountain Brunnen der Lebensfreude (Joachim (Jo) Jastram and Reinhard Dietrich, 1980). The fountain of joy of life with bronze sculptures of people, animals and birds is a popular meeting place. The fountain did not avoid criticism because of the naked figures. So do not be surprised that local residents still call it a porn fountain.

Walking along Kröpeliner Straße, we pass burgher houses, a number of shops, pubs and restaurants with fresh fish specialties brought in from the nearby harbor in the morning. Even detours to side alleys will make your walks more interesting. There you will see some examples of typical Hanseatic architecture and medieval red brick churches.

After Kröpeliner Straße, you can reach Neuer Markt in just a few minutes if you do not enjoy some of the restaurants. The square is dominated by the town hall - Rathaus (1270), which in the past served as a store. In the 18th century the Gothic town hall with seven towers was complemented by a Baroque facade. 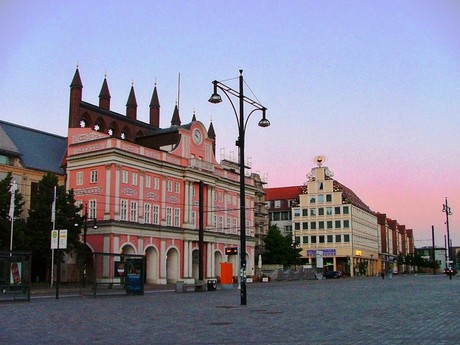 At Neuer Markt - the New Market - the city bourgeois resided. They built themselves

magnificent houses. These were rebuilt in the 18th and 20th century in the Baroque and Classicist style. During the Second World War a part of them was irreparably destroyed, especially the northern side of the square. On the southern side they built a post office with arcades and stylized shields. The western side was preserved from the former structure. It features also beautiful faades of former Hanseatic houses.

In the center of the square there stands a simple and inconspicuous Möwenbrunnen fountain (Waldemar Otto, 2001). It consists of a central pillar on which a seagull that overseres four bronze figures representing water gods (Triton, Nereus, Neptune and Protheus).

From the square we go over the corner to the parish-Lutheran-Marienkirche parish church. The Brick Church of the Virgin Mary is an important work of the North German Gothic. The first reference of the church in this locality dates back to 1232, in its present form it was completed in 1454. The dominant tower of the temple was finished in the 18th century. The temple is the largest of the three city churches, and you can find many interesting elements in the interior, such as the astronomical clock with the rotation of the Apostles (1472). 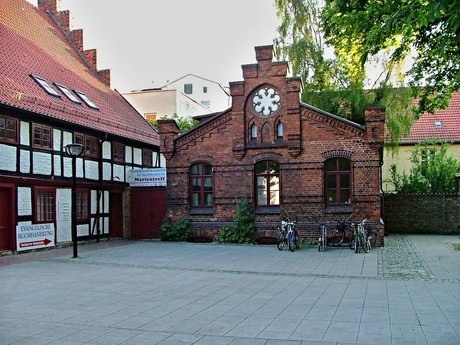 Before entering Marienkirche from the southern side is a small square of Ziegenmarkt - with a small fountain in the shape of a bronze goat (Gerhard Rommel, 1979). It refers to the history of this place because it once traded with these animals. In the immediate vicinity is one of the most precious monuments in Rostock - Altes Kantorat (13th century). It still preserves his Gothic and Renaissance form. To the left is the old mint - Alte Münze (1500) with a Renaissance portal, a grif and a heraldic animal of the Hanseatic City above the entrance. The coins were minted in Rostock until 1864. 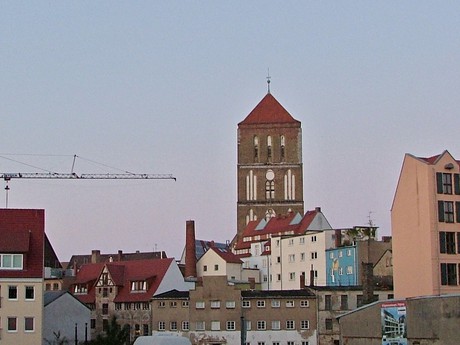 After another church, we have to go to Alten Markt. Gothic brick church of St. Peter - Petrikirche (14th century) dominates the city with its 117-meter-high, narrow tower. To get to its top you can either take a lift or climb 195 stairs. The tower is currently being used as a lookout tower where you can enjoy a beautiful view of Rostock and the Baltic Sea from a height of 44 meters.

Just a few minutes' walk on Altschmiedestraße, you will reach the church of St. Nicholas - Nikolaikirche (1230), from which today the cultural center is used for concerts.

The fourth city temple, consecrated to St. Jakub - Jakobikirche, was heavily damaged during the Second World War and subsequently destroyed. 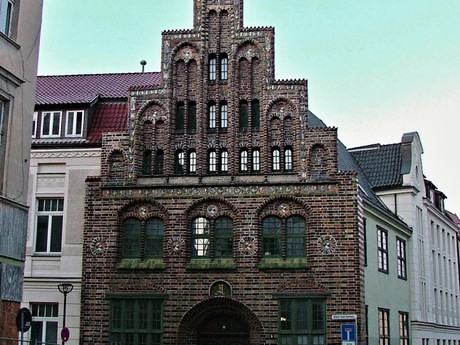 We finish the day at one of the most famous and beautiful houses in Rostock. The Kerkhoffhaus is located on Hinter dem Rathaus 5 street, close to Neuer Markt Square. This house was built by the mayor of the city and its decoration testifies to the wealth of his family. The shield of the house is fascinating thanks to its facade consisting of glazed tiles with warrior heads. In 1902-1907 the house was rebuilt and serves as a municipal archive.

Rostock is known mainly as a port city, so here we come again.