Kurhaus where you want to stop for a while. Maybe even

to sit down and watch fountains and people passing by. When you have enough of watching it is tim to see the historical center.

We recommend you to go into narrow and cozy streets and head to the second most important architectonic sight of this spa city. It is the Marktkirche church. It is really close to Kurhaus. You just cross Wilhelmstrasse and continue, for instance, along Karl-Glässing Strasse.

Then you will find yourself on an impressive paved square. To your left should be the aforementioned monumental brick cathedral and not less impressive building of the Wiesbaden townhall.

But lets get back to Marktkirche. As you can see on the pictures, the cathedral is pretty new. Well, at least compared to the age of gothic cathedrals of the 12th or 13th centuries. Marktkirche was built in 1862. Its construction took nine years. It was built to replace the original St Mauricius church that burned in flames of the fire of 1850.

Once you finish enjoying the work of Carl Boos, the architect of the church, go inside. There is a very valuable musica instrument – Wackler’s Organ. It has been functioning to the present.

Adjacent town hall, i.e. new town hall, was built in a very short period of time as well. It took only three years to erect this building. Except its administrative offices of local municipal government, there is also a very good restaurant. 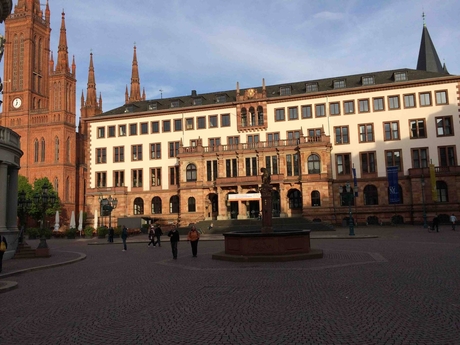 Before you set off to see another streets that will uncover another sights of Wiesbaden such as the holocaust memorial , spend a while at Schlossplatz. Try some of local ice cream with tons of fruits. 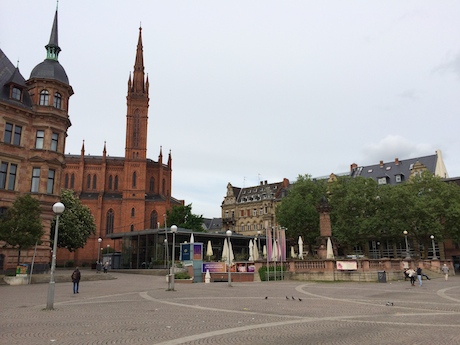 Maybe that while wandering around the historical core you will encounter some local musicians playing merry songs. Or you will hear people talking in wonderful coffee bars that are numerous in this spa town. Enjoy the peace of historical center, sit down for a while on some bench and observe shop windows.

When you find yourself thirsty after long walks, remember that you can try local mineral water. Hopefully, you will be luckier than we were for we found only closed springs… 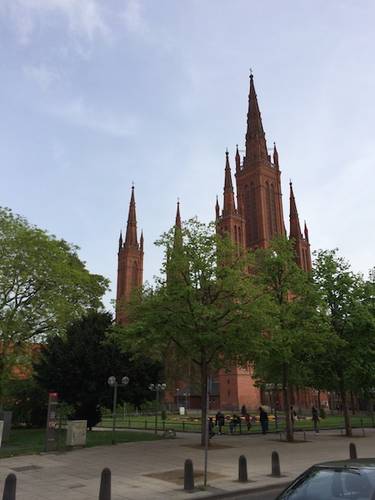