Published: 30.6.2008
One of most attractive parts of Swiss Alps is situated in Goms valley which is ideal for all arts of summer activities. In hot summer days you can make an excursion to a glacier or climb to one of mountains of 4000 m high. Immagine, in Wallis Canton there are 47 mountains of such altitude!

Goms Valley is 1000 kms distant from Czech Republic. Anyway, it is worth to make an excursion here, as local countryside became a home of popular cattle-breeding of Milka-rose cows.

Who would like to watch this beauty from another perspective, there is a possibility of raft-descending of upper flow of Rhona river or to try different non-traditional excursion. You can observe the surrounding world from horse - or lama-back!

Wallis Canton is placed in southern part of Switzerland. Its border is formed as follows: from south by Italy, from southwest by France. We note that this place chose the best

of natural beauties from its neighbours. Except French, you have no problem to come to an understanding with German (this language is an official language here). The centre of whole area became Rhona-river, which cut sharply glaciers´ way at that time period through mountain giants of  Bern - and Wallis Alps. Its dominanta - Dufourspitze (4634 m) is the highest peak of Switzerland at the same time, and the second highest peak in Europe. Anyway, we cannot omit the most popular Alps-motive - Matterhorn 4478 m („Dragon Tooth“). Despite its average altitude (it is the seventh highest Alps mountain) this rapturous mountain got more well-wishers, in comparison with with other big peaks around. Who would like to climb this mountain, would be probably disappointed, as climbing possibilities, owing to excursions-securities, are rather

Provided you decide for less difficult mountain tourist excursion, so there are more than 700 official routes available, including two most known, such as: Gommer Hohnweg and Rottenweg. These routes connect nearly all small towns and villages of this region. Cyclists choose from many paths, suitable for use of families with children.

One of local best places of interest, there is a longest and greatest glacier in Europe. The massif of ice is extended in a space of 84 km² Its name is Aletschgletscher. This giant of 27 billions of tonns of weight, takes, according to estimate 4% of all drinking water of Europe. From this reason, it was written in UNESCO World Heritage Survey in 2001. Most beautiful views on all this scenery are to be offered from top of Eiggishorn, which is accessible by means of rope-railway, and it is worth to visit, for sure!

Now, we take a rest from nature beauties. This fact will be valued by families with children. The way with historic train on mountain railway of Furka or between towns of Gletsach and Repl in Uri Canton will be

To golf-lovers there is to be recommended an excellent resort with nine holes of Source du Rhone in small town of Oberhestlen.

Anyway, most attention is to be given to Matterhorn. In its shadow, there is placed town of Zermatt, centre of all area. This unique place we are about to visit in our next article regarding active way of holidays in Switzerland. 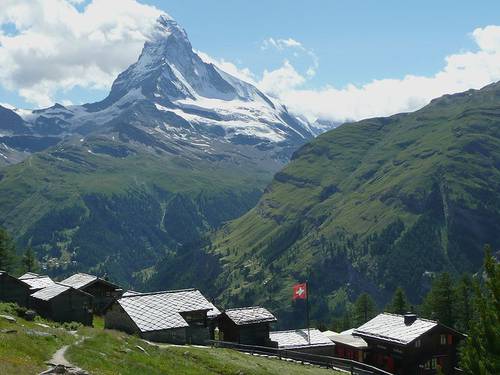