Published: 14.5.2009
We mentioned recently inique natural locality of Slovak Paradise in our article. Now, we take aim at its most interesting parts and try to describe where they are placed and how to arrive there. 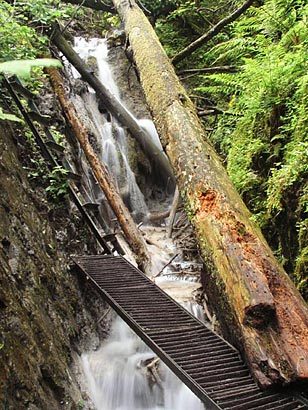 mounting directly into Hornád river. This place was known in past, for public it was open here since 1960. Anyway, first step for abyss - access was made with building of rope-tree-bridge at Kláštorská abyss, within a range of ?Prielom Hornádu? (Hornád Gap) access stage. Waterfalls´ order at mountain-abyss upstairs: Discoverers´ Waterfall, Anton Straka Waterfall, (it is an author of tourist guide of East Slovakia of 1921, describing also Slovak Paradise), Rainbow Waterfall, Gustav Nedobrý Cascades (it is populat tourist clerk), Small Waterfall, Carthusian Monk Waterfall, Machový Waterfall.

Hornád Gap is approximately 16 kms long section of upper part of Hornád river (from mouth of Velká Bielá Voda to Smižany). Hornád river created here canyon-valley, the banks of which fall from lateral ridges and peaks with more than 300 m of height difference. Thanks its tourist history, Hornád Gap has its special position among natrue values of Slovak Paradise. Hornád-predecessor (at the end of younger Tertiary formation) flew along plain bottom of today´s Hornád 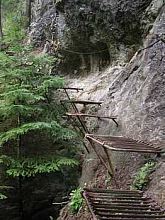 Basin about approx. 150 m higher. Later, the area of Slovak Paradise, began to raise, whereas the area of Hornád Basin started to sunk. Hornád river cut into layer of its flow, so it was created not only this bottom, but also its following tributaries (Lesnica, Velká Biela Voda, Biely potok), including smaller brooks and cascades, trickeling down from slopes of Glac plain. First crossing of Hornád Gap along its frozen level was effected in February 1996. On the contrary, in July 1906 descended B. Hajtsch and L. Hajtsch on primitive raft, Hornád river from Hrabušice (Hornád Neck) down to Smižany (Hornád mouth at Smižanská Maša). Hornád Gap was not passable along its whole length. Even in 1960, there was started the construction of rope-bridge near to Kláštorisko Abyss, and, consequently in 1974, there was terminated the stage construction of ?Mountain Service Path?. Along this path, you find 7 metal bridges and foot-bridges, 320 m of chains, 140 grades and approx. 70 m of wooden-bridges.

This abyss is situated at the eastern edge of Glac plain, between Pirc and Čertova siho´t ranges. It is approx. 1,5 kms lon 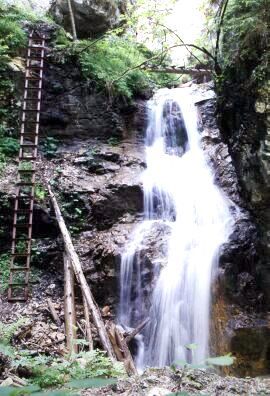 g , its declivity is 180 m approx. At cross-roads in Kysel, it is dividing into Velký (Great), Malý (Small) and Vyšný (High ) Kysel. From tourist point of view, it is interesting the story abour abyss discovery. Despite the fact that Kysel was situated quite near to former tourist centre - town of Spišská Nová Ves - it tool a lot of years when the pioneers reached complete passage. On 27th June 1900, there was effected the first dicovery-tour but the whole abyss to go throw was succeeded to Kazimir Kozlovsky and his friends on 25th August 1907 only. In 1925, the workers of railway-depot of Spišská Nová Ves, placed in abyss first metal bridges and ladders. In 1975, members of Mountain Service made accessible the section at Great Waterfall (this section was not passable till that time). Within 16th and 17th July 1976, there broke out a big fire at abyss-mouth of Biely potok (White Brook), which consequently hit left part of Kysel bank.  (Pirco slope). The fire hit more than 30 ha of forest. However, now, the passage through abyss is forbidden (till revocation), owing to exceptional danger of stones and burned trees fall. The ladders were removed - from security reasons - and a substitutional route is accessible now, leading through non-damaged section, Small and Great Kysel.

Access: to Kysel valley there is allowed an access on marked routes only - from Spišská Nová Ves and Dedinky.

Rock gallery on southern slope of Ludmanky, with a view to Hornád Gap, White Brook Valley, Čertova siho´t , as on High Tatra. Under rocky terrace, near to tourist path, you find a cave ?Michael´s Hole?. The wall of Tomášovský View was conquested on 8th October 1938 by A. Brnčal, A. Huba and E.Leschinsky for the first time. Tomášovský View is a standard place of mountneering´s training and rock-climbing competitions.

White Brook is right-part tributary of Hornád-river. Its source is placed in an altitude of 900 m

approx., on northern slopes of Geravy, bordered with Holý kameń (Plain Stone), Červená skala (Red Rock) and Suchý vrch (Dry Hill) from northern part. On its upper flow, (its name is Tomášovská Belá), is situated river basin Klauzy. Its waters kept here, served for wood ?descent to Smižany, in past. The brooks, mounting to White Brook, form abysses Kysel and Eagle´s Valley. In Trias limestones, through which flows White brook, especially on its middle and lower flow, there were created shorter canyon sections. On left-part slopes, in eastern rocky slopes of Glac plain steeps, you find spaces of Bear Cave and Golden Holes. An essential part of White Brook Valley, forms a part of Kysel State Nature Reservation.

Access: on foot to White Brook Valley only on marked routes from communities of Spišská Nová Ves and Dedinky.

It is one of most romantique abyssses of Slovak paradise. The water flowing through, springs 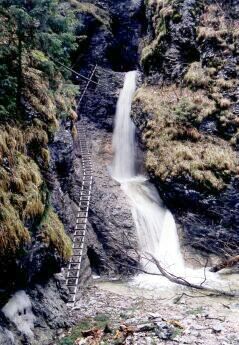 on northern edge of Glac plain. Its flow divides a massif of Ptačí hrb (Birds´ Hump) and Rumanová. Its mouth to Velká Bielá voda is direct in holiday centre of Podlesok. History of tourist discovery of Suchá Belá  begun in 1900, when a group of M. Roth reached Misovy (Bowl Waterfalls). In 1908, they marked and arranged tourist trail. In March 1910, the group of A. Mervay crossed the abyss in winter for the first time. Anyway, completely was the abyss opened for public (including Bowl Waterfalls) with care of Mountain Service, in 1957. Waterfalls  in row of walks: Bowl Waterfalls, Abyss of Bowl Waterfalls, Abyss, Window Waterfall, Bed-Waterfall, Lateral Waterfall, Cascade.

Published: 17.9.2010
Active Holiday II. As mentioned in our first chapter of our journey, camping place Podlesok could be an ideal starting point for visits of most impressive valleys, such as Suchá Belá or Piecky, or 6 kms distant Velký Sokol Valley.