We have spent one unforgettable weekend in Rotterdam. We chose bus as our mean of transport; however, it wasn’t the best choice despite it was the cheapest. On the other hand, it was not comfortable at all so it wasn’t worth of few saved crowns. In the afternoons, we departed from Bratislava to Brno, we changed bus and headed straight to Rotterdam. First unpleasant surprise was when we were changing busses. Somebody stole part of our luggage. Until the present, we are not sure if this happened already in Bratislava or in Brno before we got off the bus. Anyway, we had one piece of luggage less. Meanwhile, we almost missed our second bus while we were filling forms with our first driver. Fortunately, our travel insurance was really good so we were almost sufficiently refunded back in Slovakia. But it still it got on our nerves. The way from Brno was relatively calm, we traveled unbelievable 19 hours. Luckily, stolen luggage and uncomfortable seats were the only negatives of this great weekend

In the morning, our friend who hosted us had been waiting for us at the train station. As soon as we got there our brilliant weekend began. First, we will tell you some basic facts on Rotterdam.

Rotterdam is located at the shores of the North Sea and it is the second largest city of Holland. There live about 600 thousand people and there is also Europe’s largest port known as "A Gate to Europe ". For a long time it had been the busiest port in the world but recently the Shanghai port replaced it. For our visit of Rotterdam was a visit of our friend in the first place, we adjusted our sightseeing plan to this. We didn’t try to see every interesting sight and landmark in this city during these two days. First, we just walked about the city and talked until it was very late. We also enjoyed fantastic peaceful atmosphere in the city. One of the best experiences was a cruise. We had seen not only magnificent architecture of the city but we had seen the harbor itself as well. Despite Rotterdam’s position as the most important industrial center in Holland one would be surprised how much greenery there is. The most popular and most ecological means of transport are bikes. People ride it to their works, to pubs or just to visit friends. It gave me impression that they were just born on bike. Even roads were adjusted to fit bikes 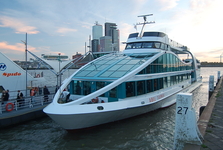 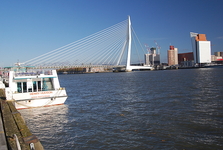 Euromast – a city as a model
As majority of tourists, even we didn’t miss the 185 meters high Euromast. Weather was great so we had a perfect view over the city.. 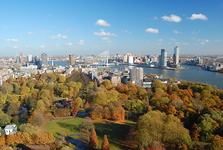 Other interesting htings in the city 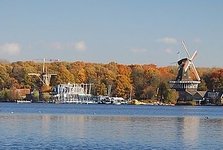 We had no specific goal so we encountered many interesting things such as fabulous modern architecture, beautiful parks or enchanting wind mills so typical for Holland. Among other interesting attractions was, for instance, a complex of cubic buildings standing on their edges, Kubushuizen (you can see them on photos). One of them is unpopulated and opened for the public. However, there are many other things in the city. There are many museums, galleries, and, of course, restaurants and pubs you should not only admire but also visit. Rotterdam is also beautiful and clean city that you just have to see in your own eyes. Photos of our autumn walks you can see HERE. 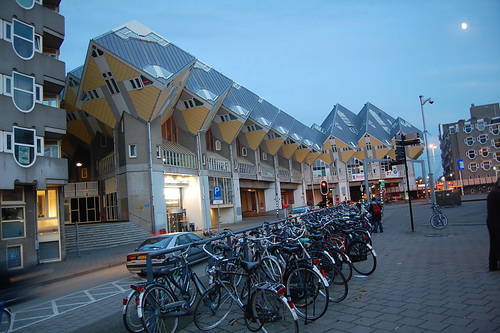 China - By Journalists Eye XXII: Shanghai - Queen Or A Whore?

Published: 13.10.2012
We are in Shanghai, in a metropolis shrouded by hundreds of "firsts" that is, in the largest Chinese city. One "the best" there certainly lacks – the historic one. Shanghai, unlike many other Chinese cities has relatively short history, after the Middle Ages, you won´t find any foot mark.