en.infoglobe.cz » Indonesia I: Expedition 2011 - Journey To The Land Of Islands

Members of our expedition:

Janka: "When you undress a swimsuit, I´ll jump to swimming pool, as well."

Day One - Departure from Vienna

On Monday 2nd of May 2011 at 16:00 we flew from Vienna to Doha. There we waited four hours and we went to Jakarta. We arrived in the evening, time was shifted about 5 hours. At the airport Idong awaited us. We stayed at the Hotel Santika. 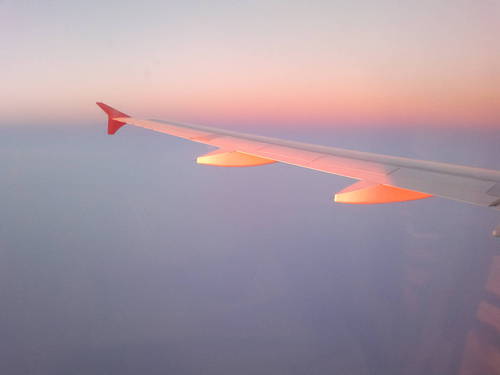 In Doha where we changed we already weren´t the happiest ones. But even not the saddest, we milled the sober air-conditioned lobby, and we left happily. And we flew infinitely long, we passed through the equator - the plane slightly hrklo as fuel in the tanks began to shoot on the contrary, as this is the southern hemisphere must. We also passed through over the remains of Sumatra and probably the most famous nineteenth century the volcano - Krakatoa and landed in Jakarta. At the airport waiting for us, for our nice surprise, exactly as he should - our first guide - Idong. Later it turned out as a rule, all our guides are accurate, reliable, helpful, friendly and nice. Like everyone else around.

Idong took us back to the hotel. We got in the air-conditioned minibus, which was in excellent condition and we went to the streets of the city. "How long does driver's license with you?" Idong asked us, when he could see our dewy forehead and eyes full of terror, which we deny to us the absolute chaos for local transport. "Here it takes four hours." Later we learned that even more is needed. At first glance, absolute chaos, in which one thousand scooters weaving between cars latest brands, and about life and death decisions centimetres are actually managed simply enough a few rules that are generally respected:

1.       People drive on the left side - indeed, drove left, dare to go in the opposite direction would have been a suicide attempt, sometimes some of it scooter attempted, but such attempts have been truly exceptional.

2.       Traffic lights - red, orange, green - this rule was well respected, though not strict red feet, it is rather seen as a switch of way. Cars stop at a red exactly the moment you depart from the car side street, without unnecessary pauses followed the stream of cars and scooters in front of them.

3.       TUT - short blast means that I am between cars and scooters in front of him he saw a space and go into it. Who makes the first tut, it has the right space, the other's respect.

4.       TUTU - two consecutive short blasts mean, that warn people that exist that I'm here. To me, therefore nobody Necpal front of the car, maybe I can´t see. When do Tutu, it means that no one should do TUT, there is no place, even though it may seem.

6.       Whistle - by boldly stepping out into the road and a man with a whistle or a target, with flashing LEDs. Vigorously whistle, waves target, the car stops on the main road and the road can get away vehicle, or other parking area. Whistle has a higher priority than the TUT or Tutu, is universally respected.

7.       Endanger anyone - it's about basic rule may be stated in the first place. It works much like here on the ski slopes, you must not threaten anyone before him on the back so do not worry, that's the problem of those who come behind you. These rules just four hours and you really can learn. Traffic signs as we know in our country, might use, but I give the brand such as right of way before. Who has priority to either clear the situation, or is it due to a kind of customary law. Nobody has a problem with that. 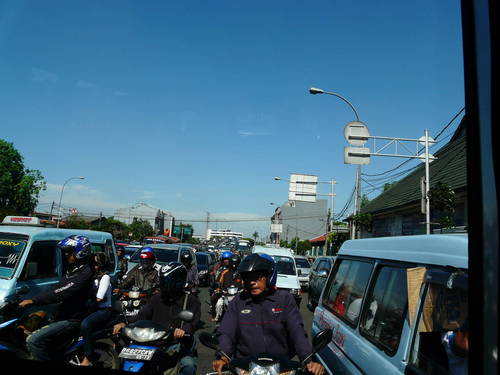 A necessary condition for the functioning of such a transport system, where in addition is constantly arising and passing away more traffic lanes, but the mentality of drivers. I solved the most difficult situations with calm and cool. The absolute principle is not to jeopardize anyone and that they should be upset or even furious blow, it's not even think. Anger, like ignorance and desire is here regarded as a disease of the mind. The second and equally important condition is of course natural talent Indonesians for driving.

Maybe a billion people live broadcasts monitored Formula 1. It abounds with boredom, start from pole position after the target. I do not know how many people will watch Idonga1 ride on a scooter from Suzuki after target launch in Jakarta. No pole position, but the constant overtaking, search little hole then TUT, stepping on the gas, about 3 cm to 4.5 cm left and the right side to avoid the minibus and off road is before them. Do not hesitate, as he returns, he will hook right TÚT, add, brakes, and maybe still has to be careful when doing so lost a son and wife, what with him sitting on the scooter as well. Sometimes it still holds the right hand under his arm and a box of mobile phones. It's a different adrenaline as F1, with the right business plan would on scooters in Jakarta with the cameras on his helmet gave to earn millions.

In this style of driving everyone around assumes that everything does not always succeed, and the cars have to be battered, rusty and dirty. But they are not. Cars are new, clean, without scratches. And they are big enough, no mini cars. When we found out, that the Idong has ten brothers and sisters, we understood why.

After about half an hour away in the chaos we have happily got into the Santika hotel, we stayed and we went to the pool, rejuvenate our bodies inside and out. Externally by water from the swimming pool, expensive beer inside un-Christian. We could not complain, in a Muslim country must be un-Christian beer expensive. Finally us across the road not too discouraged. After the first round of the waiter brought us a premium for the number of beers consumed by one and brought another red cap with the inscription Wed Nicolas, which was a brand of beer that we drank so with gusto. Baseball caps with the next stay very fit.

"When you undress a swimsuit, so I jump into that pool,  as well," she said Janka. So I pulled swimsuit and jumped into the pool. Janka as well. And without swimsuit. But in her underwear, so it was not much of a miracle. In addition, Jakub ran to me with my swimsuit: "Come, Allah sees you!" It flashed through my head as the whip in front of me within the meaning of sharia, so I quickly pulled swimsuit again. But that cruel punishment threatened me, Islam in Indonesia has elements of previous religions and is extremely tolerant. Idong said that professes Islam 80% of the population, half of them strictly formal and orthodox in others only 10%. From the total number is only 4%. A negligible number. But as I think so, in number of 12 million of Jakartan is not so negligible, it is exactly 48,000 Orthodox. Enough to make me whipped in front of more than enough. So, do not download rather swimsuit in the pool.