From this reason, famous cities, such as: Paris, London or Prague belong to most admired towns of the world. No doubt, the same rule is valid for Dublin in Ireland.

A Bridge with Half-Penny in its  Escutcheon

The Liffey-river in Dublin has several importances at the same time. The city is divided with the river into its left and right banks. Whereas in past,  poor people always lived along left banks, the right banks are busy even at present. You can find there one of most famous places of night festivities of Europe, including very popular Temple Bar. So, in 1816, the first bridge, made from metal, Ha´penny Bridge - was constructed over Liffey-river. Its original name was Liffey Bridge but this is not right marking at all. Its nickname as well as regular mark was originated in a fact  that the passengers who intended to pass from one part to another one, were forced to pay for half-penny coin fee. Poor people were unable to pay, as they missed the respective money, so they remained to stay in one part only. Fifteen years ago, you had the possibility to buy on Ha´penny Bridge anything which made Dublin famous, i.e. pictures of the city, photos, Irish whistles or tympanums. However, at present, nothing is available there, only the beggars shrivel at white balustrades, asking for some small change. Apart of this, Ha´penny Bridge forms evident town´s dominanta. To tell the truth, the bridge is missing such dignity and stone beauty, as it is in case of Charles Bridge in Prague, you are recommended to cross it to the opposite part, and several times, for sure. After all, tired tourist could be able to overcome one way to opposite bank within 20 seconds! So, it would be easy to do it several times. This bridge is full of the atmosphere of past and present Dublin at the same time. And this would be a pity, not to enjoy it.

The Irish metropolis has more bridges available, of course. Inside the area of so called Greater Dublin, there are 24 bridges, including one railway bridge and another one which has no name. The newest bridge is those of supermodern Samuel Beckett Bridge. The named was dedicated to famous Irish writer and dramatist, one of most known and famous representant of absurd theatre. The points on both parts (sections) of the bridge are arising to the sky, asking for passers-by, to take notice of them and stare at dumb stupefaction.You cannot believe that such ancient and rather shabby Dublin could accept  into its arms, as a result of its pertinacious struggle for freedom, something modern and of white colour shade, reminding sea-gull´s feathers. This is good idea, for sure! 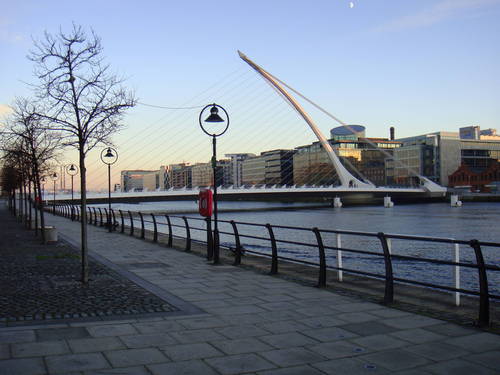 The Artists and Patriots

Dublin bridges accept with pleasure the names of famous figures from Irish history. So, in 2003, James Joyce Bridge, suggested by Mr. Santiago Calatrava, Spanish architect, was open for public. This bridge reminds, with its roundish forms as well as transparent facility, the world of famous Irish writer. He was put down for ever into exercise books with his eternal disturbance and desire to put such questions which the other persons left without any remark. Apart of this, you can find there numerous bridges, named according to national patriots and fighters for freedom and independence of this emerald island, from submission on Great Britain, such as: O´Donovan Rosa Bridge (member of Irish Republic Brotherhood), Liam Mellows Bridge (General of Irish Republic Army, sentenced to death during civil war) or Sean Heuston Bridge (a leader of 20 Irish volunteers, who defended - during Easter Uprising in Dublin - on their place against immense superiority of British soldiers during two days, despite the fact that they would, according to the expectation, to persist for four hours only). Heuston was, for his courage, executed  by British troops, when the uprising in 1916 was defeated, in the age of 25 years. But these are details, in order to be remembered. 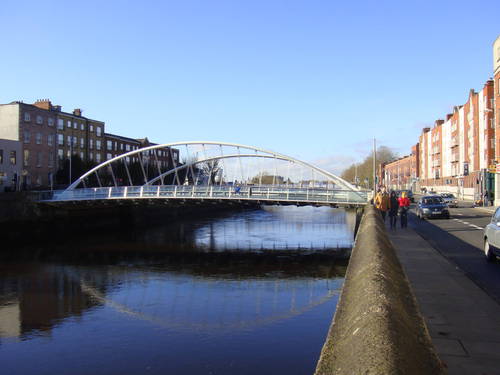 It is obvious that, provided you wish to cross all bridges in Dublin, to have enough time available, and be able to walk for long distance at the same time. So, it would be the best way to cross O´Connell Bridge, the busiest bridge of the city, and look around river-stream, cross the street and look against river-stream again. A town, the banks of which are connected with so many bridges, could not be parsimonious to their inhabitants nor to their guests. The bridges are acting as the arms,carrying the people over all troubles ahead. And who would be able to feel their resolution, will understand, how difficult it would be, to leave Dublin, and how absurd it would be to ask for, provided they do it, to forget for ever this town along both banks of Liffey-river.