Published: 16.2.2008
This mountain-rainge, omitted region in recent times, has interesting history and its indisputable importance. It changed from industrial and mining industry to tourist importance within past one hundred years.

Krušné hory (Ore Mountains) form natural northwestern border with Germany in the length of 130 kms. Its with makes 20 kms and extention of 1607 square meters. The essential part is placed in neighbouring Saxonia. From geomorphological point of view, Krušné Mountains are divided to Klínovec and Loučen Highlands. The whole system forms part of so called Krušnohorský system, consisting of Krušné hory (Ore Mountains), Smrčiny and Slavkov Forest (both on southwest part), Podkrušnohorský Basin (on southeast), Doupov Mountains (on eastern part), volcanic hills of Bohemian Highlands (on southeastern edge) and Děčín Hills (on eastern part).

The border of mountains forms Nakléřov Col (on north-east near to Tisá). Lubské Col is divided on southwest of  Smrčiny. Slopes on Bohemian part are relatively steep, falling to tectonic breakage of Podkrušnohorský Basin. On the other hand, on German border the mountain  hill-side is less slow. The average height excess moderately the height of 700 m. Anyway, the eastern part is relatively lower, its peaks do not reach the height of 1000 m.The western part is formed  by Klínovec (Jáchymov) hills with its dominante of Klínovec (1244m). Ore Mountains belong, thanks to its geological base, to Ore-Mountains Crystalinic, forming a part of old nucleus of Bohemian Massif. Its basement is created by very rich ore layers.

The geological history of Ore Mountains begins in Primary Rocks time-period when the layers  started to be established with oldest sediments and eruptives. These sediments changed slowly later in earth-rind, by means of influence of pressure and warmth, to so called grey and red gneiss – gneiss minerals. The correspondent geomorphological development of the whole system was hardly influenced within time-period of  Tertiary Formation of breakage tectonic, which caused hard declines on southeastern part of range and the birth of lake depressions.(Komořany lake, near to the town of Most). The movement along breakage lines, repeated several times, made easier the penetration of  surface-water  and helped the creation of deep transverse valleys. (Jáchymov valley, mighty stony fields and other decays on mountain slopes). The whole range has the character of mountain-plain, for its breakage character, which is better to be judged on Bohemian part of the border. Anyway, the influence of neighbouring which tectonic area of Bohemian Highlands assisted to lifting of Ore Mountain floe, so Sokolov as well as Most Basins were established. This area became later (after millions of years) the rich source of  mineral raw materials, especially ore, unanium and brown coal. However, its mining and working let to total devastation of the whbole territory.

The essential part of the range forms its hydrological importance. The whole area is rich on very valuable hot-springs activity and healing sources of mineral waters. Ore Mountains-territory is  drained by Ohře and Bílina rivers on its southern slope. The main water-axe is formed by Ohře river, enetering to Ore Mountains in Cheb-Basin. On the other hand, the Most-Basin is drained by Bílina river, which springs on slopes of mountains, not far from Chomutov. Along mountain-brooks, we find several artificial basins (Přísečnice, Fláje and Křimov Dams), serving as reservoirs of drinking water. Further, near to town of Kadaň, it is a water basin of Nechranice, used as water source not only for working order of electric power station Tušimice II but also fro holidays and sports-fishing.

The climate in the area of  this mountain range is naturally more inclemency, with violent storms, in autumn as well as in winter you can meet often wind tornados. A cold winter is typical for this area, with short and quite warm summer. The spring and autumn last during comparatively long period. The average temperatures in an altitude of 900 m of sea level are in level of 4 degrees of Celsius, in an altitude of 1200 m it is 2,5 degrees of Celsius. The tourists visit the mountains especially in winter. The snow covering reaches on many places the level of 4 m. The snow falls here nearly 100 days in a year (in an altitude of 1200 m  it is 214 days). The frosts are appearing also in June or in September.

In general, in Ore Mountains prevail north and west winds, they are humid and cold. The area brings quick change of weather, fogs in the morning, many times during the whole day. We meet the fogs especially in an altitude of 700 m.

The quantity of precipitations corresponds the placement of Ore Mountains and its altitude. On mountain-range falls 1000-1200 mm of water, in lower sites less (anyway, more on German part). Ore Mountains – as the whole – cause so called precipitation shadow in an area of Podkrušnohorský Basin. These precipitations fall in Central Bohemia, so within a year fall in this territory 500 mm only.

On edge of surface-mines, there were observed also whirlwinds with tornados parameters, which damaged the community of Málkov (situated a couple of kilometers distant of town of Chomutov) several years ago.

Podkrušnohorský Basin is not suitable place for wild animals (the raison is: de

nse colonization of people and of industry). Apart of this fact, within the scope of recultivation of mining activity, there are successfully placed  moufflon droves. Anyway, beter conditions are near to the border and in neighbouring afforested areas, covering 75% of mountain territory, where you find droves of deer, which number is increasing.

Flora and its quality-level is expressively changing within last couple of years. This development started with sulphur-removing of brown-coal-power-stations of 1990.

The original virgin forests, formed by mixed forests, were totally rooted up (during intensive mining and ore-working in past ) and substituted by pine-trees. However, these trees were  hardly damaged by industrial pollution at the end of 20th century. The pollution caused acid rains and successive accumulation of insect  evildoers, gales and hard frost.

This fact let to slowly to liquidation of great part of forests. These plain places are systematically afforested with woods which bear better the climatic conditions - they are, first of all, birches, larch-trees and silver-trees. 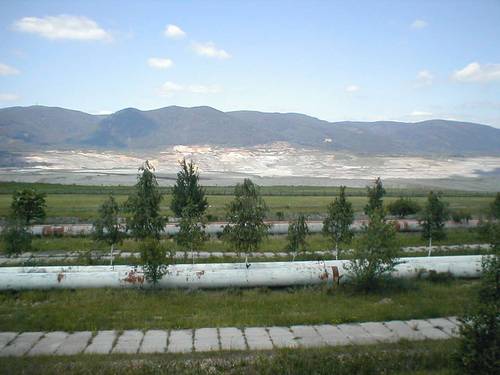 To tourist places of interest belong:

this 13 kms long canal is a memory for a period when in Ore Mountains there were mined tin, cobalt, manganese and other ores. The canal brought a water to gold-washing field in Dolní Blatná from Boží Dar, created in 1540, However, it is out of order since 19th century. At present, the canal is reconstructed and is protected as a technical monument.

this valuable peat bed is extending on a surface of 930 ha. In 1965, the area was declared as state nature reservation. It is most extended reservation of Karlovy Vary Region with Špičák Hill – dominanta of peat bog.

it is Tertiary Formation basalt pile with traces of lava pall. With its height of 1115 m it is the biggest basalt hill in Central Europe.  It is placed in Boží Dar peat-bog and is mostly afforested.  Ore Mountains Ski Route leads  on its south slope along deserted quarry..

is the highest placed town in Czech Republic (1028 m). The community is situated on border with Germany, three kilometers distant, in northwestern direction of Klínovec, biggest peak of Ore Mountains (1244 m). Boží Dar is an excellent starting place for run-skiiers, and in summer for walking tours.

is the greatest ski resort of Ore Mountains. It is situated 120 kms of Prague, near to German border. Ski routes of all stages of difficulties are regularly arranged. The centre offers snow-guarantee by means of modernised system of artificial snowing, covering 80% of descent routes of total length of 10,1 kms, of surface of 21,5 ha. Modern snowing system is fully automatised. Inside the area, there are available 35 kms of arranged ski-run routes. Further, it is to be offered: U rampa of category Superpipe and snowpark. Children up to 100 cm of height are transferred free of charge. In resort you find: ski miniarea, suitable for ski-beginners and families with small children. In miniarea, children –ski-towage is free of charge. Further services which are available: 2 ski-schools, 2 ski rental offices for ski-equipment, 7 buffets-refreshment and restaurants, wide offer of accommodation, 3 official parking places for cars with a capacity of 500 places.

ceiling hollow from exploited tin-mines (George and Wolfgang) caused  the establishment of two localities, very interesting from tourist as well as geological point of view. The holes became well-known with its air-circulation where so called cave-ice is creating. The places is accessible along tourist trail from Horní Blatná in direction to look-out-tower Blatenský vrch (Blatná Hill).

a pile hill situated 1,5 kms in northeastern direction of  community of Horní Blatná. You can find, in the surroundings, granite rocky formations and boulders, on slopes deserted  wreckages. On the peak, there is placed 21 m high look-out-tower of 1913, built of stones and wood.

Howerver, the building is not regularly open for public, it is accessible on weekends, during summer saison more often. Except of look-out-tower, you find here other buildings and TV sender. To the top of a hill leads an asphalted road, diversing from main road Horní Blatná-Boží Dar.

this is a spa and holiday resort, situated along the road leading to Boží Dar. The town of Jáchymov was founded in 16th century as a centre of  mining of silver. So called Joachimsthaler  thalers coined here, this name let later to the name of Americal dollars. Historical nucleus of Jáchymov was declared as a Town´s

Preserved Monument. Within 20th century, the mining of uranius was effected here, however the political prisoners had to work here. At present, the minings are out of order and closed. In area of Eduard mines, you find the routes and  shooting-range place for biathlon. In outskirts of Jáchymov, there are placed many ski-towages, descent as well as ski-running routes. From time to time, there are taken place here some competitions.

Spa tradition in Jáchymov is based on famous springs of radioactive sources, being organised here since sanatorium founding in 1911. Now, there are made cures of many kinds of diseases of moving apparatuses, nervous system, bloodvessels and metabolical disorders. You find here many possibilities for accommodation, rest and sporting activities.

Ore Mountains in general, offer excellent conditions for walking touring, thanks to its less difficult and less steep terrain. Extensive mountain meadows of plain are in winter an excellent place for ski-running traces.  We specialise in describing of  touring and cyclotouring trails in our further Ore Mountains meetings.

Do You Know, That? The Biggest Machine Of Czech R.

Published: 5.12.2010
After visits of technical museums, we shall continue in our technical spirit. Although Czech Republic has many nature beauties, some unique things could be found which could not bring a beauty to such picturesque countryside. But, on the other hand, a heart of lovers of heavy machines would be pleased, indeed.