Liptov Region has the space of 2000 square kilometres, whereas most of this area is covered with forests, inhabitated with approx. 140 thousands of inhabitants.

The area is placed in north part of Slovakia, in Liptov Valley, surrounded with mountain ranges: West Tatra and Choč Hills from north, Low Tatra from south, High Fatra from west and High Tatra from the east. Váh-river, the longest Slovak stream, flows throughout the valley, where Liptovská Mara, water reservoir, was built. From administrative point of view, the area is arranged into Žilina Autonomous Region, involving the districts of Liptovský Mikuláš and Ružomberok.

The first written notice about Liptov comes of 1231, but the archaeological findings confirm the colonization of this site from primeval age. The region was a part of Hungary since the middle of  13th century, an independent county was established there at the end of 13th century. So, the first mining communities were created there, where gold, silver copper or iron ores were excavated.

The region became famous thanks to their bricklayers. They passed frequently abroad. Even today, their works could be admired in villages, such as Hybe. Moreover, the people´s culture of this area was expressively influenced by shepherds. The products from sheep milk belong to the best quality of Slovakia.

Many culture as well as political personalities were born there, such as: Andrew Hlinka or painter Louis Fulla. Even Juraj Jánošík belongs to well-known historical personalities. He was caught in Valaska Dubová in 1713.

Many cultural as well as historical places of interest are to be found in the region, thanks to its rich history. To most popular places belongs the community of Vlkolinec, with its reservation of people´s architecture, registered in UNESCO World Heritage Survey. The other popular village is Východná, where folklore festival is organized each year, or Liptov Villages Museum in Pribylina.

We wish also to mention another typical villages, such as: Važec, Hybe, Liptoská Osada, Liptovské Sliače, etc., characteristic with is peculiar architecture as well as folklore.

So, if you decide to visit Liptov Region, you cannot miss Liptovský Mikuláš, Ružomberok and Liptovsky Hrádok, the greatest economical and cultural centres of the area. Except historical buildings and monuments, you cannot pass Slovak Nature and Cave Museum in Liptovský Mikuláš, Liptov Museum in Ružomberok or castle ruin in Liptovský Hrádok. Further, another ruins of Likava and Liptov Castles could be found in Choč Hills.

Liptov Valley is surrounded, from all parts, with the highest Slovak Mountain Ranges with its marvellous nature. So, Low Tatra National Park, including big protected Demanovská Valley, situated in south. From total numebr of 30 caves, three of them (Demanovská Freedom Cave, Demanovska Ice Cave and Demanovská Peace Cave) are open for public.

To most beautiful Slovak valleys belong, for sure, these of Kvačianská and Prosiecká Valleys, placed in Choč Hills. Big number of warm mineral waters and sources well up in the region, especially in the communities of Liptovský Ján, Bešeňová, Žiar, Pribylina, Závažná Poruba, Likavka, etc.

Summer season is connected especially with bathing and water sports in general, concentrated at Liptovska Mara dam. Summer idyll, even during colder months, could be preserved by means of Aquapark Tatralandia in Liptovský Mikuláš or Thermal Park Bešeňová with healing springs. These are fully used in Lúčky, Lubochňa and Korytnica.

Even less traditional sporting activities, such as paragliding, rafting, horseback riding, air-plane flights or hunting and fishing, are very popular.

You can find vast possibilities for accommodation. Provided you are looking for undisturbed relax in the nature, amd not far distant from busy town, you will be interested in Pension Villa Astoria in Lubochňa. You find there all beauties and possibilities, offered by Liptov Region. 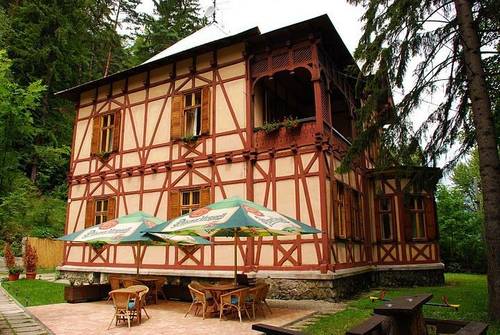 If you decide to visit Liptov Region, would you accept the invitation to taste traditional sheep-cheese pasta („brynzove halušky“). The meal will taste in best way directly inside a chalet or in one of numerous stylistic restaurants. And, frankly speaking, Liptov sheep-cheese is the best!

West Tatra Mountains allure, with its unique beauty and variety, the tourists from Slovakia and a...

Nucleus mountain range of Low Tatra Mountains is most extensive chain of Slovak Republic, and the...