By saying "not long ago" we mean 1960s when the town was in a desperate condition. Its historical center with typical Mediterranean architecture had been dilapidated and in decay. Fortunately, locals took initiative and begun with a gradual reconstruction. First the town of Perast had been trip destination for citizens of Montenegro, however, soon it was sought-after tourists from all-around the world. In 1979 the town suffered from strong earthquake, which caused temporarily conserved buildings to collapse. Locals had, and still have, nature of warriors and they had restored or conserved, step by step, collapsed and damaged buildings, so the time couldn't cause them more damage. Even today the town is full of construction works. 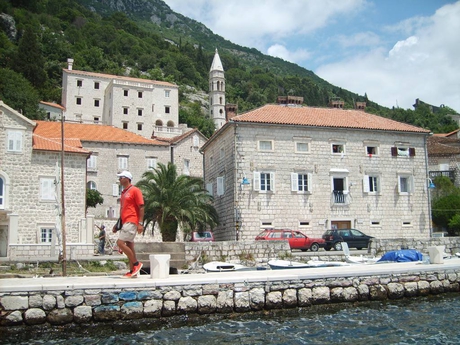 After arrival in the town we were greeted by the coast of the Bay of Kotor. The historic town is just on the coastline.  You wouldn't expect to need to have quite good shape for a walk in its streets. You ask why? It is because the town is lying on the hill. It is a wonderful experience to march up and down on steps. After this "touristic strain" you will be rewarded with a beautiful view over the bay, islands or "marine plantations" where they breed fruits of the see. 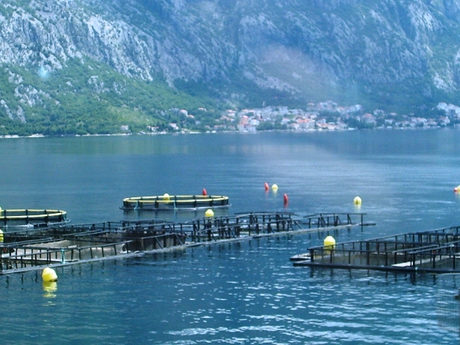 I couldn't miss out  a rich history which breaths on you from all-around.  In the 17th and 18th century  the town had been an important center of maritime seafaring. Until end of the 16th century it was a headquarters of an important naval school (Slavic vocational school). Many naval officers had attended it from far away. However, growing significance of the Atlantic trade caused that the prosperity of the town begun to fall. During  Turkish invasions the town had been closed and Turkish were not able to conquer it even with a great advantage in their numbers. These historic facts only support bravery of Perastans. 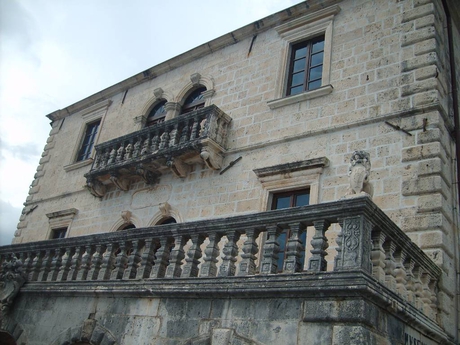 Nowadays, thanks to amazing mostly baroque architecture with bits of renaissance, we also can move back to the times of wars, renaissance, or former glory of the town. Ubiquity of  houses of rich built during 17th and 18th centuries shows towns importance. One of the most beautiful architectural masterpieces is the Bujovič palace, today the Museum of Perast (Muzej grada Perasta) depicting the entire history of the town. Above the town on hillside of the hill of St. Elijah there is Venetian Fortress with a small church. Thanks to it panoramatic view it is often visit by tourists. 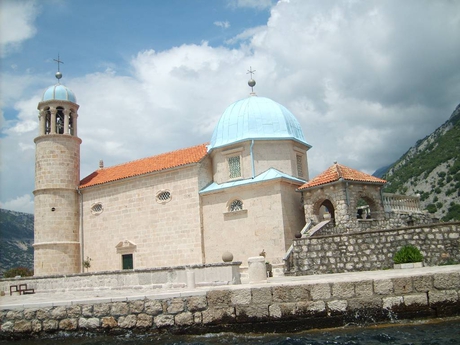 After exploration of the town, its streets and corners we admired two picturesque islands across from Perast. First one was Sveti Djordje. On the islands is a church which had been reconstructed few years ago. Right next to the church is Perast’s graveyards, unfortunately it is closed for tourists. The second island, Gospa od Škrpjela is accessible, so we moved in a small boat from town’s coast to the small island. While the first one was entirely natural, sailors had artificially created the second. It is said that every sailor after the return from a cruise threw a little bit of sand and some stone into the water and thus the island emerged. That way or another, on June 22nd by throwing stones around the island locals remember sailors who lived here and fought. It is also a tradition to keep the island safe from sea waves. We explored baroque church from the 18th century, which was inside decorated with beautiful paintings of Trip Kokoľo. In the back of the church is situated a small museum showing mostly a maritime history. 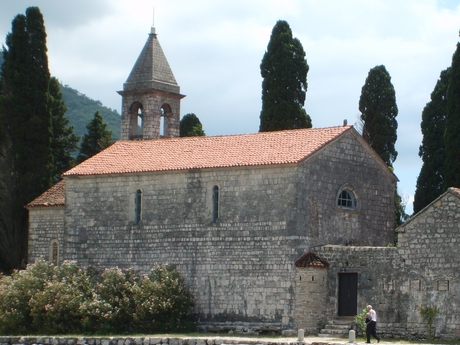 We were impressed by Perast. It’s picturesque beauty is simply magical. Once it had been a rich and famous town – there were  golden goblets, decorations made of rubies, rich costumes and other things.  Today, thanks to pleasant climate, Mediterranean greenery and amazing, but still dilapidated, architecture it is a place you should visit. Locals will gladly share with you some stories, even pirate stories. It is a town you will fall in love with.