As said earlier, Poznan is one of the oldest and largest cities in Poland. Such a large city must have an impressive city center. As you have learned last time, Poznan has it.

The town hall dominates impressive Old Town. The building is quite unusual yet very interesting. Its current look comes from the second half of the 16th century when

it was renovated. The works were led by Polish-Italian architectGiovanni Battista di Quadro. Di Quadro also designed Bishop Adam Konarski’s tomb that you can find in the cathedral in Poznan. Also some town houses carry architect’s imprint, although the town hall is his greatest legacy.

The distinct tower of the town hall was destroyed with its clock at the end of the 17th century. In the 1690s it reached 90 meters of high. Soon, other natural catastrophe made its mark on the town hall. This time a hurricane that hit the town hall in the 1720s. 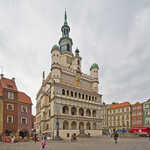 When you happen to stand in front of the town hall, look at left bottom corner of its clock. There are two mechanical goats set in motion every noon.

Legend has it the goats appeared there because a cook responsible for cooking a deer burned the meat. Desperate cook tried to replace it by taking two goats on a near meadow. The goats, however, ran away from him up to the tower where they caught attention of people. They began to butt and amused its audience. This saved the cook from a punishment. The nobility then ordered two mechanical goats to be installed into the new clock.

Stary Rynek square is not only about the town hall that hosts also the Museum of Modern History of Poznan.

There was a town weight building behind the town hall, called Waga Miejska. Weight of goods was checked there. The house was built the beginning of the 16th century yet by the end of the

19th century it was considered unsafe and demolished. Its present look is a result of renovation in the 1950s. Another renovation was done in 2002. Today, the building is used for ceremonial purposes such as weddings.