en.infoglobe.cz » Poland, Poznan – The City on the Warta III

As we have already seen its center, Stary Rynok square, lets take a look around. A nice sight to lay your eyes upon is a fountain Bamberg Girl’s Fountain. It is a memory of a tragedy and consequential revitalization. In the first half of the 18th century, Poznan experienced disaster after which it had to be resettled. A series of wars, such as the war of Polish ascension, Seven Year War, or the Bar Confederation rebellion significantly damaged the city. This was not all for Poznan was hit by plague and floods.

This caused its population to rapidly decrease. It fell from 20 thousand to 6 thousand during 130 years. New settlers from Bamberg and the Netherlands were lured there to resettle Poznan. The second partition of Poland in 1793, made Poznan a part of the kingdom of Prussia. Anyway, back to the settlers from Bamberg. Mostly poor farmers rapidly assimilated yet they preserved some of their traditions and cultural heritage (folk costumes). The fountain was built in 1915. It was financed by the Goldenring family. Every first Saturday in August

, the descendants of Bamberg’s emigrants gather to remember the arrival of their ancestors in Poznan.

Now we leave Stary Rynok to see where culture happens in the city.

For instance, the Great Theatre on Fredra Street was designed by Max Littman, a Munich architect. It was built during the years 1908-1910. The first season was ceremonially launched with Mozart’s Magic Flute. The neoclassical building avoided any serious damage in the second world war.

The theatre’s patron is Stanislaw Moniuszko, famous 19th-century Polish composer, musical director, teacher, and organist. His bust is to be found in the park named after him.

As we talk about theatres and culture we have to mention one of the top cultural events of the year – the Malta Theatre Festival, held on annual basis from late June to late July. Despite the similar name 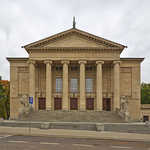 as the Mediterranean island state, the only thing common with the latter is the name given in honor of the Knights of Malta order.

It takes places around the artificial lake, which is 2,2 km long and has an average depth of 5 meters. Some theatre performances are played around the lake, other around the city.

In addition to that, the lake is a center to many other activities like aritificial ski slope, ice rink, or zoological garden.

When you are in Poland you have to see POznan!