When speaking about Paris, it is a must to start at its greatest dominanta, Eiffel Tower. This iron colossus, 317 metres high, is an object, very often pictured  as a souvenir, so each tourist wishes to visit it. The tower got its name after architect Gustave Eiffel. He constructed it and open for public in 1889. To tell the truth, the tower was not too popular from the very beginning of its existence, and the people took it as deformed building. Anyway, nobody believed that this construction would become a symbol of the town within future time period. So, provided you decide to visit this attraction, you would be quite patient, as its „magic atmosphere“ is rather damaged by waiting in long queue, when you are forced to wait for lift upstairs. On the other hand, there is some small advantage: you can mount the stages up to the second floor, and so save a lot of time, by watching around. Nevertheless, you have to calculate with a fact that your lungs will be in trouble - you have to overcome several hundreds of staircases.

Except famous Eiffel Tower, there exist here another places of interest which could stun you

with its beauty. It is, first of all, Monmartre Quarter, including unique Sacre-Coeur Basilica. Monmartre is situated in high hill, and it is often taken for a quarter of artists. However, this fact was obvious especially in past. Famous artists-painters, such as Claude Monet, Pablo Picasso or Vincent van Gogh lived here. At present, this place is famous for its night life. You can find here many restaurants and night bars, but also numerous quantity of houses of prostitution, including famous Moulin Rouge Cabaret. The crowds of tourists are to be found here also during a day. The visitors walk along towards bright white Sacre-Coeur Basilica. This non-zypical architecture attracts everybody. It was established by connection of Byzantium and Romanesque styles. Roman Catholic Basilica is a work of architect Paul Abbadio. Its construction took quite long time period (started in 1878, but finished when the 1st World War was over). At present, you can meet here so called street artists, playing various musical instruments, so your visit becomes more pleasant, listening to the songs of all these singers. Except of all of this, there is wonderful view around Paris, just from this place.

Notre Dame de Paris is ostentatious Cathedrale, acting as another typical symbol of Paris. This Gothic building is generally taken for one of most beautiful and most perfect constructions of the world. Its construction was started in 1163 (within rule of King Louis VII, accourding to

instructions of Bishop Maurice de Sulla). Owing to the fact that it was very toilsome construction, the Cathedrale was terminated two centuries later, in 1345. In the course of 17th and 18th centuries, this Cathedrale undergone great changes. The building was hardly damaged, however, some glassed windows and many real treasuries were completely destroyed here. Notre Dame became even warehouse for certain time period, so no wonder, that the building came into crashed state. It was good luck that just in 1845, lasting for 23 years, the successfull reconstruction started. The Cathedral, situated on Ile de la Cite Island, was a witness of many interesting events. One of them was, for instance, the coronation of English King Henry VI. in 1630. 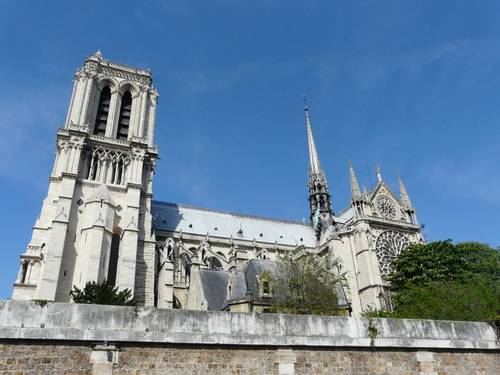 Provided you are lovers of modern architecture or if you prefer a walk throughout the town, so the ideal target of your excursions could be La Defense, modern quarter. The fact that this is really modern quarter, there is an evidence that the oldest building comes of 1958, when the building activity was started. At present, most of buildings are being used for office purposes. Anyway, so called Great Arch is most attractive place of interest of this quarter.

Published: 11.7.2009
In Paris, you can find several places known as oasis of calm, indeed. They are very popular and the inhabitants spend here their periods of relax. Provided you visit this world´s metropolis, do not hesitate and enter one from local gardens.