Banska Bystrica was the center of Slovak National Uprising. No wonder the memorial symbolizing resistance to Wehrmacht troops entering Slovakia which were armed forces of Nazi Germany. 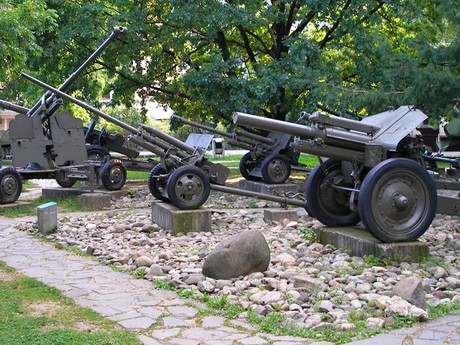 It is really easy to find the memorial Go to the city center. At the clock tower turn to Kapitulska street . You will find the memorial quickly then. It is open all year round to the public. Near city’s historical fortification, there is a large broken heart . A wide open staircase leads to this sculpture making it to look even more grandiose than it already is. Dusan Kuzma is the architect behind this work. He also designed the new building of Matica Slovenska.

The history of this building begins in 1957. Then its location was determined. However, the construction oulwd start much later. In 1959, Dusan Kuzma won a competition. He and the artist Jozef Jankovic joined forces and created a work which combined art and architecture. In 1966, the fortune smiled upon them. In 1969, the memorial was finished. The building became a symbol of hard times for Slovak (and the humanity). Also, it operates a museum. It is situated right inside two concrete “shells”. A hall is at disposal for scientists. Often, also exhibitions take place there. Depositories and storage are in the building’s underground. You can get there by walking down a staircase outside. Interesting expressive sculpture which depicts how people suffered during the war and also the hat of Janosik. Eternal fire burns in front of the memorial to remember the dead. 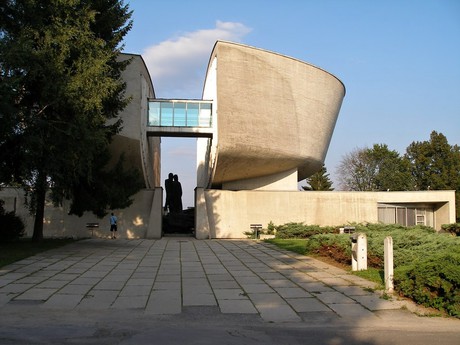 The museum will take you through history of Slovak society between the years 1918 and 1948. It focuses on anti-fascist resistance and also displays decisive political, military, and social happenings in Slovakia. Indeed, you can learn there a lot on Slovak National Uprising. There are more than 70 thousand items in various collections and 135 000 archived items. The library holds more than 20 000 documents. The museum’s field of activity is not limited only to Slovakia but also it operates in international space. It consults, or does some methodical and coordination activities. Once a year it organizes national celebration of the Slovak National Uprising. Via its mobile app it constantly tries to bring Slovak and international history to young generation. 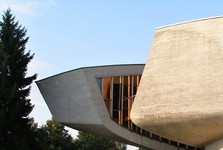 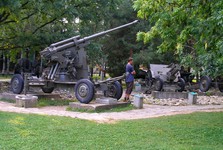 Heavy wapons displayed in the open air caught our attention. There are Czechoslovak, Soviet or German heavy weapons. Also you can see there carriages of the improvised armored train Stefanik. Li-2, a passenger bomber jet was also interesting for us. Last but not least we learned that the SNP Museum administers Germany Memorial in Raztocke valley, the national cultural sight of Kaliste, the Memorial to Tokajik tragedy situated in the town of Tokajik or the Slovak National Display – the Tragedy of Slovak Jews in the Auschwitz-Birkenau State Museum, Auschwitz. 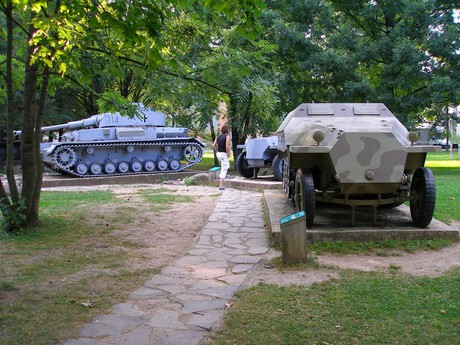 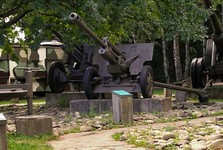 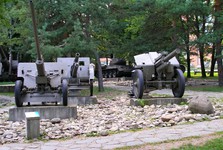 We were pretty tired and depressed after several hours in the museum. The things we are able to do as people… Still, we recommend to visit the SNP Museum. Recently we have been forgetting about our past and we must constantly remind ourselves what it was like. Only then we will avoid making the same mistakes.