Unseen wealth of animate and inanimate nature combined with remains of old history make of the Devinske Karpaty region admirable complex of localities. Several such places are located in the northeastern of Devinska Kobyla (514 meters above the sea level). These places are accessible usually via forest pathways which go from Devinska Kobyla and Dubravka; or, also, via road between Dubravka and Devinska Nova Ves on the direction to Technicke sklo factory, via Agatova street; or yo can go there by a public transport bus from the station “Technicke sklo”. Both are accessible when you take a turn on the D2 highway to the second-class road No 505 near Lamac and continue to Technicke sklo. Natura gem of Bratislava - former Stokeravska lime works quarry and surroundings are popular among tourists and especially among people who love adrenaline adventures. Villa rustica, an archeological locality offers information on ancient settlement of this region. 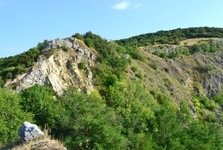 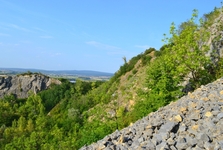 Stokeravska lime works
A lone quarry of former Sotkeravska lime works is located in hills of Devinska Kobyla mountain. The quarry is located west of Technicke sklo factory between Devinska Nova Ves and Dubravka, both are district of Bratislava. The best access route is via Agatova street, in the end of the street there is a forest pathway leading just to the locality. Stokeravska lime works region is a protected landscape area. Since 1993, it is a protected area of 12,72 hectars and of 4th degree of protection. This area is somewhat of window to old history of this region. Steep walls uncover 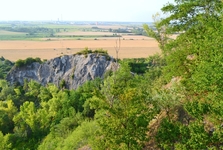 mostly lime stones of the Jurassic Age in this vast quarry. There are preserved remains of karst formations represented by SINTRA crusts, karst cavities as well as well-preserved remains of karst decorations. Walls of the quarry are eroded, vertical cracks are filled with sediments dating to the Tertiary. Also many paleontological findings have their origin in the Tertiary, such as fossil neogen fauna of vertebrates. Stokeravska lime works boasts also with rare fauna and flora. One of the most important representatives of protected plants is Adriatic Lizard Orchid, one of the very rare species among the orchids. This area is well known for sporting activities people can perform there; among the most popular is climbing and paragliding. Also, several mountaineering trails of different difficulties lead through walls of the quarry. Fans of paragliding often visit this area for open grassy filed creates just enough well conditions to do this adrenaline sport there. 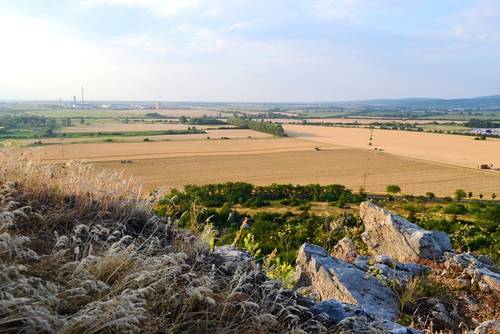 Skalní okno a jeskyňka
Very near by Stokeravska lime works quarry you can admire another fascinating inanimated nature formations – a tvrdos and a cave. Tvrdos is a bizarre and isolated rock formation with preserved rock window that is made of the Triassic quartzites. This unusual massive bloc is about 7 meters high. The rock window is located on its top and it has about one meter in diameter. Tvrdos is located by a tourist pathway in forest in the east edge of former lime works quarry. Near this rock formation by a forest pathway there is another geological sight – a cave. This little cave of corrosive origin is 16 meters long and is created in contact place of the Triassic quartzites with lime stones. It is a small cave with lowered ceiling; going further into the cave is restricted. 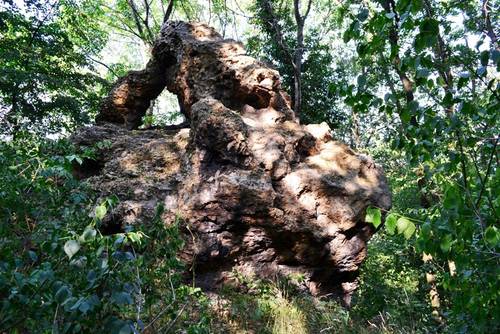 Villa rustica
Villa rustica , an archeological locality is located northwest of Dubravka, in Velka louka region. It is surrounded by the Devinske Karpaty mountains and the best way there is via a tourist trail leading from Dubravka, or from Agatova street from Technicke sklo factory. The place of discovery is right by the tourist pathway so it is really hard to miss it. The locality consists of rare foundations of private roman spa built in the 3rd century A.D. During archeological explorations there were discovered predominantly roman coins, clips, remains of pottery and mosaic glass. Villa rustica’s importance was emphasized when it was declared national cultural heritage in 1990. 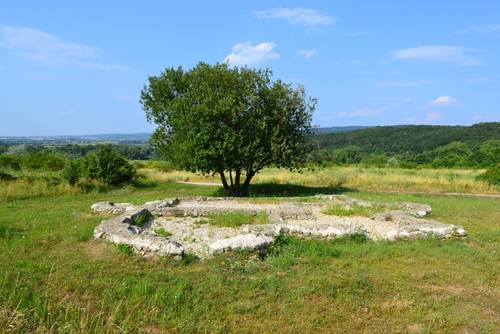 The above-mentioned localities located on northeastern slopes of Devinska Kobyla will catch attraction of everyone who love nature, history or adrenaline sports. These extraordinary natural gems are by no means places you should visit in this area of the Devinske Karpaty. To visit them you can recommend to everyone who love nature and want to discover surroundings of Bratislava.