Not far from the spring of the Rajcianka, in the beautiful nature of the Strazov Hills is peculiar Slovakian village of Cicmany. Many tourists visit it every year. They come not just only from Slovakia but also from more remote corners of Europe or even from across the ocean. Cicmany is the highest village of the Zilina Region. First note comes from the year 1272. Today the village is known for its unique folk architecture, and painted log cabins. 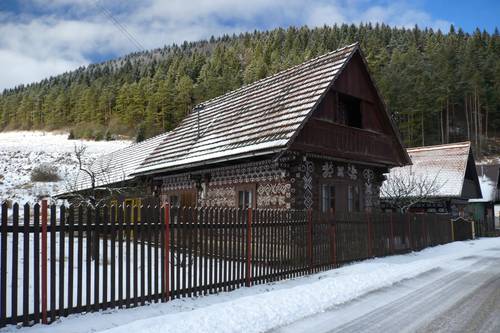 Bottom part of the town was declared the reservation of folk architecture in 1977. White ornaments are typical for log cabins in Cicmany. You can see there motives of fauna, flora, figures, hearts, simply everything you can thing of. 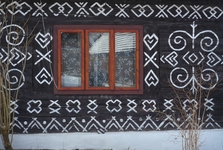 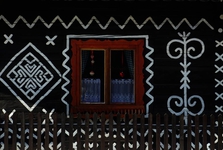 Cimany ornament as stylized geometric feature developed first as Cicmany embroidery, later it changed to decorative feature on outside walls of log cabins. Originally, the decorations were done with white mud, later with lime the function of which was also to conservate and protect. Today, Cicmany ornaments are important part of national art. This national motif, hard to be omitted, was inspired by traditional painted log cabins of the village of Cicmany. It appeared also at the 2012 Olympics in Londyn which Slovakia attended for the 10th time. Two years later, the motif appeared on the Slovak athletes’ clotehs at the winter Olympics in Sochi. 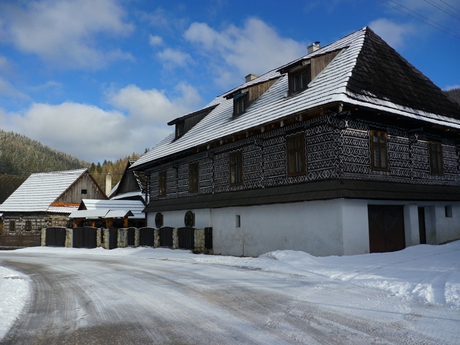 One-storey Raden’s House and neighboring Gregor’s House are among the most preserved. Perhaps this is why they set there permanent exposition of national history..

Should you visit this beautiful village, visit Baroque church of Founding of the Holy Cross or Baroque-Classicist chateau built in the end of the 18th century, the only thing which has been present from the northern part of the village. Once it was used by administrator of local bureaucrats. In the chateau were also stables, sheepfold, pub, and a barn. Today, there is a hotel and restaurant. We shouldn’t forget famous celebrities. For instance, in Cicmany was born Professor Jozef Kresánek, a composer and musicologist, or academic painter Matilda Cechova, or carver of folk art Vít Pieš. 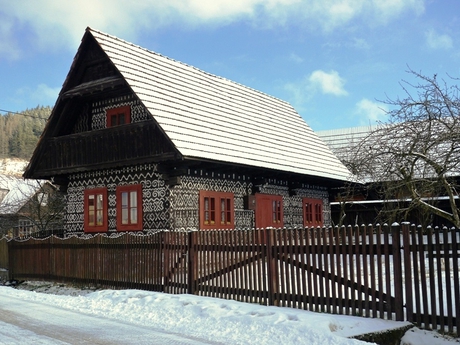 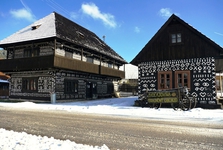 Virgin nature that holds Cicmany is ideal for hikes, picking up mushrooms and berries, or searching for healing plants. Except some popular tourist trails there are also bike trails. Up from the hill of Javorinka, you can see people performing paragliding in good weather. Nor in winter would you get bored there. All lovers of winter sports can enjoy a small ski resort with almost family atmosphere. Three ski slopes of various difficulty are equipped with five ski tows. Also, there are other ski facilities such as ski service, ski rental left-luggage, ski school, or fast food right at the ski slope. There are two marked cross country circuits which are maintained and, if needed, covered with artificial snow. 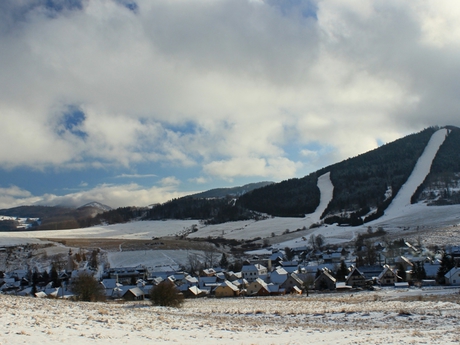 Do you still hesitate to visit Cicmany?

Published: 17.6.2010
The town of Rajecké Teplice is placed in Žilina Region, inside picturesque valley of Rajčianka-river. The seat became especially famous for its nature healing thermal spa. belonging to most known and most visited spa-towns in Slovakia.