A gate to Gaderska Valley is the village of Blatnica which is known for the findings which discovered the so called Blatnicky sword. Also the village is known for its famous natives like MAsa Halamova, the first Slovak botanist Izabela Textorisova, or famous photographer Karol Plicka. There is also a Renaissance-Baroque style chateau, folk houses, or castle ruins. The village became famous thanks to film industry, namely Siakel brothers who made the first Slovak film about Janosik. Anyway, today in the center of our attention is Gaderska Valley. 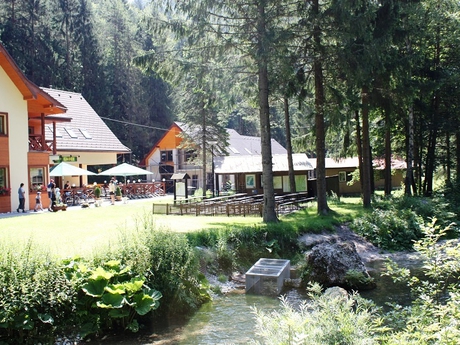 As we have already leanred about its location, lets take a short walk. And lets leave your car before the SNP memorial at local parking place; or near cottage estates. Then just follow a yellow tourist trail. Local nature consists of green forests covering the Velka Fatra mountain range as well as rock gates, holes, columns or other natural phenomena. The are of the valley is rich on fossils and rare fauna and flora. One can see monumental oaks, spruces, pines, or small plants such as primula, pasque flower, aster, or lilies. Such a botanic garden is hard to see anywhere else in Slovakia. The are a is also known to be rich on herbs. In the past healing oils wer emade of them which then spread to the whole world. 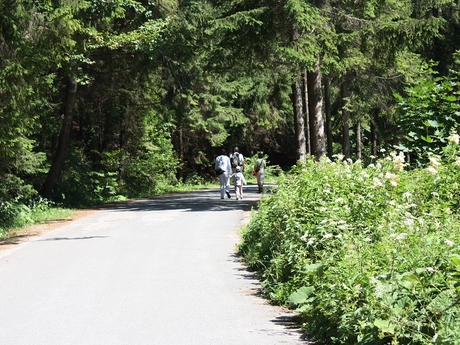 Of fauna one could name deer, boar, bear, wolf, and fox. It is interesting that one could see also chamois imported there from the Czech Republic. Or also lynx is to be seen there. Also eagle, falcon, horned owl, raven etc. We haven’t seen any of the named fauna species. We were glad for that. One never knows how such an encounter might develop. 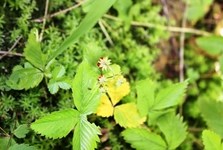 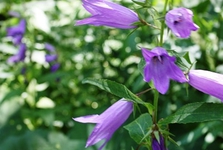 Anyway, to see salamander, , longicorn, or Old World swallowtail would have been an astonishing experience. Yet it would take us too much time. There are thousands upon thousands organisms that have been protected since 1972 as a part of the National Nature Reservation of Tlsta. Since 2002 it has been the ninth National Park of the Velka Fatra. 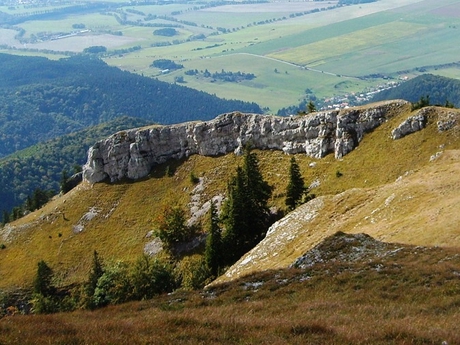 On our way through 18-km long valley we had encountered information boards belonging to a nature trail. It led us to the already mentioned ruins of Blatnicky castle. We didn’t plan to visit it so we went further on. Of course, we only must recommend you to see this former medieval castle and also vistas of wonderful Turcianska Valley . 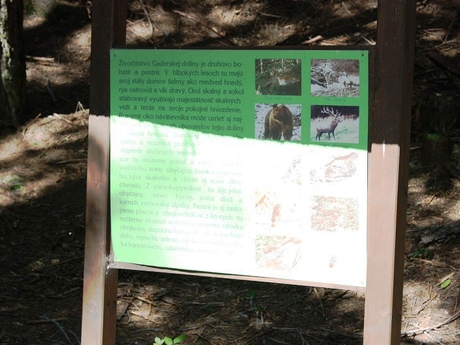 Gaderska Valley is a starting point for climbs to the top of Tlsta. Within this hill there is Mazarna cave , Ostra cave that is secured with chains. Or better fit toursist can see the tops of the hills of Ostriedok and Krizna. Had we continued on through the valley, we would see two large rocks called Devil’s Gate. Behind it there is the area of Selenec and National Nature Reservation of Padva which is, however, closed to the public. It is possible to ride through the valley by bicycle, perhaps the best option. Nature itself would navigate you. A creek runs through the valley and its cascades create beautiful natural performance.

As we set off pretty late in the afternoon, we turned back and went to our car after about an hour of walk. 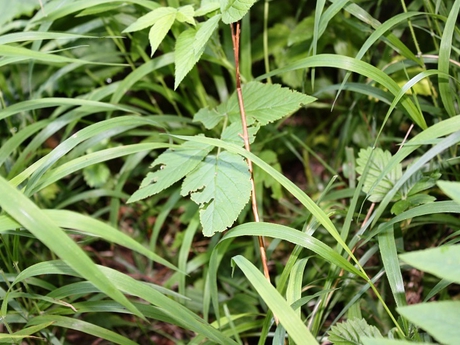 When you find yourselves at Gaderska Valley be careful when seeing the name of Gader. It labels several valleys between the village of Blatnica and a ridge of the Velka Fatra. All these valleys are truly magnificent. They are great places to put on your trip plan; for instance one going through Blatnicka valley, Kings’ Well, Dedosova valley, and Gaderska valley back to Blatnica. Of course, you should consider your possibilities as we did. Our great experience with this place motivates us to return there and do the trip one more time.