You can get very easily to Bilík’s Cottage. The shortest way is, perhaps, from Starý Smokovec to Hrebienok and from there it is a mere half an hour of walk along tourist pathways to the cottage itself. Of course, there are some trails from Rainer’s cottage or Tatranská Lesná however, they are longer. 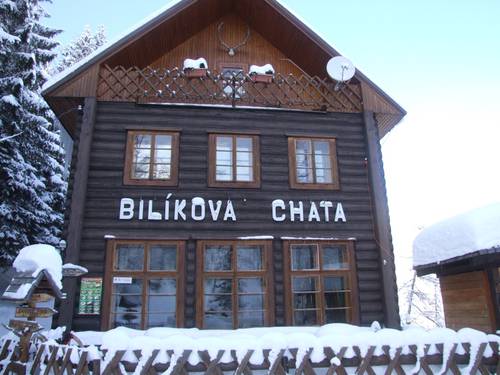 The southeastern corner of Slavkovský štít known as "Kancel" became a home to the Bilík’s Cottage but before it there was a simple Růžena’s cottage , later supplemented with a tourist hotel. The first of these historical milestones has its origin in 1875. Eighteen years later were local buildings demolished and two hotels were erected there and created a small settlement known as Studenopotocké lázně. The settlement had great plans that included completion of six buildings with 400 rooms, opening of a cake shop, beerhouse or own cattle farm. Nothing of this happened. Shortly after the second world war a building of the health resort was demolished. Even later investments were not sufficient to safe the spa because the spa burned down at the beginning of 1927. On their original place there was built a single-story building with a kitchen on the ground floor and accommodation units on the first floor. The whole construction was planned by dr. Michal Guhra Jr., who, unfortunately, didn’t live long enough to see the ceremonial opening. The cottage was named after him, the Guhr’s cottage. 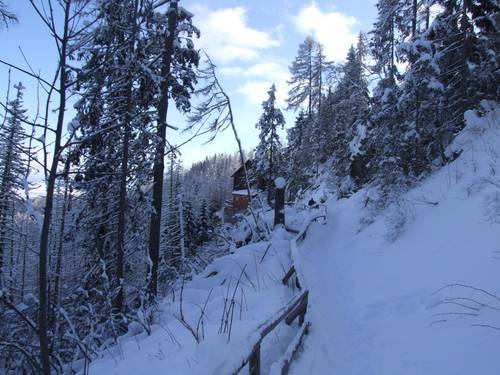 This tourist accommodation with a restaurant was adapted to requirements of young German tourists of the Carpathian Association. The ground plan of the cottage was enlarged in 1936 that meant the capacity had risen from 40 to 58 beds. After the Second World War, in 1946, the cottage was taken over by the Club of Slovakian Tourists and Skiers (KSTL). The club changed the name of the cottage to the Bilík’s cottage. The cottage had underwent a renovation, in its vicinity there was built a hostel that was, unlike the cottage, without any water or heating. The hostel was improved as well as the Bilík’s cottage the use of which expanded to the winter season. A terrace, showers, central heating were added to the cottage. In 1965, the works were completed and according to an inspection committee Bilík’s cottage the best equipped cottage in the High Tatras. Improvement reflected on prices that were not particularly affordable in that time. The cottage was accessible by car.

Another significant renovation that partially changed building’s exteriors happened in 1922. The walls were. I would like to mention an important cottager who is sort of a spirit of the cottage. The cottager who spent most time there was Rudo Kacian, he administered the cottage for long 29 years. Perhaps you ask, why the cottage is named after Bilík then? This is derived from the name of the financial guard inspector Pavel Bilík who happened to be also a very active ski contestant of KSTL. Mr Bilík was involved in the Slovak National Uprising in fights that took part above Horní Smokovec. He was captured by the Germans and on September 7 1944 he was executed at Kežmarok castle. In tribute to his memory the cottage was renamed and his name, the name of the Slovakian partisan, it carries until the present. 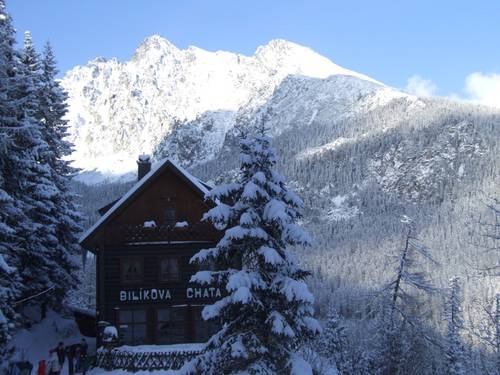 When Czechoslovakia split in 1993 the cottage had been privatized and since 1999 some Bratislavian company has been owning it. Mr and Mrs Fassinger are current administrators of the building.

The recent shape of the cottage is different from the previous. 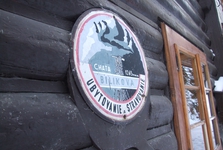 Once it used to be a tourist cottage, after renovation it became rather a hotel with accommodation units and later suites were constructed. Today, the cottage has 29 beds and its own filtered well. Supplies come to the cottage easily by cars via a road that lead right to the cottage. During the winter season a land cableway comes to use as well as snowmobiles. A relatively large restaurant offers many different meals. There is a wine bar and a sauna in the bottom part of the cottage. The cottage has become a popular destination for many tourists or less physically capable trippers thanks to whole-year operation and good accessibility or vicinity of the Studený Potok Falls.