en.infoglobe.cz » SK, Kremnica – Tourism as It Should Be

We planned the trip to take us entire day. Upon packing everything we needed we set off following the blue-yellow tourist trail leaving Kremnice downtown and the visitors' center behind. Gradually, we passed the edge of Bujacia Luka nature reserve. It is the place where Heuffel saffron grows. Tourist trails were splitting at a crossroads. We followed the blue trail than and crossed railroad. Mere hour and half later, we crossed Tri Studny and Trojice points and were approaching Hostinec hut, our first stop. 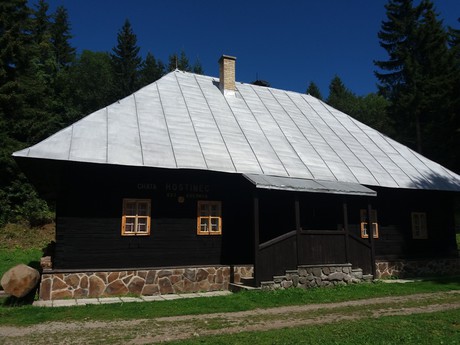 This is the only mountain tourist hut which is a place where you can rest and also eat something in the Kremnicke Hills. Hostinec hut has some long history since it is situated on the former postal route which connected mining towns in the area. As of today, it is administed by the Club of Slovakian Tourists. Once a postmen's inn they transformed it into a touirst cabin. It was rehabilitated in 2005. It is opened to the public. They offer accommodation (you need to book it in advance), drying room, buffe, and pleasant places to spend a while. One such place is situated before the hut. NEarby is also drinking water source - the so called spring of wounded soldier. There is no electricity at hut. Therefore, you can experience how it was before. Interesting is, that every year international cross country skiing championship Bila Stopa takes place there. Be no surprised that the trail is quite frequented in summer and in winter as well. Five tourist trails meet at the hut. You won't get lost. 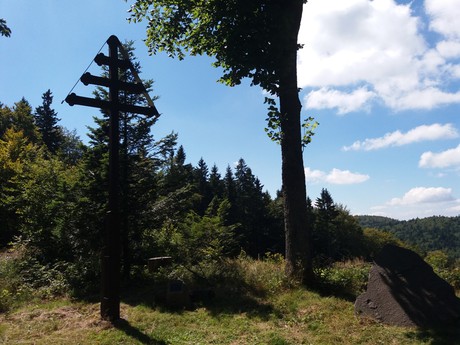 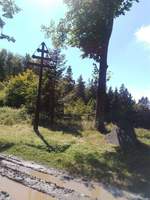 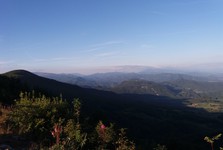 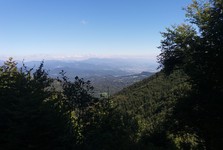 From Skalka, we observe the both sides of the Kremnicke Hills. We see Kraliky village and Banska Bystrica which is further away. We also spotted Skalka resort situated below us. The mountain rescue resides within the resort as well. Interesting fact is that this locality used to be called Slovakian Semmering in the past since there were the all-Hungarian ski races in 1914. Also, the very first Slovakian ski club was founded here. Also, the SNP Heroes Trail goes through here. 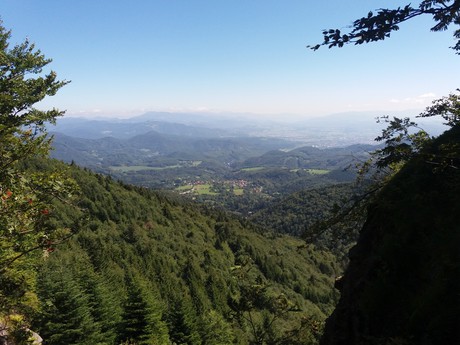 Once on Skalka, there are several routes which you can take to get back to Kremnice. The least difficult (of yellow color) goes across Partyzanske valley. Or you can take the red one towards Krahule village. So which one you think we chose? Of course, the one going on the ridge to the mountain village. 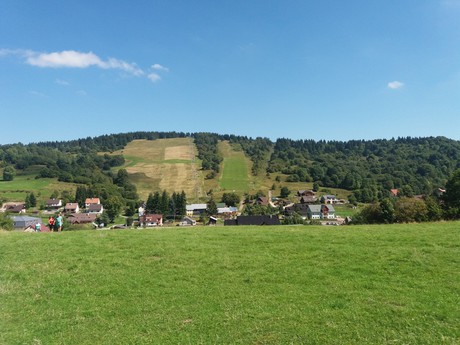 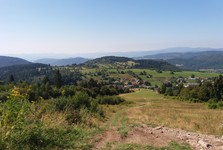 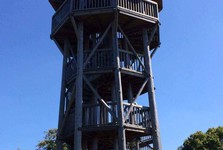 Krahule surprised us – not only we observed significant sports and ski resorts, we also happened to be at the geographic center of Europe. We also visited the recently built wooden observation tower. The observation tower on Krahulsky Hill (959 m) is 13,5 meters high. Up from there, you can see the Kremnice hills, Turcianska basin,  Stiavnicke Hills, Vtacik and Ziar as well. 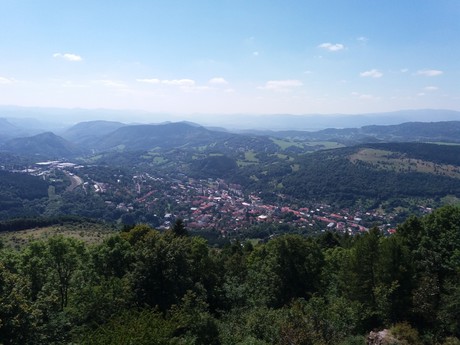 The observation tower was the last stop on our trip. As we were tired after entire day of walking, we went down a forest path to Kremnice. There we went into local restaurant and pondered upon our experiences of the day.