Get to the Calvary was no problem for us. It is about 20 minutes of walk from the historic center. It is easy to get there by car or the public transportation. We, however, took a walk. We passed by a beautiful structure of former factory, i.e. a complex of structures that belonged to a brewery once, from 1893 and 1895. The brewery made malt, dry draff, or saloon beer and lager. In 1926, the brewery, after it ceased operations, was used as a tobacco warehouse, drying room for vegetables, salt warehouse, or meat production facility. Brewing beer returned to Nitra in 1950. And the beer was critically acclaimed. Unfortunately, beer production was moved in 2003. The most popular Nitra beer is made, paradoxically, in Hurbanov. Meanwhile, small breweries try to save beer tradition. 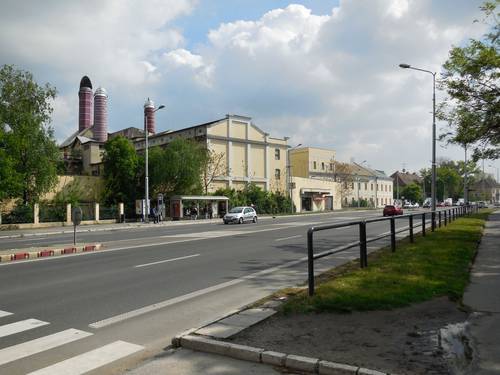 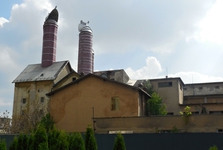 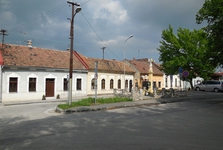 As we approached Calvary houses around changed. Large apartment houses changed to family houses. All of a sudden we found ourselves in front the Assumption of the Virgin Mary church . First written evidence comes from the year 1248. Inside there is the Virgin Mary statue holding Christ’s dead body. Below the church there is a crypt with monks of Nazareth buried inside. They used to have a church there once. Neo-romanesque Missionary House of Mother of God , the main residence of missionaries. 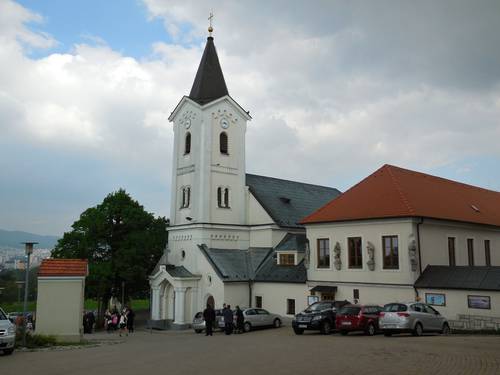 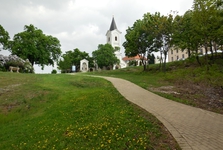 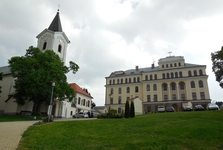 The church with its surrounding is popular place where wedding ceremonies take place. Also, it is an important sanctuary. The Calvary founded towards the end of the 18th century on a peak of the same name, is characteristic for its small chapels. They line the way from the church to the top of the hill and resemble the Way of the Cross. On the top, three crosses with a crucifixion sculpture stand. Also, there is the hexagonal Holy Grave chapel . Christian pilgrimages are held there every year. 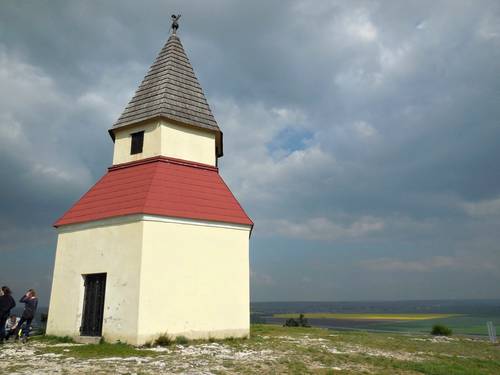 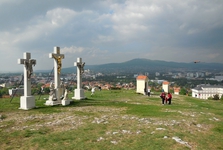 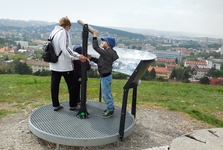 The peak of the calvary is at about 213 meters. There is a round view of the city and slopes of the Tribec, Vtacnik, Pohronsky Inovec, or the Zoborske Hills and surrounding planes. Upon tour in the church and missionary house (holding a missionary museum inside) we continued on in easy ascend, passing by chapels until we reached the top. There is an observation tower. A table in the shape of an arch depicted points of navigation. We were not alone! There were many people with us. Either they were families with children, individuals, or sportsmen. This marvelous hill lures everybody who loves nature. We became convinced that the place is of easy atmosphere and beautiful vistas. Children played with kites, adults sat in grass, bikers rode downhill. And we even saw climbers on southern limestone cliff, it is a remain of former stone quarry . 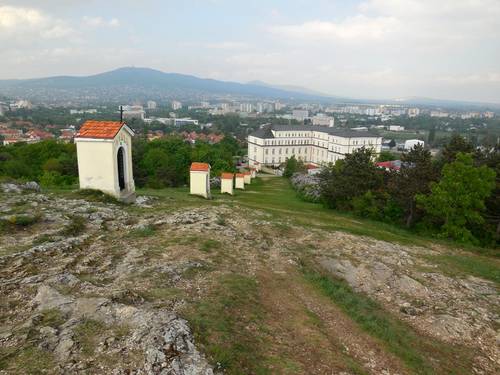 The Calvary hides many secrets. One of them is a cave that has lots of dripstones. They are to be found on the Straci Road below the peak of Calvary and also on other places. So far, they are hidden from the public. Moreover, there are rare plants, some of them are endangered. We could name you many other examples. 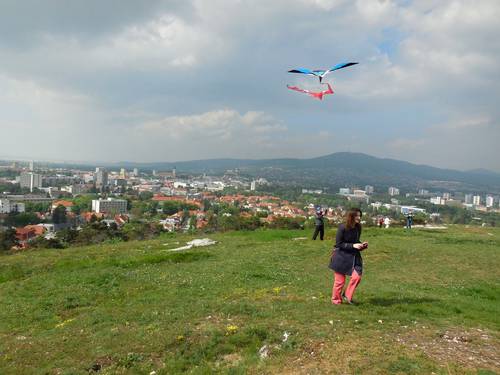 Upon seeing the Calvary we headed to the river bank of the Nitra River. On our way we encountered the Lurdska Cave that for more than one hundred years is a shelter for believers. Around the cave there are inscriptions of thankfulness and candles burn around the Virgin Mary statue. It is place of peace. We thought about our closest and asked for their protection. From this place we continued to the river bank. 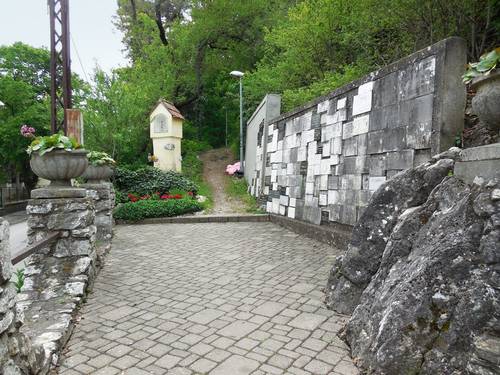 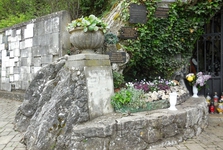 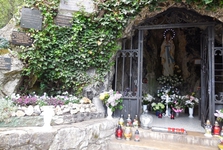 How our trip went on, what we saw and experienced is matter of next week.