Trencianska Tepla is an official railroad stop on the Bratislava - Kosice. We chose train to be our main means of transport. We were looking forward to take ride by so called "tram" to Trencianske Teplice from Kosice. It is somewhat a curiosity. It was the first public electrified railroad trakc in Slovakia. Unfortunately, we didn't go there for the tram operates only weekends. And this is only during season or on special occasions. We were bit disappointed for this is a remarkable tourist attraction. 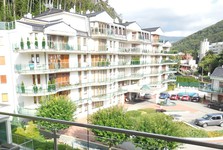 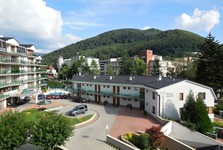 We were looking for another means of transport. There were two viable options – either go by bus (they travel almost every quarter of an hour) or by taxi. Taxi was our choice eventually We admired beautiful sections of the tram line on our way to the spa town. Also, we enjoyed nature of the region of Stredni Povazi as well as the Teplicka stream.  When we reached the town we saw and walk through the typical housing estates. Then we finally reached oru hotel which we had booked in advance. There we dropped our things and set off for the first walk in the historical center. 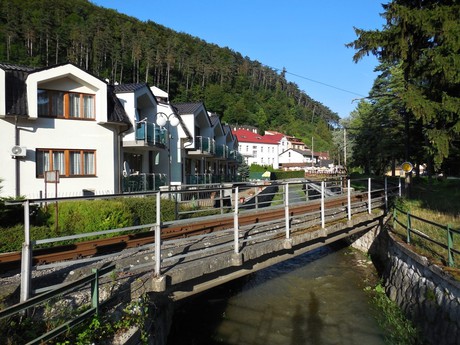 It wouldn't be typical us hadn't we took a glimpse of the history of this town. There is a legend about a paralysed shepherd. When he was looking for his sheep that went astray he found a small lake with warm water. He took a bath here multiple times and healed entirely. In reality, this town, Trencianske Teplice must have been known already by German tribes or Roman legions at the beginning of our era. The first written note comes from the year of 1247. For long centuries, the area of this town belong to the owners of Trenciansky Castle. The greatest development was done thanks to the family of lIésházy. During their rule, the spa became the most important of spas in entire Austria–Hungary. Vienese financier Juraj Sina bought the spa in 1835 and made subsequent rehabilitation and modernization. His son and daughter continued in his work. They constructed a hotel, expanded the spa park and built one of the most precious historical landmarks – Hammam, a Turkish spa in oriental Moor architecture. This building still stands there. 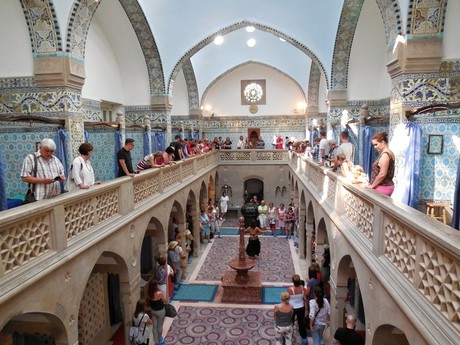 Trencianske Teplice offered complex spa services in the 19th century already. Later, the spa were bought by a Hungarian company. A Czechoslovak company took over the spa after the Great War. Eventually, teh spa has been administered by Lazne Trencianske Teplice company since 1995. 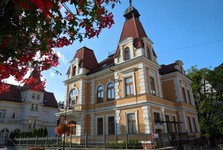 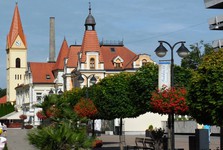 First of all, we had our doubts about the beauty of this town. However, once we entered the pedestrian zone our doubts evaporated. The pedestrian zone begins at Roman-Catholic church of St Stephen King which was built in 1888. What is interesting is, that the predecessor to this church was originally situated before Hotel Krym. This place was marked with a cross ever since. The interior of the church makes clear lines, colorful stained glass windows, altar symbolizing a stream springing onto the surface, and beautiful painted walls. After a short moment of contemplation we moved on.