Viglas has a very good location. It is set between relatively large cities like Zvolen or Detva. Therefore, it is easy to get there. We traveled by car. However, you should consider a train ride for you can enjoy beautiful views of the Podpolani region.

We had learned about the history of the castle while en route to Viglas castle. It is a very interesting history indeed. We learned that the history of the place dates back to early Middle-Ages. Then, there used to be a Slavic fortified settlement. Later, a cloister was built. The first written evidence date backe to the Louis I. era. The construction of this monument was later finished by the Roman-German Emperor and Czech King Sigismund of Luxembourg. He rebuilt it to a castle designed for hunting game. His wife Barbara of Cejle and him founded the Order of Dragon. The castle became the spot where its followers met. Throughout the times the castle became a place of rest as the documents from the era of Mathias Corvinus suggest. In the campaigns against the Ottomans, the castle also played a huge role. It received more walls with four towers. Insurgents also seized the castle. Feudal families owned it, and for a while it was a property of such houses as Csáky or Esterházy. They rebuilt it to a chateau. When we look into its recent history, the castle/chateau was badly damaged during the second world war. In 1945, it was nothing more than a ruin. In 2009, a private company bought out the chateau from the village. The company renovated it so you can see it in a great state today. 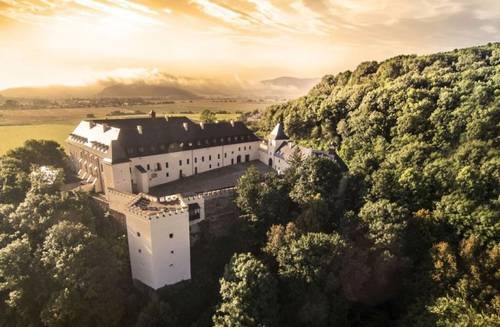 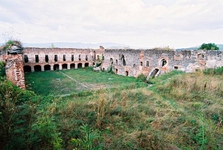 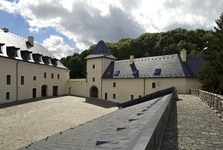 The renovation was supervised by experts of the preservation bureau. Therefore, the castle remained a national cultural sight. Right upon our arrival, we stated how unique it is to renovate a chateau so it would end up a hotel that offers wellness such as in the case of The Grand Vígľaš**** . Are you asking why? For us, the main reason is that the great sight has been preserved. The public, therefore, has chance to see a place that would have existed if it hadn’t been for this renovation project. 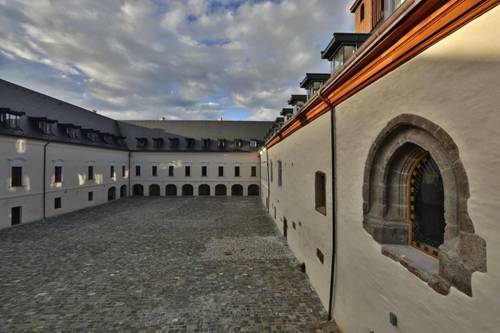 Upon our arrival, we approached the reception. We could choose a room in version Classic, Superior , and Deluxe. We took the one we liked the most. We got hungry so right upon putting down our stuff we set off to the restaurant Anjou Court. Grand style and a fireplace with a carving of Sigismund of Luxembourg hanging above astonished us. We chose a royal specialty. For a while, we got back in time to the“light version” of the Middle-Ages. Once we finished a marvelous lunch, we moved for a coffee to Louis I castle café. Inside its fabulous interior we reflected on our trips. 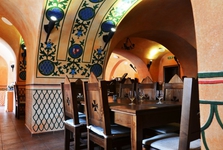 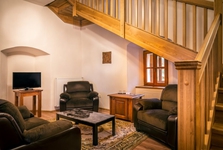 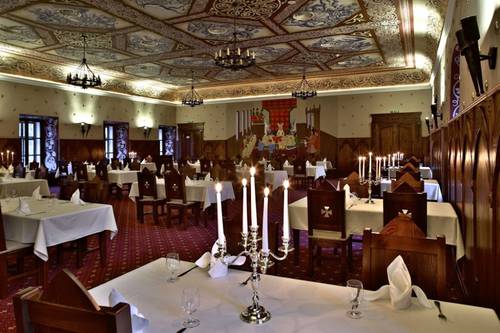 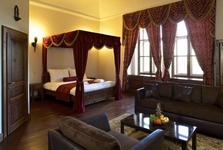 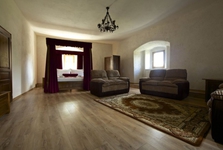 We had a coffee and, to be honest, also a pie. Then we moved to a courtyard. We were fascinated by a souvenir store that has a gallery, historical cannon, and offered information leaflet about a tour in castle. We were lucky for we arrived at the exact time a tour just was about to start. The tours are at 11:00, 13:00, and 15:00. What we have seen we won’t spoil for you. When you come at the castle yourselves, take a tour. 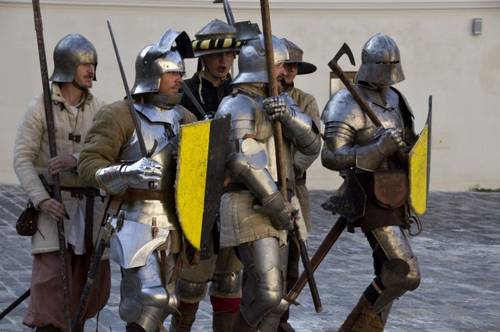 Ways how to spend free time are numerous there. You can ride a horse, try some adrenaline sports, or do some trips to nature. There are many interesting events through the year. This time, however, we gave ourselves a break. Therefore, we paid a visit to the wellness queen Barbara. We took a swim in a 10-meter long pool with a stream of water flowing against you. We left all of our stress in a Jacuzzi, regained energy from a massage and in sauna. It was true paradise. 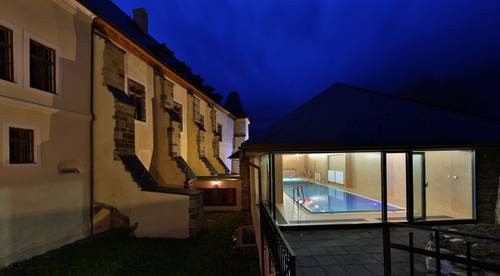 We were pleasantly tired and ready to hit the bed after all the therapy. We enjoyed the trip to Viglas Chateau. We enjoyed relax and also learning something new. One doesn’t stumble upon a place that would combine these two traits in such a great way like there. Also, the price was affordable. Moreover, we felt like royalty, for a while at least. Should you pass by Viglas some day, you must stop by at The Grand Víglaš****. Certainly you won’t regret it.