In the beginning of our article I would like to say that I am really sorry I can’t share with you my experience of underground beauty via photos. In the cave itself it is forbidden to shoot pictures or record a video. So the only photos I can show you are those from the cave’s vicinity or from nearby Postojna. Surroundings of the cave has magic of its own – a beautiful park with benches, wooden bridge or a beautiful watermill. It is an ideal place for a nice family picnic or romance. If you are going to visit the cave, you must count that you will need at least half-a-day to see it, because not only a visit of the cave itself takes many hours but visit in an adjacent park, as well. 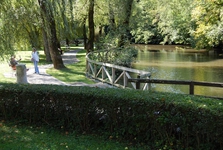 To the cave by a train

An interesting karstic cave system that is more than 20,5 kilometers long belongs to main Slovenian tourist attractions. Public has access to more than 5 kilometers of corridors. Visitors undergo the tour in a small train. Allegedly, it is the longest cave trail opened to public in the world. The ride in the train itself was, mostly for older people, exhilarating experience. However, it was a hilly ride rather than a scenic ride. Open carriages were whizzing really fast in the cave. Sometimes we thought we are about to hit some stalactite or a rocky wall. We really enjoyed the ride, however, some looked like they would never enter this train again. They even didn’t know there will be the same “fun ride” back after a walk in a park.

Not every hollow is same

Not only a fast ride in by the train, but also a walk in the cave had fast tempo, faster than we are used to in Slovakia. The whole cave tour elapsed very quickly, despite it lasted one and half-hour. After we got off the train we split into several groups. Every guide spoke in different language. Neither Slovak nor Czech languages were available we joined a group of Englishmen. We learned many things about the cave from a guide who spoke in a fluent English. Beautiful spaces in the cave were created by the Pivka River. The cave was opened to public already in 1819 and not long from now it will be bicentennial anniversary since people began to admire its beauties. One of the facts that was most interesting was that already in 1872 there was an electricity, even sooner than in the capital Ljubljana. During that time also a tourist train began to operate and last year it was 140 years since its launch. Postojnska Cave is one of the most diverse cave systems in the world. Except for krastic decoration you can also admire amphibian (Proteus anguinus) that you will most certainly spot. At the end of your walk tour you will get to a souvenir shop and public toilets. We were dismissed there for about fifteen minutes. After this we again entered the train and it finally brought us to daylight. One of interesting facts about the cave is that there are regularly held concerts and other social events. These events take place in so-called Concert hall, a one of the largest spaces in the cave. 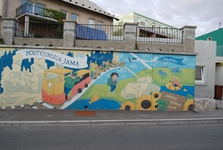 Only few kilometers away from Postojna there is a unique Predjama Castle (Predjamski grad). If you decide to visit it, don’t forget to buy a ticket package that includes entrance to both sights. You will spare only few Euro if you buy it for one person. However, considering a family of four or a group of friends you will see much greater difference and you can use some of spared money to buy some great ice-cream or a bottle of Slovenian wine.

How Predjama Castle differs from Czech and Slovak castles you will learn next week.

Price of tickets you may find HERE

Opening hours for public you may find HERE