Slovenia really got us. The country has not only a beautiful nature and unbelievable cultural sights, but mainly very kind and helpful people. Everywhere we got and every one we asked we always saw a kind smile and had our response. Younger generation communicated with us in perfect English (mine was far from their level, despite the fact I spent some time in England). Thanks to talks with older Slovenian generation, we found out our languages are very similar. If one try hard, he/she can understand others even without knowledge of his/her language. Well, first things first. 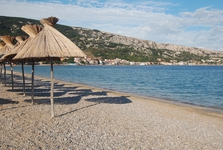 After wonderful four days of idleness by the sea in Croatian summer resort Baška on the island of Krk, we moved off to southwestern Slovenia to a small town of Postojna where live little bit more than 15 000 inhabitants. Fans of travelling from all-around the world know it thanks to its unique cave system - Postojna Cave. However, we were concerned about different things – where would be sleep? Since we heard from our friends that Slovenia is too expensive, we prepared plan B – to sleep in a camp. But, nights were becoming colder and we went to the touristic office on the square in the center of the town. We asked about some hostel, pension or small family hotel or affordable private accommodation. Woman in the infocenter pleasantly surprised us – the cheapest accommodation was 20€ per person per night and she found also some alternatives to that. We chose a private accommodation for 30 € for two per night on the edge of the town. Despite the location of our accommodation we were still close to the most popular sight of the area – Postojna Cave. We lodged ourselves; rest for one hour and fresh set out to the center for a supper. In a cozy restaurant not far from the central square, we ordered a Slovenian beer, I can’t remember now the exact brand, and we look to the menu to find some Slovenian specialties.

Despite the fact Slovenia is about the half of size of Slovakia the waiter told us in fluent English that the land is very diversified and local custom differ a lot in particular segments of the country. These differences could be seen also in Slovenian cuisine. So we couldn’t say there is a typical Slovenian meal, because in different parts of the country Slovenians would have different typical national meal. However, there are few famous such as yeast cake potica with different flavors in different regions. The most popular are walnut, herbal, or poppy. The waiter recommended us štruklji - a kind of cottage cheese strudel. We didn’t take it because we didn’t feel like having some sweets. On the other hand we were bit thirsty after a talk so we ordered another beer. Again Slovenian, however, a different flavor so we can compare. We liked both. Finally, we chose our meal and we decided to eat something similar to our goulash and roasted meat with cabbage and potatoes. Both meals were amazing. 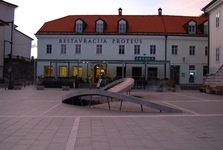 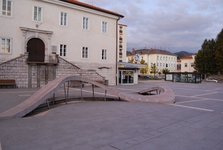 After the supper we took a walk. The town was calm and in this time of season there were not many tourists. Also the weather was pleasant. While we were sitting in the restaurant it had been raining. But now, now there were no signs of rain so we hung around evening streets of the town until we sat in the inn by a pétanque playground. We ordered a bottle of wine and observed local retirees enjoying the game. They also observed us and when they finished one of them came right to us and started talking. First, we didn’t understand any word. He knew neither English nor German and just continued in his Slovenian. After a while, when he slowed down, we begun to understand him and he understood us. Eventually, his mates came and when midnight stroke the whole inn was sitting with us. It was a very pleasant evening, we laughed together, and learned a lot about the life of locals. A wife of one of men brought freshly baked cakes after pétanque match. The cakes were amazing. We continued in a friendly debate to early morning. I wouldn’t even believe we could find some many similar themes.

One of these theme were beauties of Slovenia and interesting sight around the town. Every one recommended us something different, however every one agrees that we need to visit Postojna Cave. We planned to go there on early morning. And if the weather allows us to do so, we would explore surroundings of the cave.

Why is Postojna Cave so interesting and why are Slovenians so proud of it you can read next week..