Published: 3.6.2010
Sokolia Valley is placed in west part of Slovak Paradise. Maybe, it is the most wildest and most remoted ravine of this national park. The valley is nearly 6 kilometres long and its exceeding makes more than 300 metres.

How to get to Sokolia Valley? You can reach it from Spišska Nová Ves and Smižany, via Čingov, or from the community of Dedinky. Local inhabitants name main part of this valley as Great Sokol, and lateral valley, which mouths there, is known as Small Sokol. Both valleys obtained its name according to bird of prey he nested in a lofty place in past. Except Small Sokol Valley (which is inaccessible from tourist point of view), you can find there another relatively big valley, reaching Lipovec plateau, and ramified Briestov Valley.

Lower part of Sokolia Valley could be overcome without great effort along well passable paths. Anyway, terrain character is changing dramatically in a place known as Kamenna vrata (Stony Gate). Here, the stone walls approach to each other in distance of one meter only.

Nevertheless, the passage of the valley is relatively difficult, passing along marked tourist trails and 80 metres long system of banks, ladders and foot-boards. Local Mountain Service put it there in 1956, till this time period, the valley had to be gone round by means of quite difficult crossing. Anyway, the top of your excursion could be a mounting in upper part of the valley, which has the name after Martin Roth, the discoverer. He made his first expedition to the valley. He tried to find there, with a group of his friends, to look for Alp cudweed, in August 1898. However, nobody knows if they found some sort of this plant, on the other hand, it is true, that they were the first persons, who went through the cleft.

Inside Sokolia Valley, there are hidden several waterfalls, such as Boční - Lateral w. (8 m), Skalní - Rock w. (3,5 m), Závojový - Curtain w. (75 m) and Vyšný - High waterfall (15,5 m).  The highest one Závojový (Curtain w.) is the highest waterfall of Slovak Paradise. The access section was arranged, so that you can approach comfortably the waterfall. 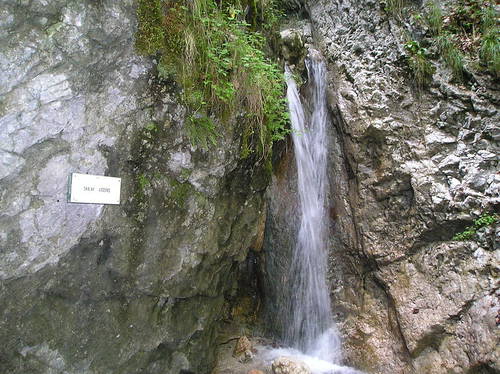 Sokolia Valley, similarly as the whole Slovak Paradise, is an area containing many protected animals. From more than 200 sorts of  vertebrates, just 130 sorts are protected. Nevertheless, many sorts of small insects are protected, too, such as butterfly red-eye. However, many sorts of animals were not managed to be saved. So, as an example, European rabbit, water beaver of forest aurochs were totally exterminated on Slovak paradise territory in past. Anyway, similarly, as valley name suggests, this area is, thanks to their favourable conditions, a refuge of best of pray birds. So, the bears, wolves, rynx or wild cats are living inside inaccessible parts of the valley, and several sorts of bats are hidden in the caves. However, to critically threatened sorts of local animals belong, for instance: lampreys, great salamanders, Carpathain salamanders, rock eagles, ground-squirrels, garden doormice, river otters and other.

The forests, interwoven with valleys and inaccessible clefts, are creating perfect conditions for maintaining of many threatened sorts of plants. Inside canyons and passes, there were preserved original mixed forests. So, in cold clefts, you can find yews (Taxus baccata). On rocks and cliffs, various warm-loving plants grow, inside abyss, you can find cold-loving sorts of plants.