en.infoglobe.cz » Spain, Girona – A Small Bonus on a Way to Barcelona

In the first place - because I'm not a big traveler - I was pleased to arrive at a small airport in Girona with one terminal. Soon I realized that my journey home will be stress-free at the airport, because I will not have to worry if I joined the right my flight (as it occasionally happens to me at major airports).

Another very pleasant surprise had been waiting for me on the second day of my short trip to Catalonia. Because my plane arrived to Girona in late night, I decided to stay over in a cozy hostel in the city center. On the following day I would set out to my final destination, Barcelona. Barcelona is less than 100 kilometers away from Girona. Yu can get to Barcelona by taking a bus at the airport or a train in the city center. 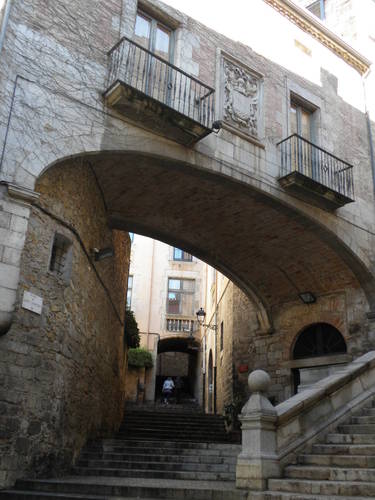 Painted houses on the riverbank

On the other day I took the opportunity to get to know Girona right in the morning. As soon as I walked into the streets, still little bit asleep, of a not very large city ( it only has around 100,000 inhabitants), the atmosphere of history washed over me. From the square, where my hostel was situated, one could see the towers of churches and a fortification wall. Suddenly, I realized that this town give me a wide range of monuments of different historical eras. While browsing one of more than ten bridges that are being built across the river Onyar , show me the magical image of colorful houses standing on the grounds directly in the water. Walk along the river led me to the bridge, which is not that romantic, but it is interesting since its architect is the Gustave Eiffel , who built it just before the construction of the Eiffel Tower in Paris. 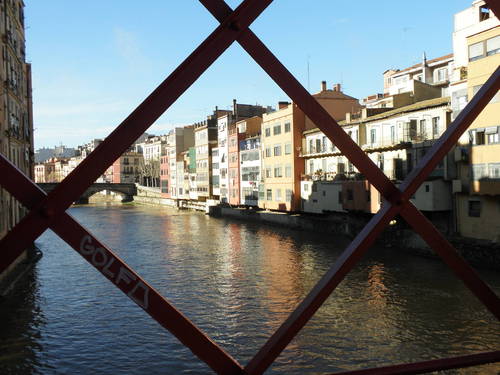 It was enough to move away a few steps from the river and suddenly I found myself in narrow streets with sidewalks paved with stone blocks. I've set myself a goal – the tower of the cathedral. I set out to the streets of Girona’s historic center. I was glad that I like sports. I was wearing comfortable shoes – a great choice for a walk in historical nooks of Girona. The construction of Força Vella stronghold traces back to the times of the Roman Empire. During the 14th and 15th centuries was extended by medieval city walls. Defensive walls built of large stone blocks, some of which remained until the present, protected the city. You can conveniently walk on the sidewalks that are on the fortification. If you make a stop in some of the towers, you can not only relax, but also enjoy the view of the city and the landscape from above. 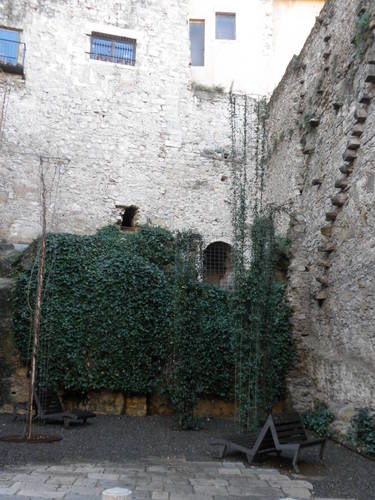 The most important churches

At the highest point, Força Vella, there is the Virgin Mary cathedral . Its construction began in the 11th century as a Roman style building. In the 13th century its construction continued in the Gothic style. It was finished in the 18th century. The cathedral is the widest one-navy cathedral in the world. It is 22,98 meters wide. 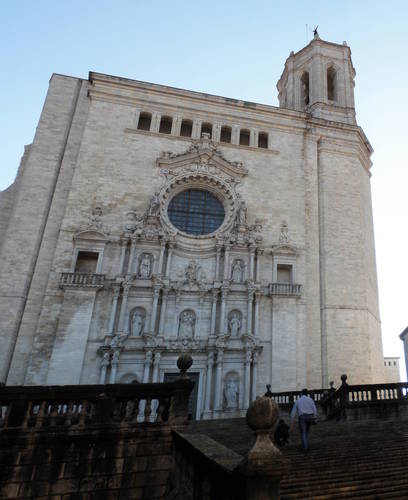 Another important building in Girona is Sant Feliu basilica . The cathedral was originally built in the 10th century. It was completed with a Gothic nave and a Baroque façade from the 13th to 18 century. One of the most representative buildings is completed particularly with Gothic bell towers from the 14th to 16th century.

Many interesting places on a small space

In the past, Girona had lively Jewish community which perished in 1492 when Jews were expelled from Catalonia. Today, tourists interested in the socio - cultural history, are attracted to see preserved Jewish ghetto in Girona and religious cemetery.

The city offers its visitors many landmarks that remained until the present. There are also many culture events and mainly a cool atmosphere of a small and historically precious town. Everyone can enjoy it with a cup of good coffee or delicious food. It is worth spending more than one day in Girona. Perhaps, those who randomly visit Girona on their way from another destinations in Catalonia, want to spend there more time exploring its nooks. As I did. 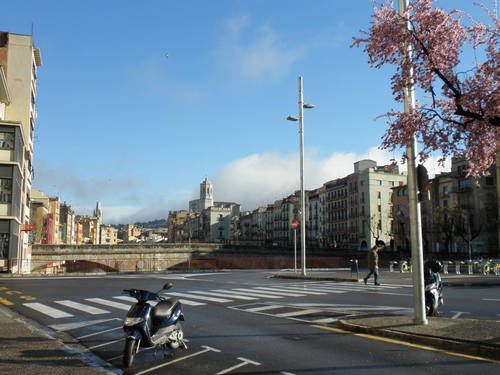 From Prague To Atlantic Coasts I.

Published: 13.11.2010
Two members of INFOGLOBE Team undertook an excursion to countries of Iberian Peninsula. Within next coming weeks, you can read our experience and impressions, have a look at the photos enclosed and, maybe, to get the inspiration, what to visit, etc.