Why and who actually was Milan Rastislav Štefánik, we will clarify at least briefly in today's short article. If you will go to the mound general M. R. Štefánik with young children, it is good to remember at least a few facts of his life to keep you honest child questions about this important scholars, world traveller, astronomer, General French Army, Slovak politician and diplomat caught unawares.

About General M. R. Štefánik everyone has heard, but I think that person who did so much for the nation, it deserves at least a few lines. In 1880, he was born in the village of Košariská in family of evangelical pastor and at the same time spirited patriots and sc

holar Paul Štefánik, and therefore was an early childhood surrounded by books. He was always one of the best students, so after a successful high school graduation in Prague started study civil engineering, but eventually Faculty of Arts, Charles University lured him. This school he successfully finished by doctoral work in astronomy. Long time he spent in France. He passed several study abroad stints and for less than a decade made astronomical observations all over the world. Till today, for example, in many classrooms on the bulletin board hanging sentence: "For people with hard resolve and perseverance is not impossibility," that M. R. Štefánik uttered when he joined the expedition to the observatory on Mont Blanc despite didn’t feel well. Teachers are repeated us many times, and it emphasized that if a person really wants and try to definitely reach his aim. In the French army, in which he enlisted in 1914, reached the rank of brigadier general. As an airman fought on the Serbian and the Western Front, but became famous thanks to the organization of the military weather services. Along with T. G. Masaryk and E. Beneš was founded in 1916 in Paris the Czechoslovak National Council.

Big effort he gave to the trying to create the Czechoslovak Legion, fighting on the side of the Agreement, which significantly contributed to the creation of an independent Czechoslovakia and became the first Czechoslovak Minister of War. On 4th of May 1919 near Ivanka close Bratislava tragically died when he came back home in the ruins of the aircraft together with two Italian pilots and one mechanic - radiotelephonist. This tragedy was not precisely investigated and never fully explained.

Till now however scientific, military or diplomatic merit of General M. R. Štefánik many museums or monuments remind that have been discovered not only in the Slovak Republic - in his native country, but also in the world. After Štefánik are named many streets, squares and even the biggest Slovak airport (Bratislava M. R. Štefánik Airport). As well as marked tourist route No. 0701 leading from Děvín to Bradlo has his name (Štefánikova artery). Since he was an accomplished astronomer, it is no wonder that after MR Stefanik is also named asteroid - 3571 Milanštefánik discovered by Anthony Mrkos in the Bohemian Kleť in 1982. These sorts of examples we can mention many more, really. 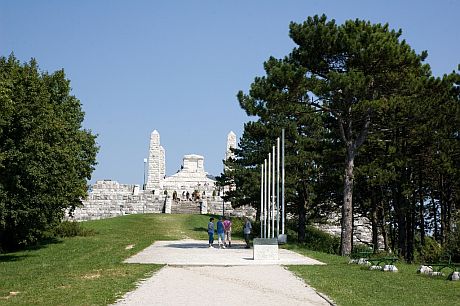 To the most popular and also the most beautiful places of remembrance is clearly "his" Mound on Bradlo. Where you can find it, how to get here and what interesting you can visit in the neighbourhood, if I go here on a trip, you can read in a week.