Despite the fact that at the beginning of September, the first ground frost sometimes appears in the morning, during a day a temperature gets quite high. Longer time, we had no time to go somewhere to the nature and because we meteorologists predicted for the weekend really nice weather, we opened the map and looking for something where we can direct our steps. I'm still not fully fit after a recent injury, so the condition was that the finish of the trip could be conveniently reached by car, but we can at least enjoy a bit of nature. Mound of General M. R. Štefánik fills all of this and offered us something extra - a wonderful view to the surrounding landscape, but also reminded us of a piece of history, which we have forgot a bit since school days. 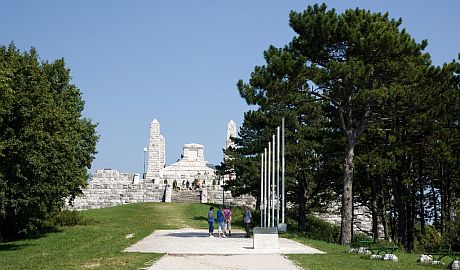 How to get there

In the southern part of Myjavské hills above the road connecting the city of Brezová pod Bradlom with the village of Košariská on the top Bradla (543 m a. s. l.) the mound of General Milan Rastislav Štefánik proudly erected. If you head this way by car, you can park in the paid parking lot almost to the mound, just as he cast into the GPS coordinates 48 ° 40'46 .98 "N, 17 ° 33'34 .61" E. From there, just few steps and you are standing next the mound.

Relatively narrow road is maintained throughout all year, so it's no problem passable in winter. Be careful especially to cyclists who ride bikes bloody fast down from Bars. Right at the parking you will find little information stall with souvenirs and promotional materials. If you're more of a believer in healthy walks and the nearby town Brezová pod Bradlom, as well as the adjacent village of Košariská, to get on the marked hiking trails. To the mound a marked bicycle path leads too. So it's up to you for which way you choose. Nature is really beautiful here, especially now in the autumn, when everything starts to revel with colours.

Mound of General M. R. Štefánik was built on a dominant peak of Bradlo, which rises above his native village Košariská. It stands in the same place where Štefánik wa

s buried together with its Italian crew week after the tragic death. Five years later, the foundation stone of the memorial puts down, which was designed by his personal friend of the architect Dušan Jurkovič. Mound of General M. R. Štefánik, which is considered a masterpiece of visual art in the whole of Central Europe, was unveiled in 1928 to mark the 10th anniversary of the Czechoslovak Republic. Mound is built from the Slovak national stone - white travertine blocks, has a rectangular shape, it is formed by cascading two floors which are linked together with staircases. The tomb is located at the top of the central part of the mound and in every corner to the sky rise about 12 meters high obelisk. From the whole monument is a beautiful panoramic view of the "kopaničiarský" region. 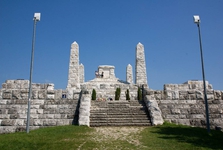 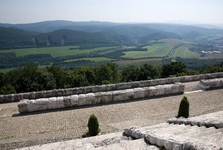 In the footsteps of Štefánik

Milan Rastislav Štefánik was one of the true personalities of our history and because the mound stands in his native country, in its vicinity is no shortage of places that are closely linked with him. If you take your kids, they will surely prefer this trip that the history books about Štefánik. In his native village of Košariská you can visit an evangelical church from 1878, where Štefánik was not only baptized, but on the same day of his funeral was held here the last farewell. Birthplace of M. R. Štefánik, located in the former Evangelical parsonage, now serves as a museum.

In the village is also a National House of Štefánik of 1935, Jubilee School – M. R. Štefánik school from 1928 or cemetery, where are buried his parents and several siblings. In the neighbouring village of Propastná is for Štefánik dedicated a memorial. Neither Myjava - region town of this peculiar "kopaničiarské" area not forget for him. In his memory was built monument M. R. Štefánik, the railway station, while you can see a miniature mound on parallel bars and if you really want to go into detail, definitely we can´t forget the Museum of the Slovak National Councils. And finally, even the city of Brezová pod Bradlom won´t forget for important countryman. There is a bronze relief and the National House of Štefánik of 1925 too.