The majestic castle of Beckov, which was founded in the 13th century, it remains only a ruin. But not just anyone. Magnificent castle ruins of Beckov, which proudly erect on a cliff up to 60 meters high above the village, surely notice anyone who goes through the valley around Váh river. It is situated near the highway D1. Today, it forms a very aesthetic, even from a distance well visible and with short way to the top, available dominant of Central Považí. But let's go gradually and at least by one eye look back to history. 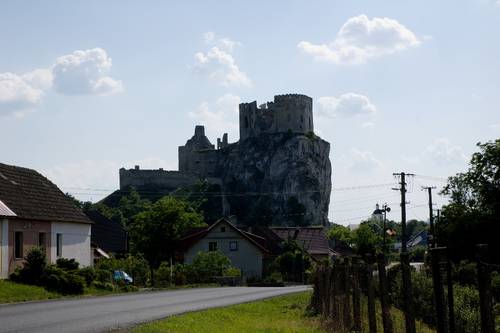 The jump into the past

According to archaeological research, the area of today Beckov was already inhabited in the Paleolithic age. Later, during the time of Great Moravian Empire (9th-10th century

AD), founded on a steep cliff on the left bank of the river Váh torrential natural fortification with a wooden palisade wall on the top, which served as a patrols habitat, guarding the trade route leading up cross Považí. The first written mention about the castle of Beckov dates back to 1208, when as Castrum Blundix, a Castle of maze, says in a document about Nitra personality Thomas. Although the name of the castle changed many times, the castle had already named Beckov. The stone castle built to defend the northwestern border of the Hungarian kingdom, was probably built in the middle of 13th century. It is interesting that neither Tatars not even Turks, ever managed to conquer the castle. Until fire destroyed it in 1729, which engulfed the roof and interior of the castle and from the hard blows of fate never recovered. Till today it is only preserved as ruins, where is still something to admire. Beckov Castle in 1970 thanks to its historical and cultural value became a National Cultural Monument. 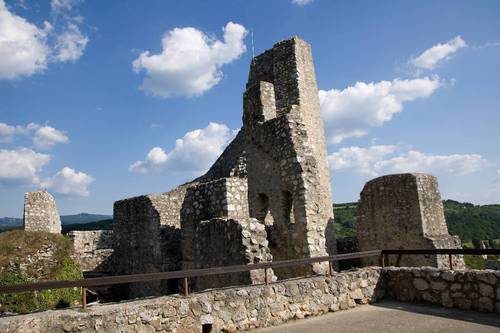 What does the legend say?

Same as every castle has own legend, also the castle of Beckov has a several of them. The famous story is about castle mimic Beck. According to it, castle was built by the duke Stibor thanks to his mimic speech. He proved he was the only cheer when he lay exhausted and destroyed after a long hunt near the cliff. Then the prince in a good mood Stibor mimic promised to meet him all about what you just ask. To the surprise of a clown like Beck proudly own castle towering into the sky on a nearby rock. Stibor Prince was an honest man, and thus the word and respected the castle built. He, however, he liked so much that he did not want to give up. Jester offered for him as much gold, how much he weighs. He agreed, but with one condition, the castle will be named same as him. And so the castle was named Beckov.

Ruin in a new guise

Ruins of Beckov belong to the most impressive sights on Slovakia. They are searched not only by visitors from Slovakia, but also from more distant parts of Europe, or even from overseas. The gates at the beginning of this year's main season opened after few years break. It took place here the first comprehensive reconstruction phase, which was financed from EU funds from the state budget, from municipal coffers Beck, from funds of the Professional Association "Beckov Castle." As a result, in a relatively short time managed to partially reconstruct the chapel for example, to create the museum's courtyard with an amphitheater and much more. Today, visitors can in addition to learning about the history of the castle offers direct outdoor cinema, or some of the many events that are regularly held here, to experience medieval warriors fight, to taste contemporary cuisine, admire the work of skilled craftsmen, or just relax in the shade of the mighty castle walls .

For calendar of events and summer theater program - click HERE. 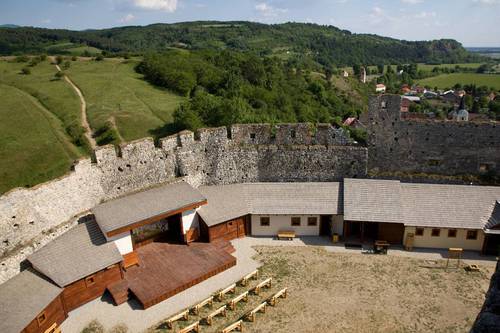 If everything goes as planned, so in 2013 will count with permanent exhibition, focusing on detailed mapping of the history of castle Beckov. Also for next year is in the national cultural monuments, ruins Beckov planned implementation botanical gardens, focused on growing herbs and spices, which were typical for the region of nature and local people took them as early as the Middle Ages. Since I belong to lovers of home cooking herbs and my heart are the issues now look forward to our future of this interesting visit to the castle.

If you do not have plans at the last summer days, or you are thinking about a nice family trip, so I can only recommend the visit the ruins of Beckov. Not only that this place your kids make tired, because for them it will be a trip to the fairy tale, but you can certainly relax here and at least for a moment forget the worries of everyday life.