The church is one of the most important artistic manifestations Slovak wooden church architecture. Till today only five such church remained, with original look and witnessed the Reformation in the Slovak Republic. So let's take first things first. In 1610, after the big boom occurred in Liptov evangelization called recatholisation - cruel oppression of non-Catholic churches, which then in 1678 sparked a great uprising of Kuruc.  Later was result in legal resolution about returning churches confiscated original parish, but with assuming that the church premises was not Catholic consecrated, and thereby transform the 888 buildings protestant not recovered neither, but allow build at least 38 worshipers in 11 thrones of the former Empire. 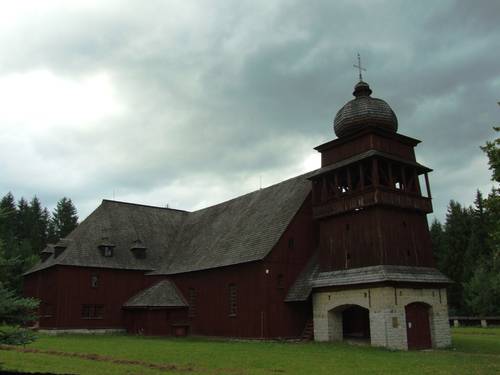 Win but it was not at all. Regulations for the construction of worshipers were mainly developed and interpreted against evangelist so that the works of Protestant church buildings were the least durable and conversely the most remote and inaccessible for ordinary people. Worshipers had to be built outside of the village, was not allowed to be used for building stone, at the time of the foundation of all masonry techniques, so no other choice than to use wood. These wooden objects were not allowed to have a tower or bells and the entrance had to be turned away from the road. Based on these Articles of Šopron (rules) they fit into history as articular churches. Of course, with the passage of time, the rules have changed in favour of the Protestant churches.

In the above-mentioned Liptov was established two articular churches. One in Hybiach, which was destroyed by fire, and the other in Paludza. The right kind of appointed was renovated and enlarged by additions. It was built mainly zručnýma and skillful hands, the carpenter Joseph Lang, who use no projects because they could not write or read. He relied only on experience and skills. After centuries of standing had to be dismantled in 1974 and newly renovated in connection with the construction of the dam Liptovská Mara. He found his home in the former territory, in the village of Holy Cross. Here preserve the authenticity of the original environment of exceptional construction. In 1982 he was re-consecrated in the presence of 10 thousand people from all over Slovakia.

The Church is the dominant 19-meter high wooden tower served as a bell tower, whose bells

were during the 1st World War melted down and used for military purposes. In the years 1922 - 1924 the bells were installed with the names Faith, Hope and Love. Floor plan is in the form of a cross. Length of the church and the tower reaches 43 meters. Built up area is 658 m2. The church has 72 windows and 12 doors. Capacity is up to a whopping 6 thousand visitors.

The church is accessible all year to the public with guides. Input a voluntary contribution used to running and maintenance of the articular unique wooden object. Outside the church is a parking and leads to him and marked trail. In addition to articular church in the Holy Cross is more similar buildings located in communities Istebna, Kežmarok Hronsek and Leštiny. These churches might not be quite so old (16th century) as known cathedrals, but their interesting sometimes cruel history puts you in charge and conquer.