We went on and learned it is the House of the Region . This building rebuilt to Art Noveau style is the residence of the Region of Nitra. Once, famous Slovak writer Janko Jesenský held the office there, today a memorial board reminds of that. Inside we would find even the Nitran Gallery established in 1965. Except for exhibitions there are various events all year long. The building was built on the edge of Botton and Upper Town in 1823. It served as Baroque palace structure. If we take a deeper look in the history of the city, the House of the Region stands on the place where former fortification used to be, locals call it Palánok. It is a tall foritification wall built towards the end of the 16th century from the times of wars against the Turks. It is easy to see as it stands right from the House of the Regions, right at castle stairs. There is even a statue of St John of Nepomuk. 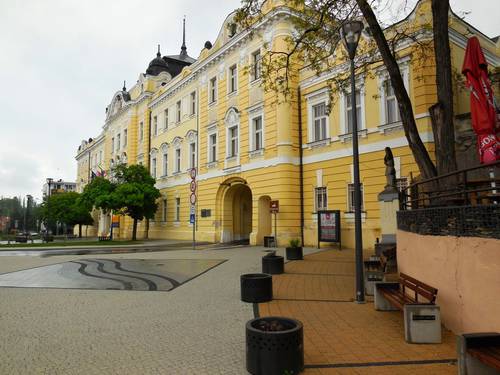 As we have mentioned stairs, we can use them to get to Nitran Castle ,. There is even an entrance gate, or rather a zebra spilt for pedestrians and automobiles. This time, we had not any doubts that we had reached the castle. The castle together with Slovakia’s largest fortified settlement and the Upper Town have been city historical reservation since 1981.

Before we entered it, we were interested in a square of cobblestones through which came waves. As we had learned later, it was a branch of the Nitra River . It flew there until the beginning of the 20th century and flew around the castle hill, and made natural island. This branch of the river was called Nitricka. We were pleasantly surprised as right there the lowest and the warmest place in the city is. Perhaps that’s why locals call it “Riviera”. Opposite to the House of Regions is located a roundabout, public toilets, historical, modern, and socialist structures. 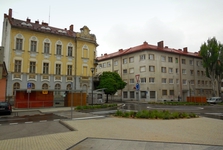 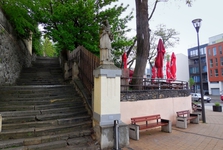 There was nothing to wait for. We stepped inside. Two routes were there to choose from – the Royal and Samo’s. We decided for the second one named after the ruler of the first state of the Western Slavs, the so called Samo Realm that existed between the years 628 and 658. 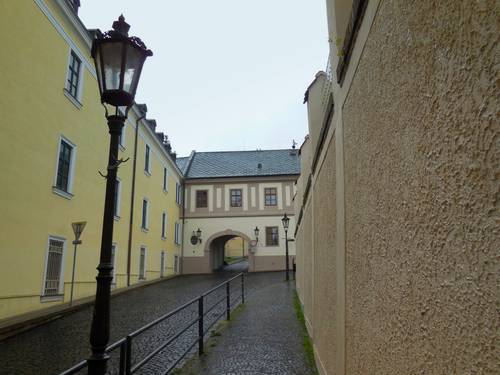 The trail was lined with town houses. Right at the beginning, - Franciscan Church of St Peter and Paul with a monastery. This originaly Renaissance structure had had a Baroque reconstruction. The church is decorated with stone relief and to its side there is a small baroque calvary. We cannot describe it from inside as it was closed. 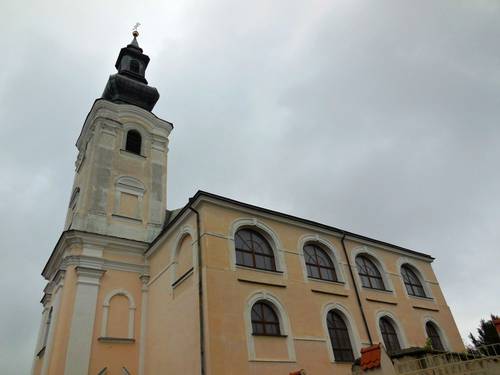 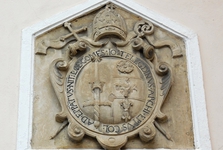 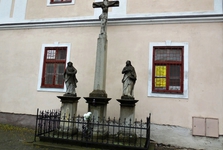 Soon the narrow path change into large square lined with different buildings and a park in the middle. In the center of the park, there is a monumental 6.6 meter high statue of Prince Pribina, the first documented ruler of direct ancestors of Slovakians. The square bears his name. It emerged after partial demolition of the Upper City. At the moments of our hike, we thought we are not in Nitra, but at Hradcany, Prague. It was really nice there, no rush whatsoever. We could say it was very peaceful there. 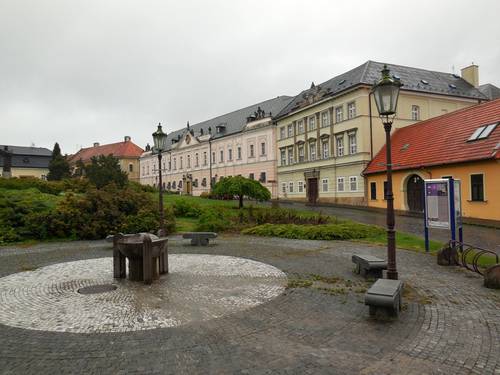 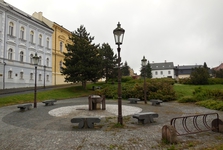 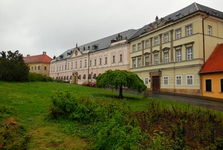 All structures on the square are marked with tables telling stories on the history of Nitra. Lets mention some. We were interested in the building of Large Seminary built in stages. This resulted in combined Roccoco/Neoclassicist façade. A Neorenaissance chapel is part of the building. Moreover, there is a Diocese library with precious Slovak historical literature. Altogether, the library holds 65 thousand items. The structure of Lesser Seminary is also very interesting, or Kluch’s Palace located in the upper part of the square. Its corner is supported by the symbol of Nitra - Corgon. 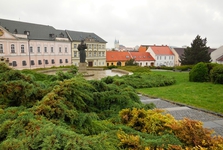 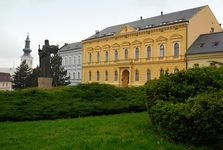 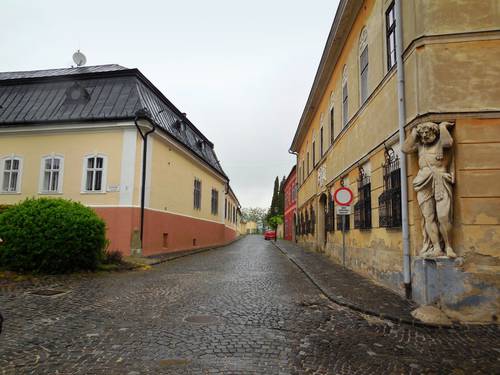 On Corgon and his journey to the castle itself you will learn more next week.