en.infoglobe.cz » SR: Suchá Belá – The Most Romantic Gorge In Slovakia

SR: Suchá Belá – The Most Romantic Gorge In Slovakia

Published: 12.7.2012
In the eastern Slovak in Spiš area is one of the most beautiful mountain ranges - Slovak Paradise, which since 1988 declared as a National Park. In the rugged area laced with ravines, streams and waterfalls are hidden gorge, which is really worth seeing.

his gorge is Suchá (dry) Belá. These gorges of the most visited Slovak Republic, not only because of its natural beauty, but also because of her romantic extraordinary that can enchant many tourists. When you climb up, man overcomes 400 high meters, and he won´t realise it. It is due to a natural rock features such as windows, window-Basin waterfalls or waterfall to attract to themselves all the attention and fatigue caused by the output has no chance. Come with us to know this coveted corner of Slovakia.

The entrance to the National Park of Slovak Paradise, in particular to Suchá Belá gorge is part of the local part of Hrabušice - Podlesok. In this start and also finish point is camping, large car park, bus stop, and season with refreshments and buffets. From here begins our fairly challenging hike. From the signpost before a reception camp we continue to gorge on the green trail. The path runs along the camp fence, then descends to the stream and continues through the forest. The pavement is guided by wooden walkways alternately on both sides of the creek and stream up the gorge below the Falls Basin. From this point you go on ladders or exposed to hold chains. After a few steps you will see narrowest place of gorge, the rocky gorge or window. When you go over, you will get also over the waterfall window and after on a more extended part of Korytový waterfall.

We continue along the side waterfall to the Cascades and then steeply up to a wooded stream. After we get the end of the gorge rises at the spring on a narrow asphalt road. The entire output finally ends at the edge of a significant plateau Glace. From here, the forest road marked with a yellow tourist sign to the intersection under the bird hump. Here we meet the road and continue along the red trail. Forest path gradually decreases and leads us to a famous historical and recreational area Kláštorisko. 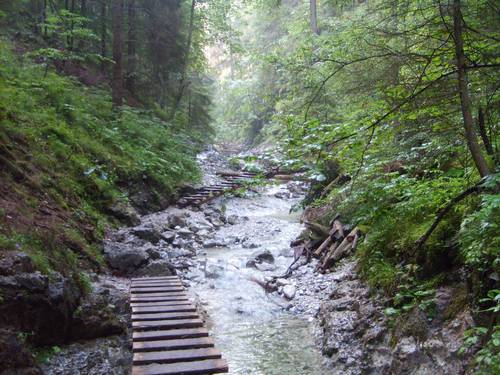 During the descent from Suchá Belá we came to the ruins of a former monastery, which in the past provided a refuge from the enemies of the people living in surrounding villages, and thus no coincidence that this location was called the Rock of Refuge. From here also the name itself Kláštorisko came. In 1299 Carthusian, who lived here while it expanded in 1330 by the church founded the monastery. The monastery was burned and later in the 15th century chapel was built here. Since then the monastery fell into disrepair and still we remained only the destroyed walls, but thanks to the volunteers gradually recovers and becomes the initial appearance.

Keep walking on our way

After we could learn something from the history of this popular stopping place, we continue the journey in a northwesterly direction along the green trail. After the spilled stones way across the field, go down to the crossroads under Kláštorisko forest roads and turn right onto the sidewalk. The path leads through the forest along the green trail, at the end of the resort next to the crossroads Hornád throat. We continue

the blue mark on the pavement next to the creek, and later paved the way to the camping village Podlesok. There, our tour of the beautiful but physically demanding four and a half hours ends.

Suchá Belá is the right place for a family outing. Despite the fact you will spend lots of time there and the way is difficult to walk, it is fine even for children or older people. And why is actually Suchá Belá called dry? Description of this ravine is justified on the dry bottom of the gorge, where flowing stream has been lost in the dive.