Castle of Děvín belongs to the oldest Slovak castles. In historical sources, it is mentioned, under name of  Dowina, just from times of Great Moravia. The castle is spreaded along interesting and strategic places, from ancient times – i.e. along powerful rocky cliff, above confluence of Morava and Danube rivers. Together with the neighbouring Austrian Castle of Hainburg, Děvín controlled so called Danube Gate, where this Central European river soaks through Small Carpathian Mountains Range. It is obvious that this rocky cliff was discovered by Roman Legions. They had their camp (Limes Romanus Protective Wall – Carnuntum), along opposite Danubian bank. 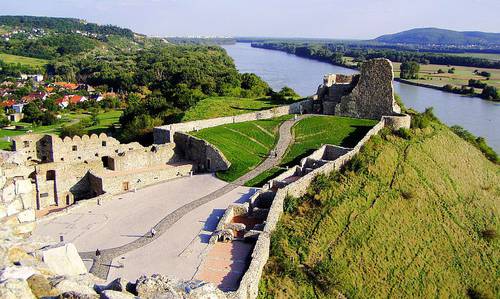 According to the archaeological excavations, reminding marked groundplans of buildings,

perished long ago, including small church of Romanesque style, a fortificated stronghold was located there, in the course of Great Moravia time period. Later, during medioeval period, this castle fortification as well as upper section of the castle, were spreaded into actual dimensions. Rastislav, a legendary Prince, was settled here allegedly. He defended himself against attacks of Frank military troops. Nevertheless, King Premysl Ottokar II. Iron and Golden King, became evidently as his Master (he lost his life in 1278, during Moravian Field battle, approx. forty kilometres distant from there, against stream of Morava-river). On the other hand, Palffy and Bathory Parentages, powerful aristocrat families, ruled from there over ther territory of today´s West Slovakia.
However, when Turks´ threat was over, the castle started to become deserted, and finally, its destruction was terminated with attacks of Napoleon military troops at the begin

Anyway, shortly afterthat, the ruins were popular and very often visited locality, first of all, by merit of young Štur well-wishers. They started, with their group, mounting to Děvín-top in 1836, during the era of so called National Revival Movement. At the end of 19th century, they erected on the top of upper castle, (within scope of Thousand Years Anniversary Cele

bration of Hungarian Kingdom), a symbolic obelisk. However, this stone was destructed by legionaries shortly after the birth of independent Czechoslovakia. Later, a nature amphitheatre, with a stage, on roof of (at present) dilapidated weekend pub, along a slope below the castle. Within 1990-1995, upper section of the castle was - for short time period - open for public, with exposition, regarding castle history, in arranged rocky cave. The climbing along preserved torso of stone stages, added partially with steel sta

ges above precipice, was rather difficult, but, as a reward for such execution, it was unique panorama outlook around, especially to Austrian and Moravian parts of Danube-river, Schlosshof Castle, and even towers of Vienna or Alps outlines in the horizon, under favourable weather conditions. However, from the reasons of in-stability of this rocky cliff (it is dilapidated subsequently), this most attractive castle section was closed for public. Now, it is unknown if and when the upper part of the castle will be accessible for public again.

As a symbol of Devin Castle, it is so called Panenská Veža (Virgin Tower), however, inaccessible for tourists as well. The name is derived from the legend, when poor knight fell in love with high-born noble-woman, whereas her family did not agreed with the marriage. Such pretty bride escaped with her darling in Děvín Castle, and here a secret wedding was effected. However, during their wedding day, persecuting soldiers caught them, found the lovers in smallest tower above the cliff, the knight was unable to protect such superiority, and the bride junped from the rock into the river.

At present, the castle area is in administration of Bratsilava Museum. This institute continues in archaeological investigations, arranging subsequently all sections. In past, the castle was equipped with several gates. At present, it is main entry from parking, at the end of Devin community. In the future, even a gate from Danube-landing place or from the village could be open. In main courtyard of lower castle section, where a well, more than 50 metres deep, is to be found. In

rests of Renaissance Palace, you can visit exhibition spaces, where souvenir shop is settled. Extend grassy area is a pleasant place for relax all year round, and you can enjoy from here wonderful outloo to Danube-river, its Austrian bank from one part, and majestic mountaneous massif of Devinska Kobyla, with Devín community and gardens along its slope,  from the other side. In summer, excusrion ships from Bratislava arrive close to Devin Castle. On the other hand, all year round, the castle is accessible by regural bus traffic (bus No. 29 from Nový most). 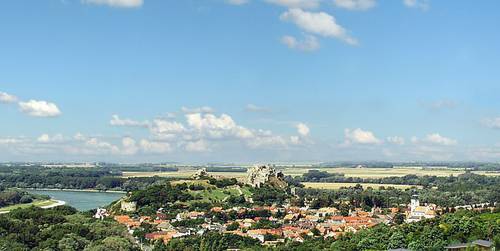