Within 1935-1938, in Petržalka, Bratislava outskirts, there was constructed defensive fortification which would become a part of planned defensive belt around borders of former Czechoslovak Republic, in accordance with Maginote line. This fortificate

However, at the end of 1938, all constructions were released (without any struggle) to German Army, on base of Munich Treaty. Adolf Hitler personally arrived there shortly afterthat, in order to have a look at it. When the 2nd World War was over, a part of such fortifications was left inside strictly guarded military border belt, inaccessible for public, some constructions were destroyed during building works at construction of new dwelling houses and highways.

Anyway, a destruction waited also for bunkers which were preserved in forbidden frontier belt,

as they were, after fall of „Iron Curtain“ plundered and devastated. So, the rescue of the biggest one was succeded by means of enthusiastic group of persons from civic assotiation „Let´s  Save Petržalka Bunkers!“. As a result, the new improvised museum was open for public in 2009.

The visitors can reach it, following Kopčany way, from terminus bus-stop, in direction to Austrian border, direction Kittsee. Passing highway overbridge, you go by bunker No. 9 (with concrete chimney), turning to the right towards the first asphalted way which served in past for quick move of frontier-guards vehicles, along small forest (where the second, similar way is leading) - this turns aside Austrian inland.

Between both ways, there were preserved several pillars, paying attention to frontier area. After approx. one kilometer, this way turns to the right, towards renewed military cemetery from the 1st World War, hidden in grove, where great white cross is shining through. The whole section could be driven by car, with the exception of last part, closely the cemetery, leads across a field, so that it is, in spring or after heavy rains, hardly passable.

Czechoslovak State Mark (Coat of Arms) from the 1st Republic time period, placed at column, as well as the imitations of wire and against-tanks barriers indicate that immediately after winding, the target of our trip is placed - it is former leader bunker BS 8, known as „The Cemetery“. This bunker was destined for thirty soldiers. They were able to defend the Republic, from this hiding-place, for longer period. The bunker was equipped with two armer-plated towers, including own electro-aggregate, well, outfit (equipments) ready for air-filtration and, of course, with guns and loopholes for light weapons.

Great part of original equipments, which could be dismounted, is irretrievably away but some

museums, Military Historical Institute or individuals helped these enthusiasts, giving or leasing some subjects to them. Inside separate rooms, in two floors, (the upper was fighting room, the lower was reserved for accommodation space), you can admire the exposition, specialized for the history and purpose of defensive fortification in Petržalka, including memorable events from November 1989, when the Iron Curtain broke

down. In another room, there is a collection ov various subjects, connected with army (military) themes and a separate section, including models of ammunition which is dedicated for youth education in front of occasionally findings of pyrotechnical subjects.

Nevertheless, the visit of such type of bunker is, no doubt, an experience, first of all for families with children. It is a pity that the environs of such historical monument is disfigured with immense rubbish dumping place. During summer saison - i.e. since April till the end of October - the bunker is open each day in the afternoon, within winter months, on weekends or on base of advanced order. The entry fee is voluntary. 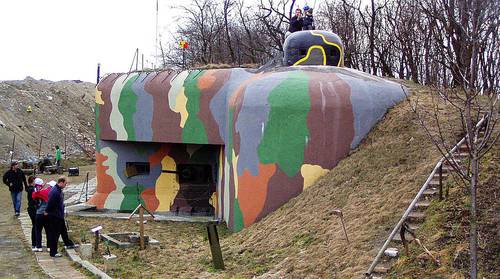 Do You Know That? Secret Military Object In Prague

Published: 20.11.2011
Probably few people think that during a Sunday walk in one of Prague's picturesque valleys you can found in the vicinity of one of the most secret military space ČR.