It is a fact that Kriváň does not belong to twenty highest peaks of Slovakia (it takes even the 27th place of all Slovakian mountain peaks). On the other hand, its magic silhouette, with striking curved top (its name is derived from the word „krivý“ = curved) drew an attention of poets, painters as well as standard people from times immemorial. So, Kriváň is literally ensnared with stories and legends. In past, this peak became a symbol of strengthening national pride and identity, however, sometimes misused for negative way of political targets. Its powerful shield was a symbol os Slovak national subconciousness. As a consequenece, it was decided in 2005, that Kriváň-Peak will be pictured even on back side of Slovak EUR - coins, with its nominal value of 1, 2 and 5 EUR-cents. Thanks to this fact, this Slovak-dominanta could be seen daily - it is sufficient to open your purse - nevertheless, this picture could be seen everywhere in the world, where these EUR-coins are to be paid for.

Kriváň Peak cannot be mixed up with any other mountain top

If you travel along North Highway from  West to the East  Slovakia, it is impossible to miss such picture or even change with another Tatra peak. Kriváň is the western top and can be seen (watched) just from Liptovský Mikuláš. From this part, it is, according to affirmations of many admirers, most beautiful view. The photos of Kriváň, made in our article, were obtained in the village of Pribylina, where we had, (during our routine journey from West to East Slovakia), severa

l hours´ stop, in order to visit very nice nature skansen - Liptov Village Museum. Kriváň, arising in west section of High Tatra Mountains, at the end of long range of Kriváň „razsocha“ (fork), running from main range of High Tatra Mountains from Cubrina, was, is and will be looked for with all lovers of mountain tourist walks. From its peak, several other ranges are diverging in fanshaped way, nevertheless, for tourist walkings, there are important mainly two ranges, i.e. south and south-west range. The south one is running across Daxner Col, and Small Kriváň, is enlarged, establishing wide range, terminating Nad Pavlovou Hill. On the other hand, south-west branch is running throughout two apparent elevations - i.e. Upper and Lower Priehyba - up to afforested Grunik. Even now, some visible traces after mining from 15th-18th centuries could be found at south and south-west slopes of Kriváň. Further, from Kriváň top you can fully enjoy unrepeatable wonderful panoramatic outlook towards west part of Slovak and Polish Tatra Mountains and towards Liptov Valley. 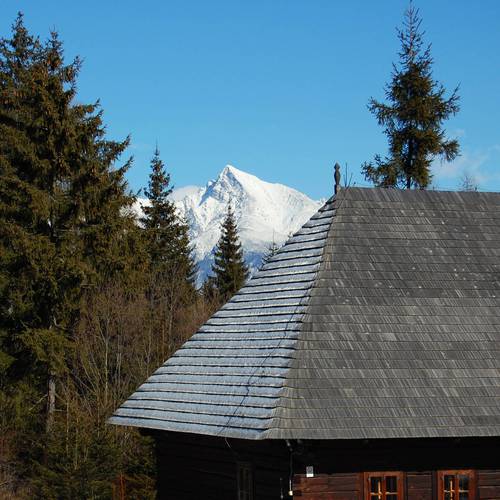 Several unknown miners, as the first persons, climbed probably to mountain top. Nevertheless, as the first, written documented climb, was undertaken in 1772 by Jonas Andrew Cirbesa, evangelic preacher and naturalist from Spišská Nová Ves, together with his friends. As the first written documented winter climb was effected on 1884, participated by T. Wundt and leader J. Horvay. During long history of tourist tours in High Tatra Mountains, Kriváň Peak was visited by many important personalities, such as naturalists, scientists, or even statesmen and politicians. As a memory of climbing of Frederick August II. (1840), the Hungarian monarchists erected an obelisk on the shield, however, it was destructed shorter afterthat by Slovak patriots, the participants of so called „national walkings“. Anyway, the idea of climbings´ organization to Kriváň, within scope of national spirit, as an expression of freedom symbol and national -liberation struggle, was brought by Caspar Fejerpataky-Belopotocky, Slovak writer and editor. He climbed there, with his six friends, for the first time, on 24th September 1834. Nevertheless, the tradition of so called „National Climbings“ was fully developped just since 16th August 1841, when the peak of Kriváň was „conquested“ by Caspar Fejerpataky-Belopotocky, together with Louis Štur, Joseph Miloslav Hurban, Michael Miloslav Hodza, Sam Bohdan Hrobon and other „nationalists“. The biggest national pilgrimage (which was literally of national character), was organized by Stephen Marko Daxner, on occasion of the acceptance of „Slovak National Memorandum“ in 1861. So, since 1955, traditional climbings up to Kriváň Peak are organized regularly, dedicated to memory of Slovak National Uprising as well as their heroes in Kriváň Area. Separate annual courses are joined, in symbolic way, always to certain anniversary of some important event from the history or some jubilee of some Slovak patriots. 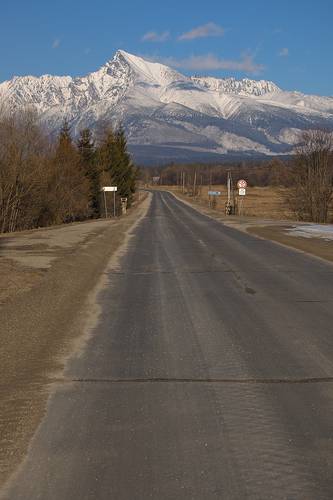 If you decide to conquest such marvellous Tatra Peak, you need to reserve the whole day for it It is rather difficult mountain climbing tour, including hard ascent as well as descent. A locality, known as Tri studničky (Three Small Wells - 1141 m) is most frequent starting point for your tour. Caution: during your climbing, you have to exceed the altitude of 1354 metres! At crossroads, close to old TANAP gamekeeper´s house, you are recommended to follow green marked tourist trail, leading up through winding paths across afforested slope of Grunik Hill. Further, the route continues via Kosodrevina, and at Priehyba, the path is turning to Kriváň žlab (Kriváň Channel), joining blue marked tourist trail at its upper section. This trail leads the tourists from Jamsle Lake up to Kriváň top. Provided you manage to overcome all barriers, you will be enthusiastic with marvellous outlook to any world part. As far as descent path is concerned, you can choose the same route or another from the offer of marked paths. But attention: you are always obliged to follow marked tourist trails only!

The second, extraordinary popular tourist trail, leading up to the top of majestic Kriváň Peak, starts from Štrbské Pleso, close to Solisko healing house. Anyway, during such climbing, the tourist would take into consideration the altitude exceed of 1285 metres. Even in this case, it is again very difficult climbing of mountain character, where you are not permitted to leave market tourist trails (paths), from safety point of view. So, from Solisko, you follow red marked tourist path, moderately mounting, you reach cross-road Pod Furkotskou dolinou (Furkot Valley), continuing ahead, below Sedielkova kopa range. At next cross-roads, the path continues, following red marked tourist trail, but, later after couple of minutes, you would turn to the right (it is worth to continue your walk a bit of metres ahead to Jamske Lake, it is really an attractive section) and continue along blue marked trail, leading efficient tourist finally to Kriváň Peak.

Published: 30.5.2013
In Stary Smokovec in the High Tatras there was ceremonial opening of the Alpine Clubhouse in the beginning of May. It is a great place for everyone who likes being in mountains. The Clubhouse interconnects relaxation, knowledge and services not only for mountaineers.

Published: 20.5.2010
This National Nature Reservation is situated in north part of High Tatra Mountains inside land-register of the community of Tatranska Javorina, Prešov Region. The valley is 13 kms long, with many great adjoining valleys, and it is the longest one in High Tatra.