Find the centre can sometimes be a real problem. Not everything is so clear, as we were once taught in school mathematics on the clock. Much less than when we talk about the geographical center of Europe, where it also comes into play politics, money, but fortunately for us, Slovaks, and common sense. We explore the normal map, because somehow it seems natural that the centre of Europe could be just the Slovak Republic.

Most of the alleged centres of Europe are not based on precise calculations that would justify the boast of this honour. Unfortunately, not ours, Slovak, which is found in Kremnica hills north of the historic town of Kremnica, is not based on strong arguments based on complex measurements. What is certain is that as the symbolic centre of Europe in historical sources already mentioned in the 18th century and so it is safe to say at least that is one of the oldest.

In 1989 as the official centre of Europe was recognized point located near the town in Lithuania Bernotai. This is one of the most remote, but the most likely centres of the Old Continent, because it is one of the few really well-founded professional studies. On the basis of geography and borders centre of gravity was calculated by scientist from the French National Geographical Institute, Jean-George Affholder. As the only centre that is also officially entered into the Guinness Book of Records. 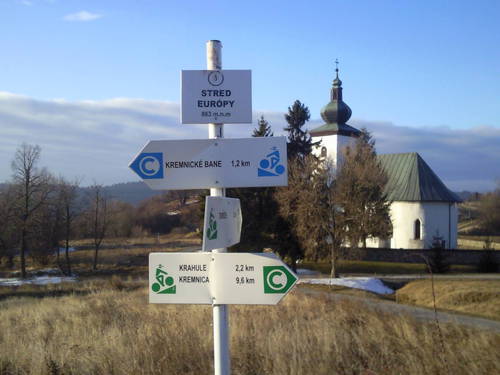 If we can´t be the navel of the world, let's be at least the heart of Europe

But let's go back to Slovakia. On the main road from Kremnica to Martin, the Janský hill between the villages Kremnické Bane and Krahule, was in the middle of meadows and fields built Gothic church of St. John the Baptist, who served the faithful of the five surrounding villages. Today I notice boards on a granite boulder lie next to the church highlights the fact that you are in the geographical centre of Europe. In addition, the monument also commemorates the major historical milestones of the Slovak Republic. When we meet here, surely we should at least give the effort that we went through a nearby meadow hill, from which we offer a wonderful panoramic view. From here we can admire Kunešovská plain, Flochová - the highest mountain of Kremnica Hills (1317 m), or a water tank Turček.

You can drive the car to the church. But what kind of tourists we would be, if would just drive everywhere. Much more beautiful memories you will get, if you choose to visit the centre of Europe as a tourist destination by walk. From the historical town of Kremnica it is possible to get there by two hiking trails. The first leads through the forest on the western side of the valley, while the route runs parallel cognitive walkway that connects the interesting memories of the glorious past gold mining Kremnica. The second, slightly longer and slightly more strenuous climb awaits us if we go the other side of the valley. Tourist route appears on the hill and passes Krahulčí and distinctive mountain village Krahule. On this sidewalk, you can better see fantastic views of the surrounding countryside.