nd in north -west part of Slovakia, in Žilina Region.

Really beautiful square attracts, from the first view, the attention of each visitor. Wooden construction with timepiece, mentioned above, dominates the square. The complex is placed on frontal facade of the House of Culture. The composition of this work presents sitting Madonna, Sevenfold Mater Dolorosa - a Patron of Slovakia. William Loviška, academic sculptor, created this extraordinary project of architectonical-sculptor´s work, and architect Ivan Jarina made it into final drawing documentation. In timepiece niches, six plastic works of personalities from Slova

k history (made from bronze) are worked out. These are as follows: Prince Pribina, King Svatopluk, Anthony Bernolak, Ludovit Štur, Milan Rastislav Štefanik and Andrew Hlinka. As a heart of this timepiece, it is dial-plate with astronomical data, known as „astrolab“, really characteristic subject. All these astronomical data were planned specially for Stará Bystrica ,on base of their geographical position. As a very interesting phenomenon, it is a fact that timepice of Stará Bystrica shows - as the only one of the world - so called „right sunny time“. Except of this, you also get the information from astrolab, the position of moon on the sky, each moon stages or position of sun, within scope of zodiac circle. The timepiece  has two bells, hung inside small to

wer. One of them follows the time and the second one rings during promenade of seven Apostles, engraced from poplar wood. Just below timepiece, you can find tourist information centre and small souvenir shop, including sale gallery of works, made by professional and non-professional artists.

No Tediousness in Starý Bystrica

It is true that, especially in the course of past time period, Stará Bystrica is connected, first of all, with Slovak Timepiece, but this locality is able to offer its inhabitants and visitors much more attractive experience. You can visit  Leasure Time Centre, fully used not only by children, but also their parents. Small kids can play on really nice playground. In community centre, multi-purpose playground with artificial covering, is available. Mini ZOO Garden belongs to another place of interest, which is not to be found in many towns. It is a fact that the space is not overcrowded with many animals, it is reallly worth to visit it. However, the ZOO is open during weekends only. and the entry fee is symbolic. 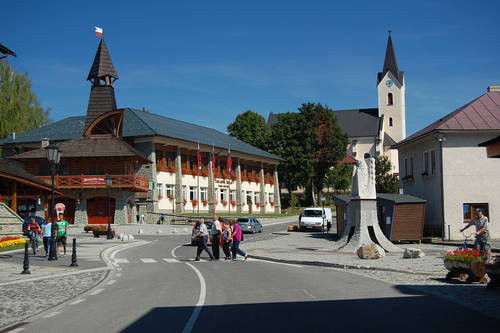 Central square, known as St. Michael Archangel Market, undergone an expressive and costly reconstruction but all such works proved to be very profitable. Now, Stará Bystrica

belongs to most beautiful communities of the region, I visited during my travelling throughout Slovakia. Just on the square centre, a building of Municipal Office, Bielik House, Kolen House or Križko House are located. All buildings were reconstructed or re-built in very carefull way. So called Brigand´s Bastion is quite interesting from architectonical point of view. The complex will surprise you not only with its appearance (look) but offers also a relax and pleasant sitting places on summer terrace. In front of bastion on St. Michael Archangel Market, a Brigand´s Stone is placed, brought there from Čeratin Hill. According to the legend, everybody, who will dance on that stone, his secret dream would be fulfilled. Even a building of grammar school, situated just behind the square, makes very nice and well-done impression. Any housewife could  be envious of the fact, looking at marvellous bloomed flowers in the windows. The church of St. Michael Archangel (1982) belongs to another important dominanta of the community. The building undergone general reconstruction works recently, so that now, the church is really wonderful, no doubt.

In Stará Bystrica is always something on. At the end of summer holidays 2011, a new look out tower, on Bobovec Hill, was open for public. This hill is not the highest in community cadastre, but it is easy accessible, walking upstairs just from the biggest attraction, i.e. from Slovak Timepiece. At the same time, the hill is quite well visible from the valley, so that this construction became another dominanta of Stará Bystrica. The look out tower is approx. 17 metres high. The complex was constructed from stones, wood and fire-bricks. At the beginning of September, even newly reconstructed St. Florian Park was solemny open, too. Provided you visit sometimes Kysuca district, you would not miss Stará Bystrica, for sure. Even short stop there may leave nice memories in your mind.