The small town Krupina lies in the northwest part of Krupina plains, in the Bzovice uplands, posed foothills Štiavnica Hills. Among its most important rivers is the Krupinica and stream Bebrava. Not that well known Bebrava, running through the town of Bánovce above Bebrava, but the Krupina – the shorter and less known one – is it the river where was built the same name Bebrava water reservoir. Krupina is situated on slightly elevated river terraces and gradually grows to moderate or steeper slopes Krupina plains. Every tourist will be charmed of beauty of the surrounding natural environment and beautiful attractive scenery, what he can see on a walk around. To the western part of the cadastral territory of the city extends protected region of Štiavnice hills. There are also located a several smaller protected areas eg. National Nature Reserve Masiarsky bok, Nature Reserve of Holy Hill or National Nature Monument Štangarígeľ (Krupina bralce). Recently, the city visitors and domestic as well are increasingly interested in little-known historical site Štrampľoch. And therefore we are going to say little more in today´s article.

Štrampľoch or the Turkish wells

The most interesting monuments of the town of Krupina is the old stone quarry, nicknamed by domestic as Štrampľoch, but in the general public better known as the Turkish wells. It can be found on the east of the centre on road between Krupina and Teplička recreation area. History of the place is still unclear and shrouded in mystery. From the title is obvious that it was a quarry (Steinbruch in German = quarry), but is not clear yet why the part of it is named as Turkey's well. It is possible that stone from this quarry was used for more buildings, whether

medieval or modern, in the city Krupina. It could be used for example in the construction Krupina walls, gates, a churches or chapel. It is expected, that probably was not just the quarry, but also a kind of dwelling which the Turks used as a shelters in the 16th and 17 century. The actual age of the dwelling is not easy to pinpoint. Some historians and also local people believe that part of this space was used as a temporary housing even in the 19 and early 20 century. It can´t be cut out that once the local area could serve as cellars, which were later sealed with water. Even in their vicinity, there are more cellars carved into the rock in which was placed and produced wine, because in the Krupina land grew plenty of grapes until the 19th century. It also could be a spa. From the outside of the quarry are in fact seen some stone stairs and up the remains reminiscent of the terrace. Another interesting of quarry is a stony place carved into the rock formation, but the origin and purpose is still mystery. 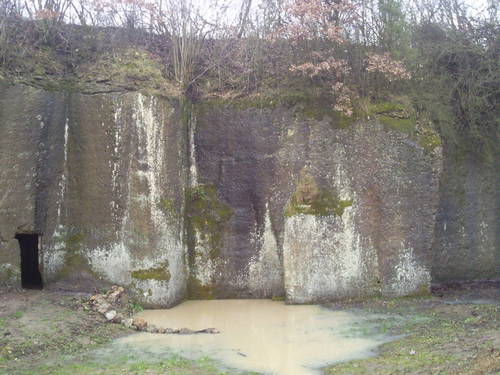 In the last period this area has undergone a revitalization and thorough cleaning. From the stony room filled by water was got water and sludge, but also municipal waste collected. There are table, benches and also information board. The new area was planted by greenery. From the city centre you can comfortably get there by a new hiking trail.

In the next part of story you can read about Krupina guard tower - Vartovce.