Nevertheless, even the persons looking for active way of holiday-spending, find their topics. So, in summer, you will feel enthusiastic to have the bath in pure and rather warm water (the temperature exceeds 20 °C) directly in city centre. On the contrary, in winter, you will be satisfied with skating possibility along frozen cannals or in space reserved for public in a square in city centre.

So, Sweden allured us for long time. To tell the truth, we intended origin

ally to visit far North where the Laplanders live, breeding their herds of reindeers. Anyway, during internet surfing, we discovered by chance the offer of very cheap air-tickets (direct return flight for two persons, including all fees, cost EUR 56 only!), and the decision was made. Our Scandinavia discovering can start in Stockholm, why not? Nevertheless, our excursion was not planned, we did not save any money for such purpose. So, we decided t

o save something, for the accommodation at least, and we found in internet web-site cosy hostel at reasonable price conditions, situated only 10 minutes´ walk from central railway station, just in city centre. From there, we started our discovery excursions. Although we spent in Stockholm only three days, we did not caught to visit nor a half from all targets we planned. Never mind, we have a reason for next visit sometimes in the future.

We landed late in the evening at Skavsta Airport. Nevertheless, it was no serious problem, as regular bus lines operated from the airport to the city. The accommodation in hostel was possible at any time, as the entry gate was available to be opened by means of special code, which we received by e-mail in a moment of our

reservation. On a wall at the entry we found an envelope containing magnetic card, functioning as key-room. We were very surprised with a standard room equipment expected for us. Snug small room, including well equipped common kitchen, and WC was on the same first-class level. The kitchen was used for preparing of breakfast only, as while making acquaintance with foreign countries, we prefer to taste local meals on spot. At the same time, we appreciated very much that in social rooms, four computers were available, connected to internet as well as many information leaflets, offering, except classical tourist targets, even various famous and popular restaurants, bars, sightseeing navigations and other places of interest, we did not know before our departure.

Vasa - War Vessel which was never in Fights

I am not great lover of history, and  prefer to admire all beauties walking through involved narrow streets or visiting different outlooks, where the town or countryside could be well seen from all parts, but this museum, dedicated to Vasa fighting vessel, was really a shock for me.

Vasamuseet belongs to topic museums in Stockholm, no doubt. It is dedicated to the only Vasa Ship, which was one of greatest fighting vessels of that time. Frankly speaking, this vessel was never participated in some battle. However, just on the occasion of its first navigation on 10th August 1628, the ship sunk down, owing to serious construction

defects, in a distance of 100 metres from Djurgarden Island, where the museum is built at present. At that time, nearly 50 sailors (from total crew of 150 members) found their death on bottom of Baltic Sea. The only objects which managed to be rescued just in 17th century, these were the weapons. And incredible 333 years passed when Vasa was succeded to be lifted above water level. It is a merit of Mr. Anders Franzen, private investigator. He started to search for since 1950, and in 1956, he managed to discover Vasa wreckage. Nevertheless, the ship-extraction took several years. At first, the divers had to clean a space below ship-body, in order six lifting ropes could be used during its release from the bottom. Finally, in 1961, the ship was succeded to be transported into dry dock-yard. So, such colossus was perfectly attended there, in order to be admired for many years in the future. Apart of the ship, the team managed to rescue more than 14000 of wooden objects, including 700 statues (they were settled, after attendance and conservation, on their original place in the vessel). To tell the truth, in 17th century, these fighting ships served not only as war machines but as sailing palaces. Vasa measured, from mast top to keel, 52 metres, and from prow up to stern 69 metres. The colossus had the weight of incredible 1200 tonns and had three masts, where at least 10 sails could be fixed. Thanks to good conservation qualities of cold waters of Baltic Sea, we can admire this ship in nearly intact state. Just more than 95 % of the ship is preserved in its original stage. Vasa Museum is open for public seven days in a week. The film about the ship, which forms a part of museum sightseeing, could be followed in 16 language versions. If you bought Stockholmskortet (Stockholm Card), I mentionned in previous chapter, you do not need to pay any fee, entering the museum. 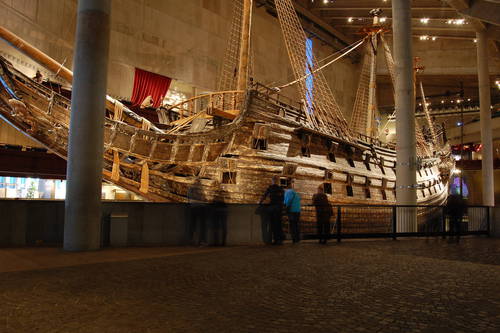 Do You Know That? The Oldest Warship In The World

Published: 25.3.2012
Our journey Scandinavian tour will introduce us first the Sweden, where it will be our destination Vasamuseet Stockholm Museum, hiding one of the most beautiful ship the world.